Maci Bookout and Cheyenne Floyd organized a ‘family reunion’ with the casts of ‘Teen Mom OG’ and ‘Teen Mom 2’, but when two rivals came face to face, drama ensued.

Teen Mom: Family Reunion premiered on MTV on Jan. 11, and the new spinoff showed Maci Bookout and Cheyenne Floyd organizing a San Diego get together for the casts of Teen Mom OG and Teen Mom 2. That means that everyone who’s ever starred on both shows got invited — including Farrah Abraham and Jenelle Evans. The former will show up later this season, while the latter claimed she was later uninvited, but that’s neither here nor there. Right now, we’d like to focus on what went down during the first hour of Family Reunion. 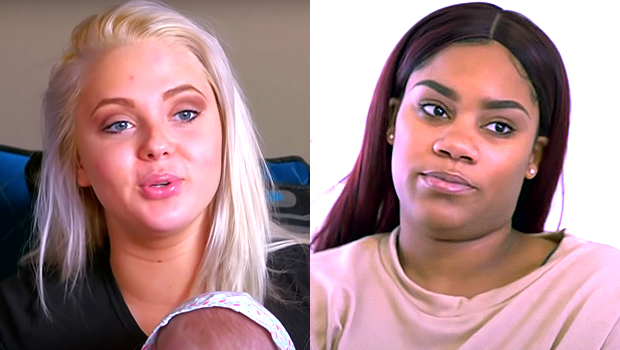 After Maci and Cheyenne arrived at the resort(?), they were joined by Amber Portwood, Leah Messer, Jade Cline, Ashley Jones, Brianna DeJesus and guests of their choice. Amber brought ex Gary Shirley, Brianna brought her sister Brittany (shocker), Ashley brought her now-husband Bar Smith (we’ll get to that later), Cheyenne brought fiance Zach Davis and the other ladies arrived solo. Others like Farrah are expected to join later in the season, but the initial crowd kicked things off with a bang.

For example, when Ashley and Cheyenne went off to the side to talk, Cheyenne noticed Ashley wasn’t wearing her engagement ring, so she asked Ashley if she and Bar had broken up. Interestingly, Ashley revealed they had actually gotten married — secretly — but they’re currently having problems and now heading for a divorce. Ashley claims that Bar lost his motivation once his ankle bracelet came off, and she wants him to stop being so lazy.

Then, Jade revealed that her on-again/off-again boyfriend Sean Austin is in rehab. A few of the girls offered words of encouragement, but Jade was thrown off by Ashley’s sweet words. Outside of the show, they often feud on social media, so Jade didn’t think Ashley was being genuine. And later, when the group participated in an activity with a life coach, Brianna (Jade’s good friend) called Ashley “fake”. Brianna and Ashley have also fought online, so Ashley wasn’t too surprised by Brianna’s call-out, but the conversation that followed got tense pretty quickly.

At first, Ashley was open to the criticism she was receiving from Jade and Brianna, even though a few of the other girls asked everyone to back away from each other. The group thought Ashley, Jade and Brianna were getting too close to each other, and they feared a fight might break out. However, Ashley insisted she had no intention of fighting the other girls — she just wanted to let them air out their feeling so the issue could be resolved. But as soon as Jade shot down Ashley’s apology, things turned ugly. Jade basically lunged at Ashley and security had to intervene.

Afterwards, when the group dispersed, the life coach tried resolving things. But it didn’t work — Ashley soon jumped out of her chair and started yelling at Jade, and Jade yelled back. The majority of the group tried diffusing the situation, but Ashley kept it going by taunting Jade and twerking in her face. Then, in the final few seconds of this week’s episode, someone lunged at someone else. It was hard to tell who it was, but everyone started screaming and the episode ended. So it now looks like we’ll have to wait until next week to find out what happened, but it didn’t look good.

10 Sep 20
When was the last time you cleaned your car seats? And no, we don’t mean…
Lifestyle
0