Drugs, illness and ‘clown feuds’ – what came next for ’90s EastEnders pinups

Rachel Clarke used to be a television journalist, but in her late 20s after making a series of documentaries, she retrained as a doctor. Now she is both a masterful writer and a passionate advocate for quality palliative care.

After the recent critical success of memoirs and books on dying, Clarke knew she had an audience for Dear Life: A Doctor’s Story of Love and Loss, and that as a palliative-care specialist her perspective was different enough to keep readers engaged. 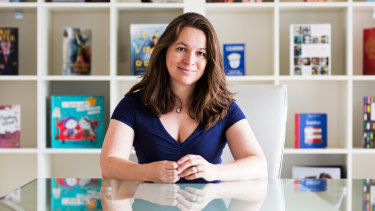 Rachel Clarke says she is genuinely relaxed at the thought of her own death.Credit:Lucy Gallant

‘‘I really wanted to share my personal experience of grief around my father’s cancer with my role as a palliative-care doctor. I wanted to show that no matter what amount of professional training you have, none of that prepares you for the cataclysmically painful experience of losing someone you love. There were three major characters: myself, my father and death itself.’’

She cites Maggie O’Farrell’s memoir, I Am, I Am, I Am: Seventeen Brushes with Death, as a book that once read it’s impossible to feel the same about life again.

‘‘For me, talking about death is a life-enhancing act. It’s a way of confronting what we all know – deep down – is inevitable. Our standard human response to our mortality is to ignore it. Rolling it around in our consciousness and trying not to flinch from it is really living our lives.’’

While Clarke’s storytelling skills have been sharpened by a career in journalism and being an avid reader, it is her ability to listen that infuses her book and her role as doctor with enormous compassion and vulnerability.

‘‘One of the hardest things to do in a world in which everything happens at a million miles an hour is to do something as simple and unusual as to stop and listen. The sheer act of listening is a way of telling that person that you’re interested, you care about them and you respect them enough to give them time. That applies to me listening to my daughter’s dramatic playground crises at the end of the day, or listening to a patient confiding in me something they’ve never told another living soul their entire life.’’

Clarke’s role as a palliative doctor in a hospice, Katharine House in the English midlands, means coming face to face with the most joyful and heartbreaking circumstances of humanity every day.

Dear Life recounts the many patients she’s encountered and been fundamentally changed by: the dying husband who tries to hide his pain from his wife, or the wife who chats and smiles to create a sense of lightness and then collapses outside because she’s so distraught at losing her husband.

‘‘I can genuinely say Katharine House is infused with more joy and beauty and grace and wonder than pretty much any other place I know,’’ Clarke says. 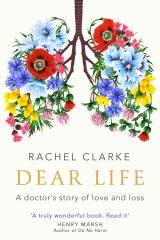 ‘‘That is because, although the pain and the anguish and grief infuse every room, at the same time all of that grief is the flipside of love. The more you love someone, the more it hurts as you lose them. The joy comes from observing, over and over daily, just how much visceral, bold love there is in a hospice. In a world of global warming and fearfulness, this is the ultimate antidote. Human beings showing the utmost of what we’re capable of, every day.’’

Far from morbid, Dear Life is a reminder that doctors are not omniscient, all-powerful and clinical practitioners in sterile white coats.

‘‘I hope when my children have grown up, it won’t be even slightly unusual or radical for a medical institution to squarely put a patient’s hopes and wishes centre-stage. It’s not that doctors are knowingly causing harm, but the effort not to hurt patients drives over-medicalising, over-invasive treatment,’’ Clarke says.

‘‘In my own case, I’m genuinely relaxed about the thought of my own death in the sense that I’ve lived a healthy life for 47 years, which makes me an exceptionally lucky person. Who am I to even consider railing at the idea of dying at 47? I’m lucky to have wrinkles, lucky to have grey hairs, lucky to wear my first pair of reading specs. I haven’t planned my funeral yet, but I have made an advanced directive so there are no heroics for me if I end up in a serious coma after a serious car crash. I think that’s a really valuable and important thing to do.’’

“The Call of the Wild” editor David Heinz has worked on “The Jungle Book” and “War for the Planet of...

Climate change, pollution could kill most coral reefs within 80 years