Marina Prior. OccupationSinger and actor. Age 56 Relationship status Married. Best known for Starring in Phantom of the Opera. Currently Rehearsing for Carols by Candlelight. 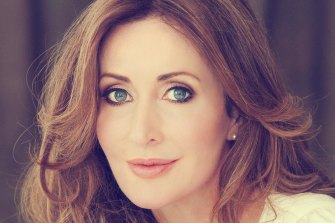 ‘It was love at first sight when I met my husband, Grant. I was talking to him and thinking, “Oh, there you are. You are the one.”

Way before I was born, my father, Graham, was a merchant seaman for a shipping company. He had a great love of the sea, which might be part of why I was named Marina.

He had a deep sense of romance and yearned for an exotic life. It took him and my mother, Patricia, from Melbourne to Port Moresby, which was where my older brother Colin and I were born and lived until I was two.

My father loved literature and dreamed of becoming an academic. But he had to leave Melbourne High School early to care for his unwell, widowed mother. He joined the public service, and until he died in 2014 he carried with him the sadness of his unfulfilled dreams.

Like my father, my mother had a beautiful voice. She was a secretary in the city in the 1950s. She belonged to the Melbourne Railway Choir, and they sang in Flinders Street Station. From her I gained that stirring of your soul when you sing collectively.

I was a dramatic and flighty teen, but I was always involved in music. I played the guitar and sang. From the age of 15, I performed in acoustic folk venues in Melbourne, like the Green Man.

My first crush was on a hugely good-looking boy named Anthony. He lived near us in Mount Waverley but didn’t know I was alive. My girlfriends were tanned, blue-eyed, blonde and skinny. I was this pale girl with curly brown hair and braces who couldn’t get a date.

I was academically driven, and when I finished year 12 I got into law at Melbourne University; music was my second-place offer. I thought I should do law, but Dad sat me down and asked me what I truly loved. Obviously, I said music. I said I thought I should have something to fall back on, but he told me to be brave and to do it. I am so grateful to him for that.

I finally got lucky with a boy named Chris when I was 17. He was the brother of a school friend and we went out for a year. We had nothing in common and were different people.

I was cast as Guinevere opposite Richard Harris in Camelot when I was 21. By then, he was in his 50s. He was famous for being difficult and one night I forgot a line. As we came off stage he pushed me against a wall, framed my face with his hands and yelled at me. He was a bully and I was a nervous wreck. But in retrospect it was one of the greatest things that happened because sometimes you have to be pushed far enough to discover your strength.

Touring with José Carreras [of the Three Tenors] 10 years later, in contrast, was a delight. I thought he’d dictate everything we did, but when we rehearsed a duet and needed to decide when to breathe together, he asked what I wished to do. He was so generous and an utter gentleman.

It was love at first sight when I met my husband, actor Grant Piro. I was playing opposite him in Dirty Rotten Scoundrels. I remember standing at the top of the stairs at a rehearsal, talking to him and thinking, “Oh, there you are. You are the one.”

Grant is funny and passionate in an Italian way, and together we share five children: Olivia, 23, AuthoringCampbell, 18, and Jacob, 15, from my previous marriage [to actor Peter Lowrey], and Jackson, 19, and Madeline, 17, from his.

I spend a huge amount of my life with David Hobson – we did 38 shows together this year. He is like a brother to me. Although known as an opera singer, he excels in nearly every musical style. As a person David is humble and clumsy, loveable and a goof.

This year will be my 29th Carols by Candlelight. I used to watch it on TV as a child. There’s such a wonderful feeling backstage, as it’s full of friends. On Christmas Day, my family enjoy lunch and then we have a party at night. Lots of people come to us and we eat, drink and all perform. It’s my favourite time of year. I love its music and joy.

Marina Prior performs in Carols by Candlelight at the Myer Music Bowl, on Nine from 8pm on Christmas Eve.

This article appears in Sunday Life magazine within the Sun-Herald and the Sunday Age on sale December 1. 19 May 21
Mindy Crawford gave birth to her daughter at just 33 weeks last August. When Crawford…
Lifestyle
0