Immigration Minister Alex Hawke holds in his hands Novak Djokovic’s hopes of winning a 10th Australian Open tennis title as he decides whether to allow the world no.1 to stay in the country after his visa was cancelled.

The Liberal MP last year made one of the highest-profile policy decisions of his career when he allowed the Murugappan family of asylum seekers to leave Christmas Island and instead live in community detention in Perth while their legal action played out. 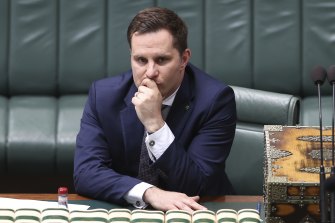 Hawke has been the Liberal member for the western Sydney electorate of Mitchell since 2007. The 43-year-old grew up in the area, attending Cumberland High before taking on an arts degree at Sydney University.

He joined both the Liberal Party and the Army Reserves as a teenager in 1995. In 2000 he left the Reserves – having achieved the rank of lieutenant – but remained a loyal lieutenant in the Liberals, working for a series of state politicians and then federal minister Helen Coonan.

After winning the seat as the Howard reign ended, Hawke’s frontbench career began in 2015, once Malcolm Turnbull became prime minister. He’s spent time as a junior minister in the Treasury, immigration, home affairs, defence and foreign affairs portfolios as well as seven months as special minister of state in charge of the electoral system and politicians’ expenses.

What does he do?

Hawke is perhaps better known as a factional powerbroker for the centre-right of the NSW Liberal Party than he is as Immigration Minister.

And he’s been at it for quite a while. A 2005 article in The Monthly describes his fight with James Stevens – now a federal party room colleague – for the presidency of the Young Liberals.

“It’s very addictive, politics,” Hawke was quoted as saying. He also said he was interested in being influential in politics but that didn’t necessarily mean being in Parliament: “In some ways it’s more fun on the outside. It gives you more power.”

These days, in Parliament, he shares a desk with Victorian powerbroker Michael Sukkar, the Assistant Treasurer.

In 2021 he became involved in a factional tussle in NSW that spilled over into several nasty preselection contests, including in the marginal seats of Lindsay and Reid, held by first-term MPs Melissa McIntosh and Fiona Martin.

He is Morrison’s personal representative on the Liberal Party’s NSW executive and has become a divisive figure within the state division because of his tight control of factional numbers.

Hawke is also very close personally to Morrison. They are part of a bible study group, along with Stuart Robert, that has met each sitting week since they were elected in 2007. The tight-knit group was integral to corralling support for Morrison when Turnbull’s leadership was challenged in 2018.

In his first speech, Hawke told Parliament: “I am a big believer in the ideas of grace, forgiveness, redemption and a second chance – Christian values that have seasoned secular culture in a way that makes it more humane and our world more inhabitable.”

Now he has to decide whether to allow Djokovic to stay in Australia and compete for a 10th title, or kick him out for this year and potentially three more years. 20 Jan 22
DEAR DEIDRE: I LOOKED through my girlfriend’s phone last month and found a message with…
Lifestyle
0