Cheering the Lionesses to victory! FEMAIL takes a look at the WAGs and BAPs who will be supporting their footballing ace partners at Wembley Stadium in the Euro 2022 final as England take on Germany

The Lionesses have roared into the final of the Women’s Euros 2022 and will be taking on Germany at Wembley Stadium on Sunday evening.

As the England Women’s team has sailed through their tournament conceding just one goal in five matches, the Lionesses are quickly becoming household names.

Young children are cheering on players like star striker Ellen White and defender Lucy Bronze who are set for stardom after a sensational tournament.

But behind each great woman is a loving partner supporting her all the way.

Here, FEMAIL takes a look at the WAGs and BAPs (boyfriends and partners) of the Lionesses. 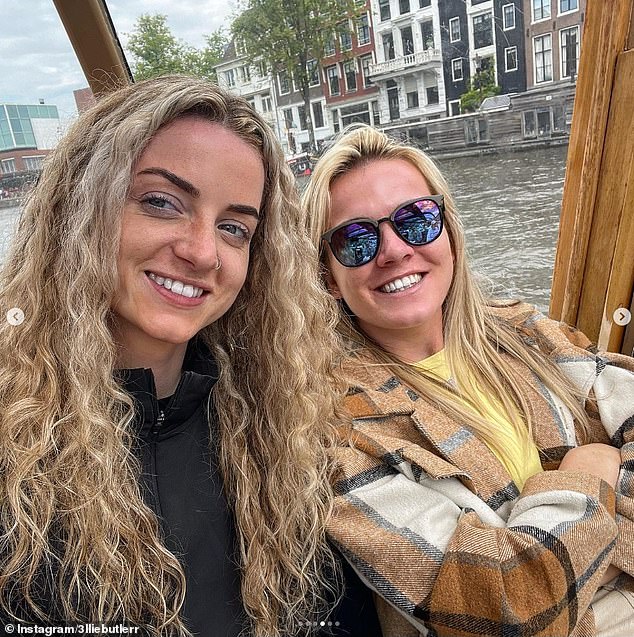 Ellie Butler, who plays for Wolverhampton Wanderers, recently took a trip to Amsterdam with her beau Lauren Hemp 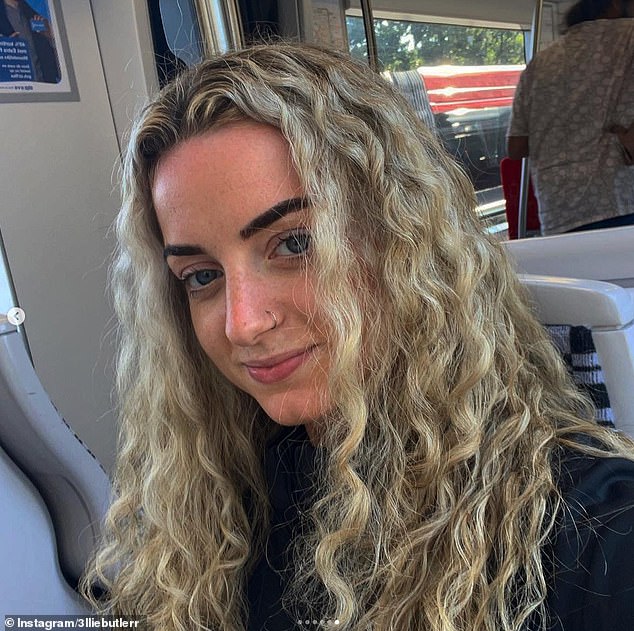 The footballer posted photos of her ‘holibobs’ on Instagram 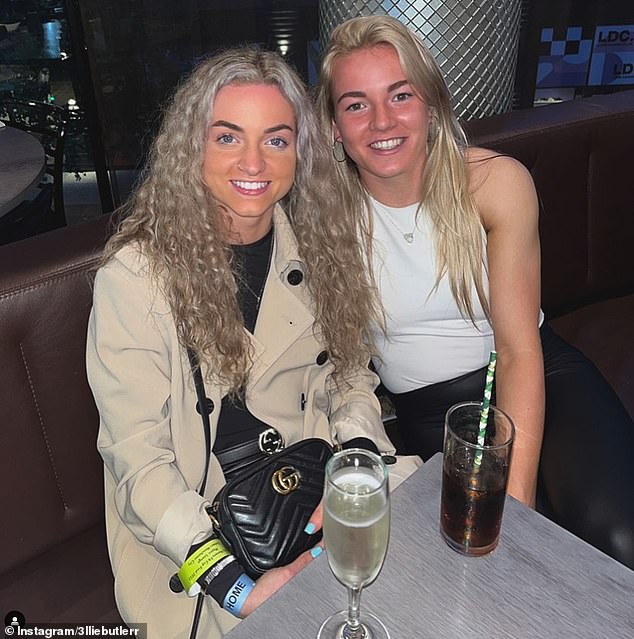 Ellie and Lauren are often featured on each other’s Instagram accounts, with Ellie recently posting photos of her 20th birthday celebrations 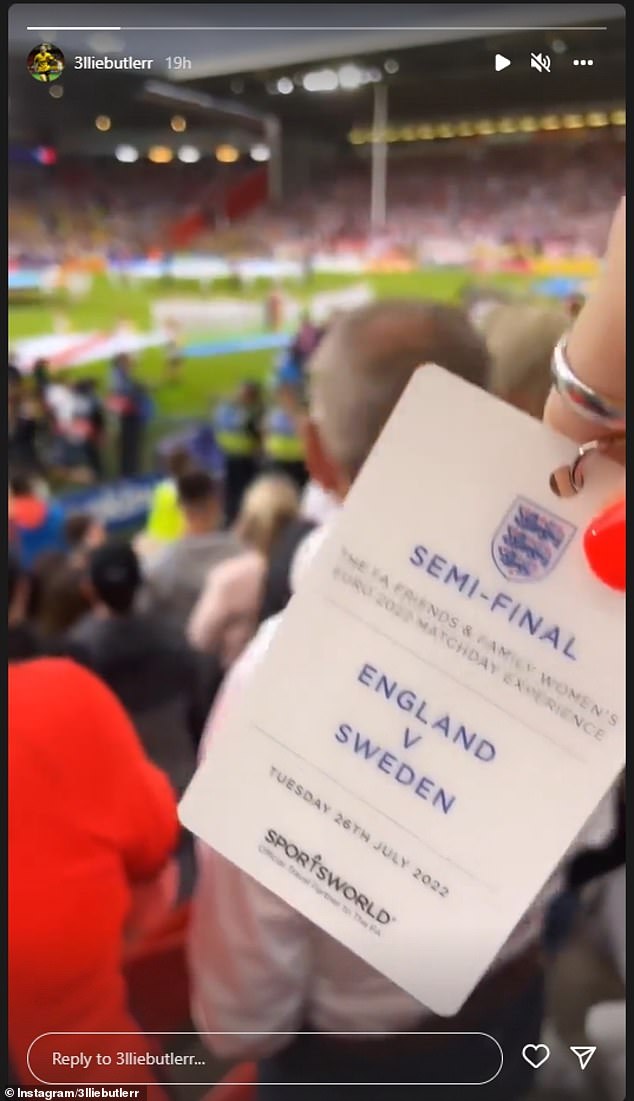 Ellie, who has been in the stands cheering on Lauren since the beginning of the tournament, posted photos of herself with her girlfriend at the end of key matches on Instagram.

Just before England’s semi-final match against Sweden kicked off Ellie, who is also a striker, posted a video of herself in the stands supporting her girlfriend once again as they sailed to victory with a stunning 4-0 win.

Lauren is a frequent feature on Ellie’s Instagram account, with the pair celebrating Ellie’s 20th birthday together at a fancy restaurant.

While it is not known exactly how long they have been dating the pair clearly have lots of fun together, often filming dances with each other on TikTok. 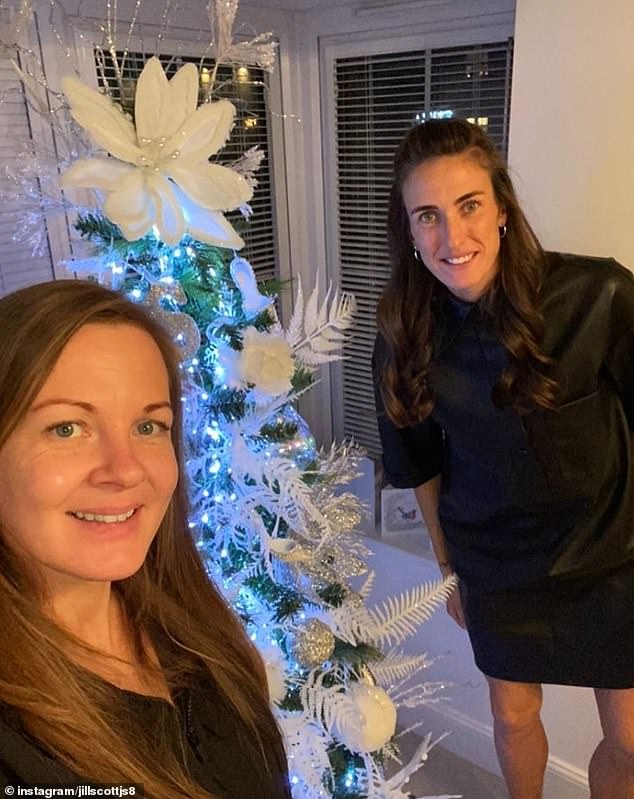 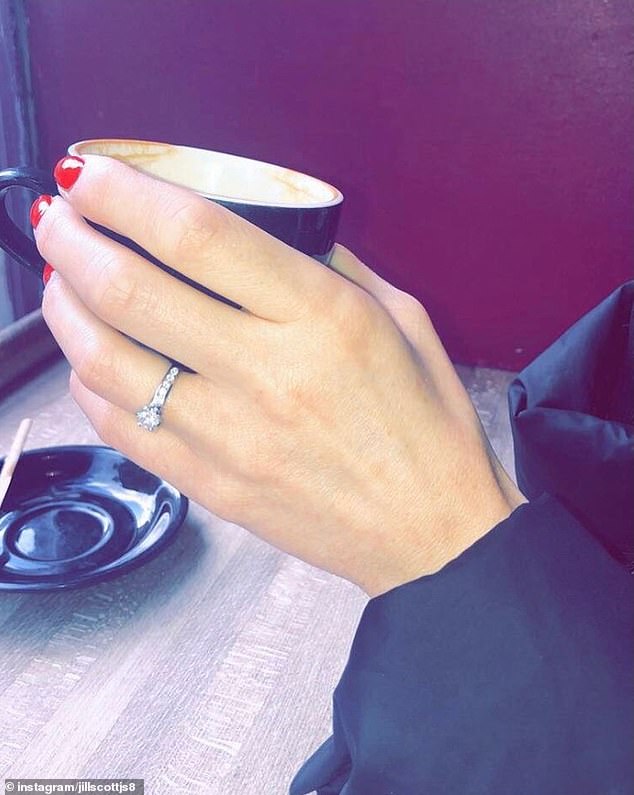 Jill announced her engagement to Shelly on Instagram in March 2020 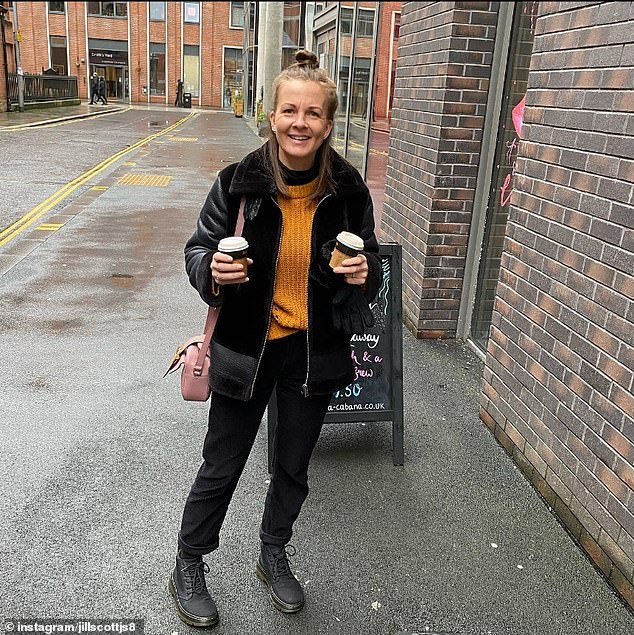 Shelly (pictured) and Jill own a coffee shop, Boxx 2 Boxx coffee, together in Manchester 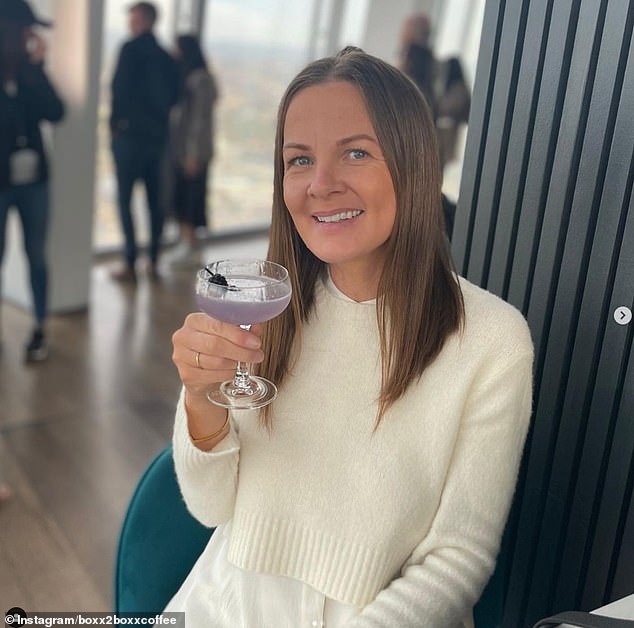 Shelly, 37, was Jill’s ‘walking buddy’ while the pair spent isolation together during lockdown

The pair, who have been together for around six years, own the Boxx 2 Boxx coffee shop in Manchester together.

As the sister of former Lionesses player Rachel Unitt, Shelly has long followed the England Women’s team around the world supporting her loved ones at matches – and she will no doubt be making the journey from Manchester down to Wembley to watch Jill in the final.

Scott, 35, announced her engagement to Shelly, 37, two and a half years ago in a sweet Instagram post showing off her diamond ring.

Posting on Instagram over Christmas in 2020, Jill said she and Shelly had wanted to host an engagement party for their friends and family but lockdown meant they would have to wait.

During lockdown Jill posted photos of the couple out together on their daily walks in the countryside. 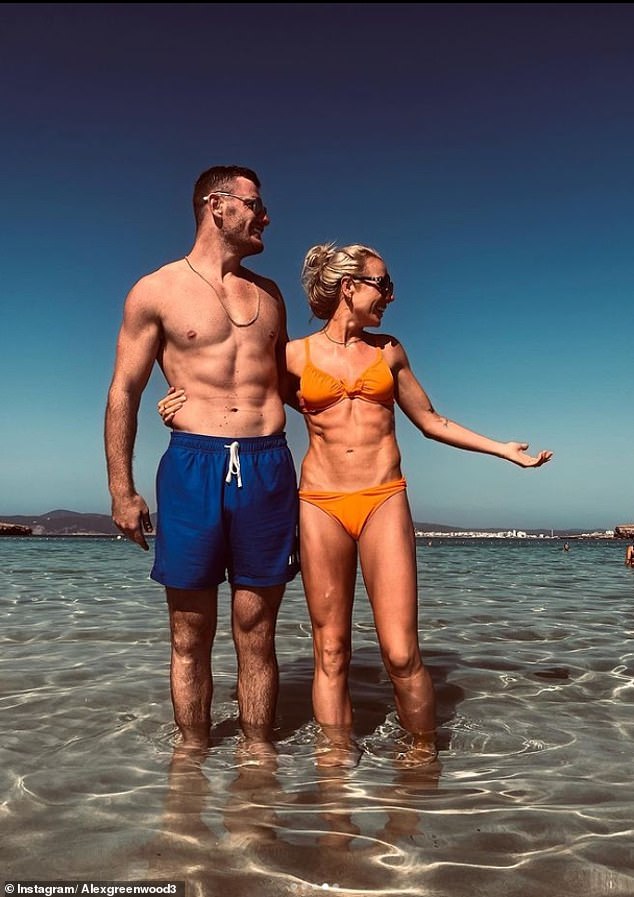 Alex Greenwood and Jack O’Connell, both 28, have known each other since their school days 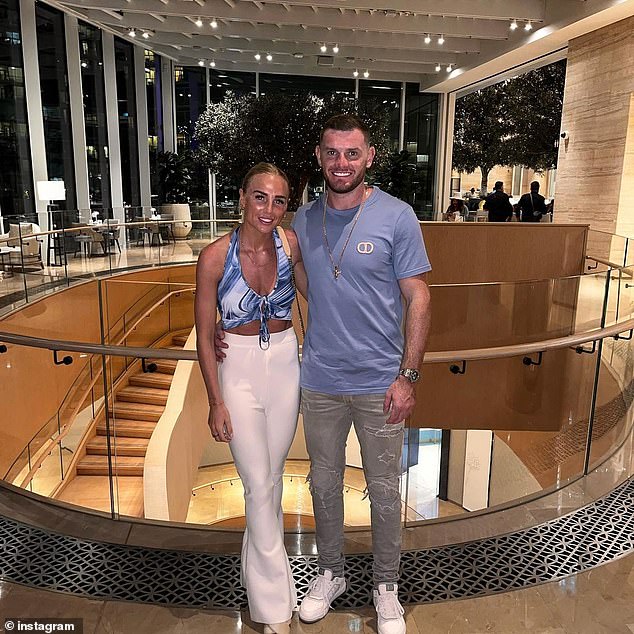 Alex and Jack, who plays for Sheffield United, often squeeze in time to jet off abroad in the break between football seasons 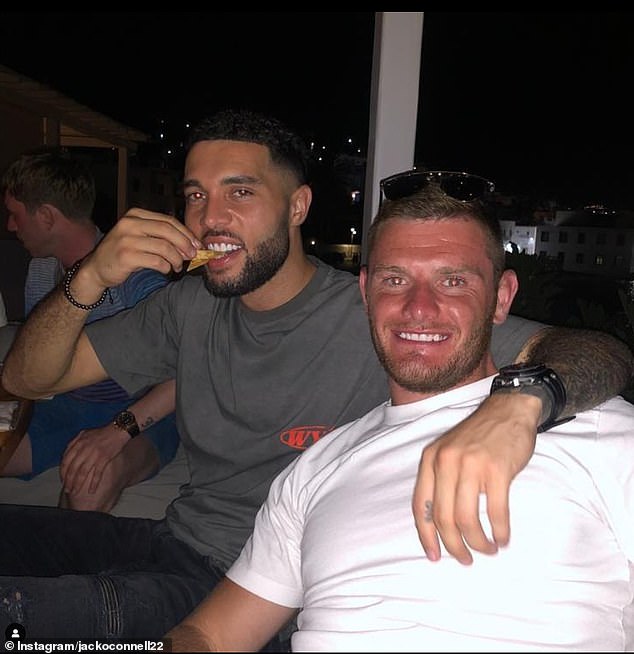 Jack, who is a centre-back just like his girlfriend Alex, was at his home stadium of Bramall Lane to cheer on Alex on Tuesday night 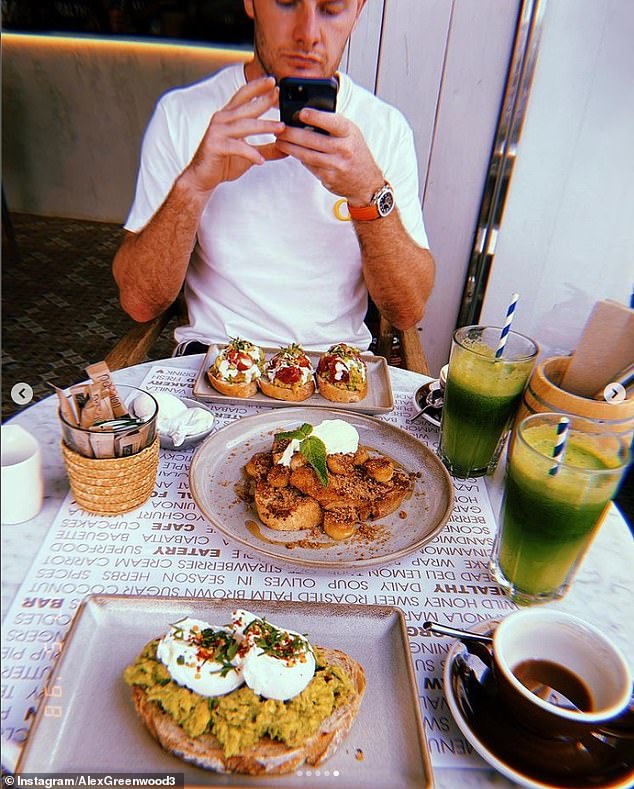 Jack and Alex managed to get away to Ibiza this summer, shortly before Alex returned to the UK to play for the Lionesses

The Championship footballer, whose team was relegated at the end of last season, posted an Instagram story of his home stadium Bramall Lane on Tuesday night, where the Lionesses took on Sweden.

And just nine short weeks ago the couple were enjoying a little time off on holiday in Ibiza.

Alex posted photos on her Instagram account of the pair showing off their incredibly toned physiques in swimsuits as they posed in the sea.

Another photo showed Jack tucking into a delicious-looking brunch.

The couple, both 28, have been together for around eight years after meeting when they were at school in Liverpool and Jack often supports his girlfriend at matches – when he doesn’t have training himself, of course. 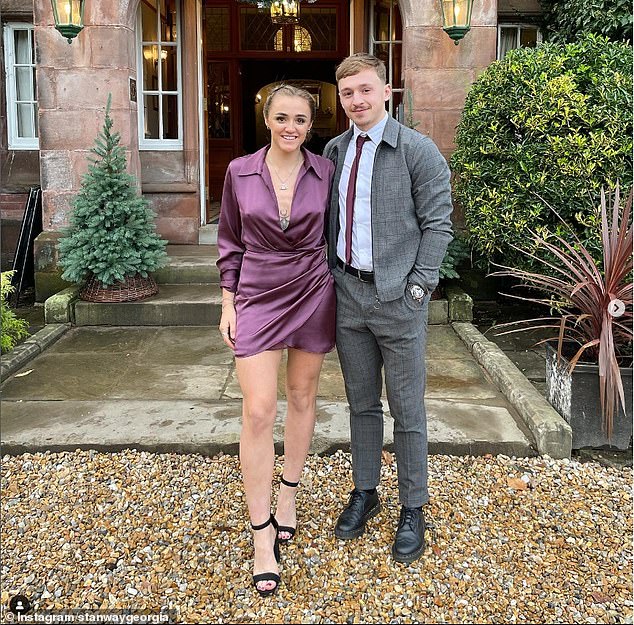 Georgia, 23, and Olly, 24, work in Germany and France most of the time but have a house together in Widnes, Cheshire 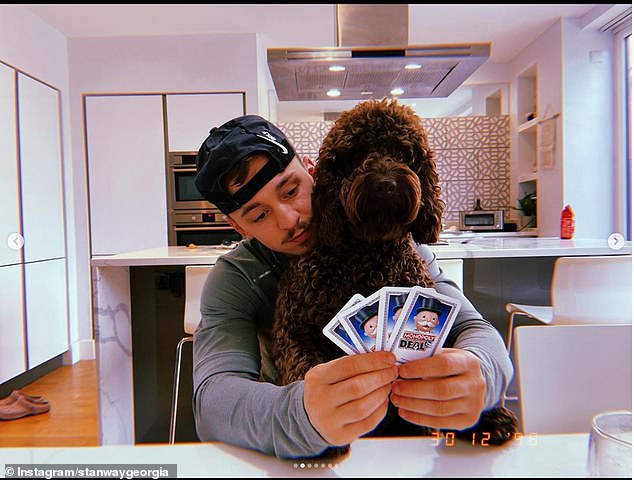 The pair share a dog, who lives in their Cheshire home 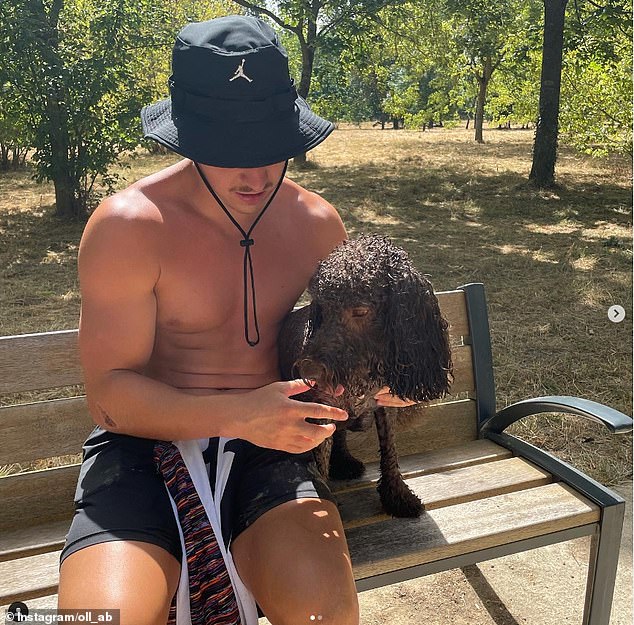 Olly, who is a rugby league player for Toulouse Olympique, shows off his toned physique on Instagram

Georgia Stanway, who spends much of her time in Germany playing as a midfielder for Bayern Munich is dating rugby league player Olly Ashall-Bott.

When the Lioness is in the UK she lives in Widnes, Cheshire, with Olly, 24, and their dog.

Olly himself travels for work, playing for Toulouse Olympique and spending lots of time in France.

While the pair, who met in March 2018, seem very settled, they don’t plan to start a family any time soon.

The Mirror reports that despite many of Olly’s friends getting married, he and Georgia don’t have marriage or children in their immediate future.

During lockdown Olly and Georgia got into fishing to keep themselves busy, and the pair still enjoy their hobby together now. 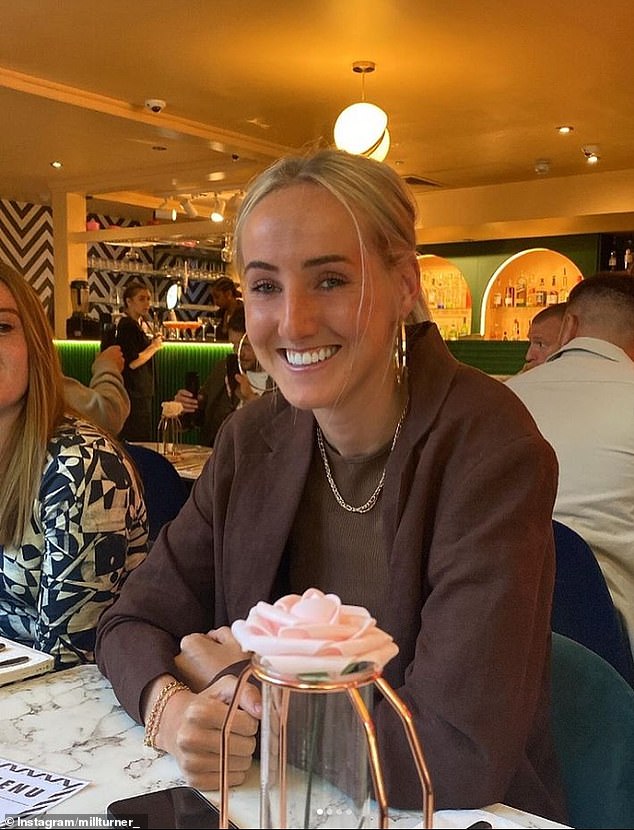 Millie Turner, 26, is also a Lioness who plays at a club level for Manchester United 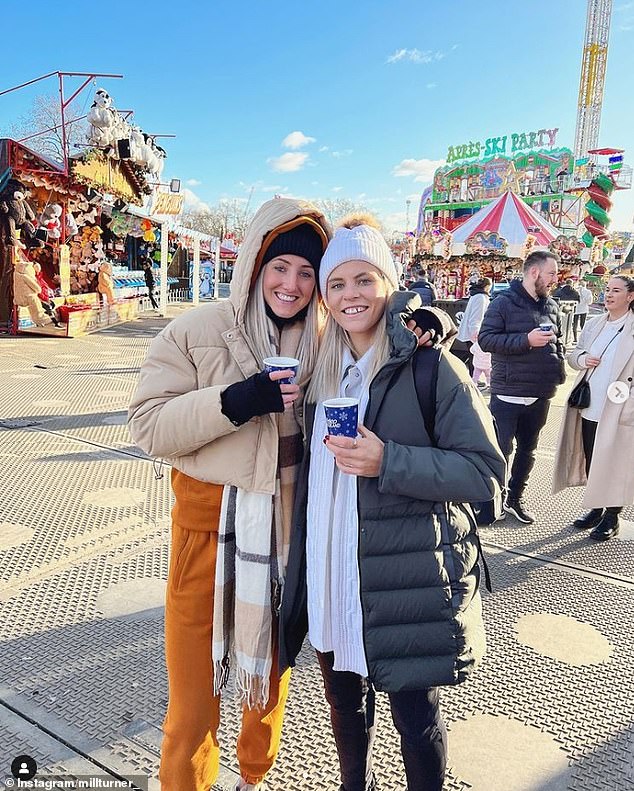 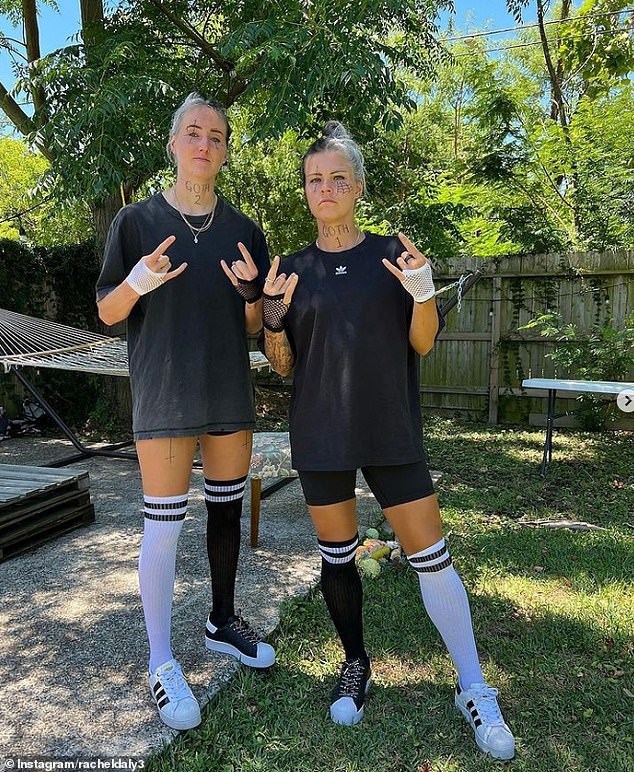 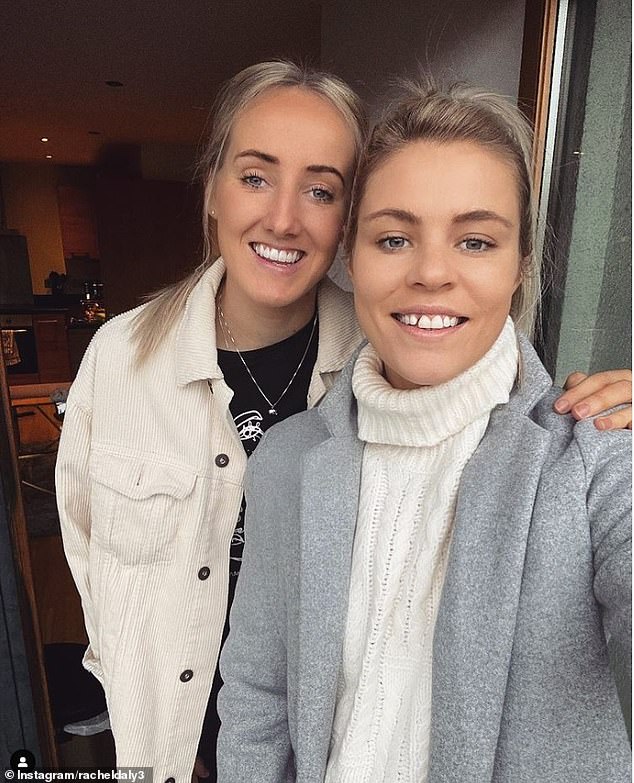 Millie and Rachel spent last Christmas together during lockdown, with Rachel suggesting a difficult festive period was made much better for having Millie by her side 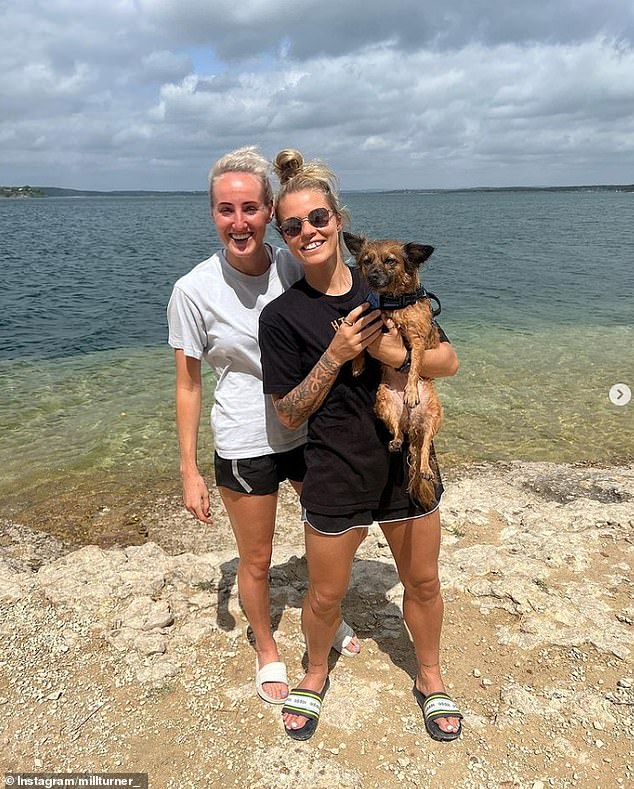 The couple split their time between the UK and the US, where Rachel has a rescue dog

Millie, who plays for Manchester United, has also been capped for England as part of the Lioness squad, and has been pictured training with her girlfriend in the past.

The couple have a long-distance relationship while Millie remains in the UK playing for Manchester United, but according to her Instagram, she finds plenty of time to travel to Texas and see her girlfriend.

Photos show the pair sitting together at the beach and making a fuss of Rachel’s rescue dog.

During lockdown, the couple spent lots of time together, with Rachel posting a picture of the two of them on Christmas Day.

She wrote: ‘The hardest Christmas made as special as it could’ in an apparent reference to spending the festive period away from their families.

After England’s 4-0 win over Sweden on Tuesday, Rachel donned a cowboy hat imprinted with the England flag before strutting around the pitch to celebrate.

Posting a video of her girlfriend on Twitter, Millie wrote: ‘Guys if anyone else has anymore videos of Rach dancing please send them me cos I am laughing my head off.’

She added: ‘You can take a girl out of Texas but you can’t take the Texas out of a girl.’ 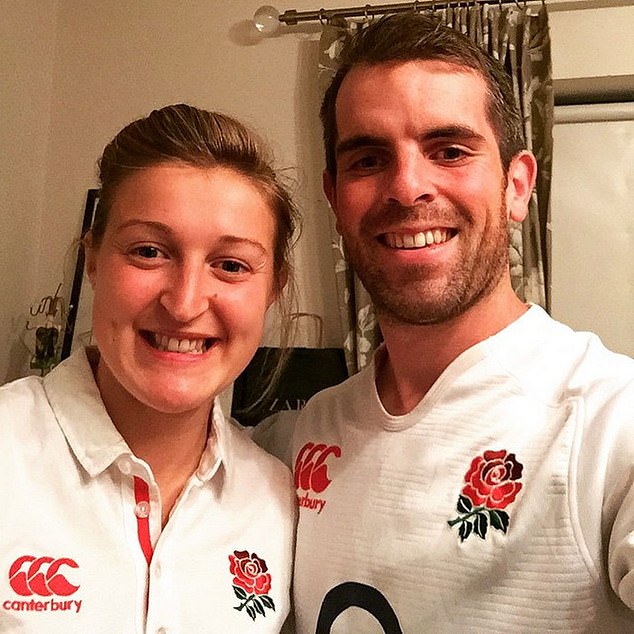 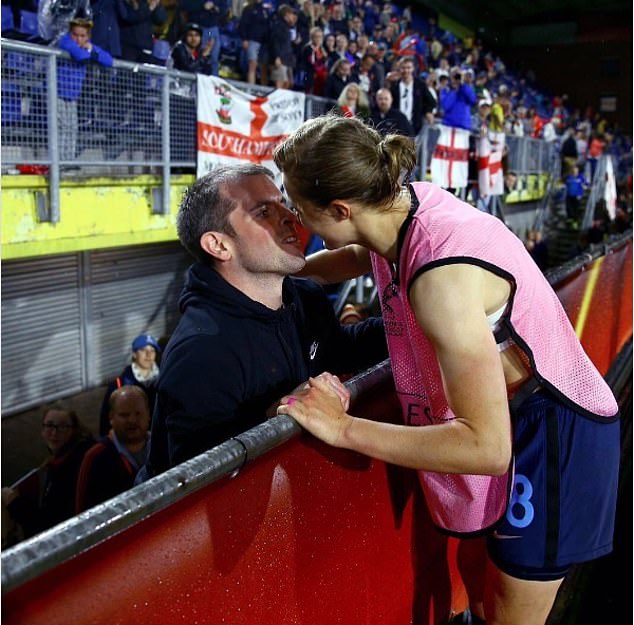 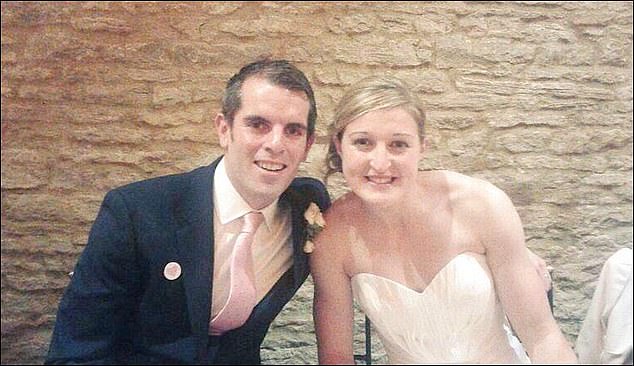 The pair met while they were both studying at Loughborough University and got engaged in 2013 before tying the knot the following year in a barn in Aylesbury.

Callum originally worked for the Nottingham Football Association, but when his wife signed for Manchester City and the pair moved up north he switched jobs.

Two years ago the pair committed themselves to completing a mammoth sporting challenge in support of The Darby Rimmer MND Foundation.

Ellen ran and walked a total of 150 miles in 30 days while Callum committed to running 150 miles during the same time period.

The charity was set up by husband of Lioness Steph Houghton Stephen Darby and Chris Rimmer, who are both living with the degenerative illness.

On Callum’s birthday in 2018 Ellen posted a sweet tribute to her husband on Instagram.

She wrote: ‘Happy Birthday to my favourite husband. The guy who let me take two kittens home instead of one. The guy who travels the world to support me and jumps a fence to kiss me. Think I will keep you forever.’ 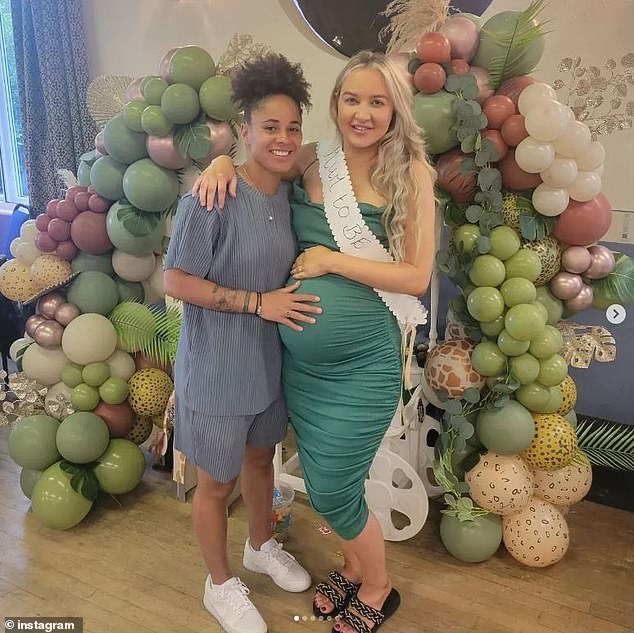 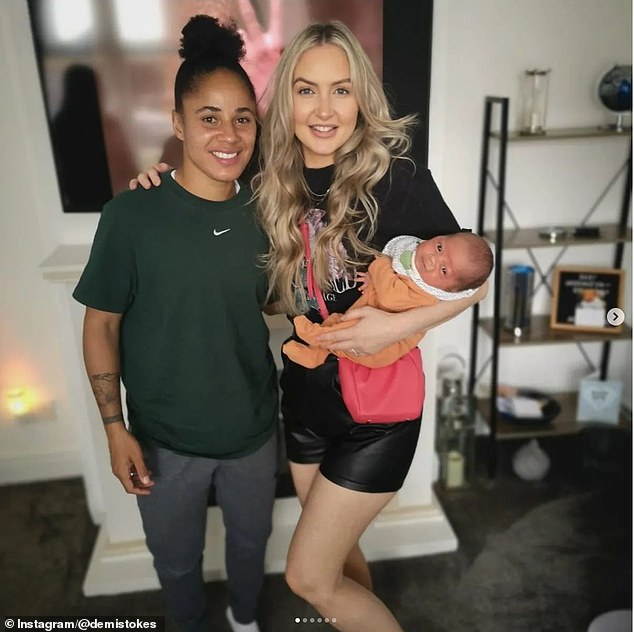 Demi, who plays as a defender for Manchester City, became the first ever player on the first team to welcome a child while playing football 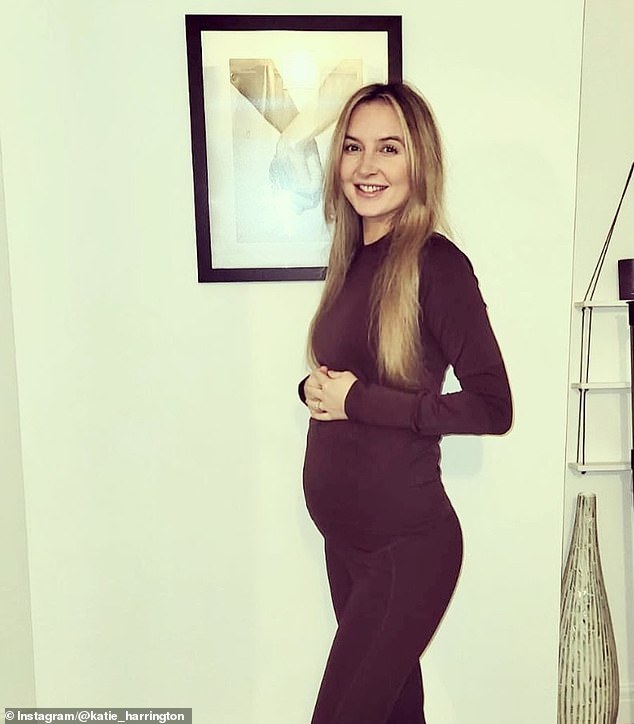 Katie, who works for the NHS, documented her pregnancy journey on Instagram and gave updates on her bump 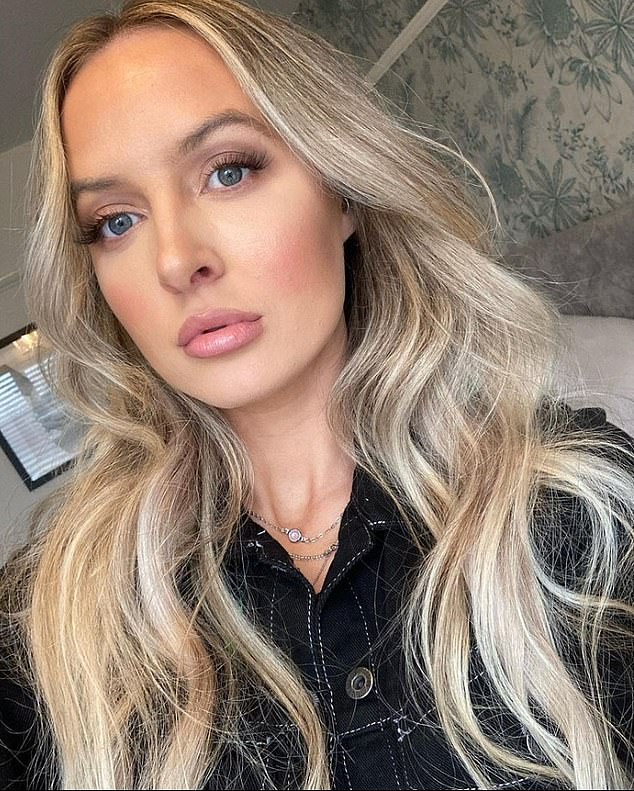 Glamorous Katie is engaged to her beau Demi, who plays for Manchester City 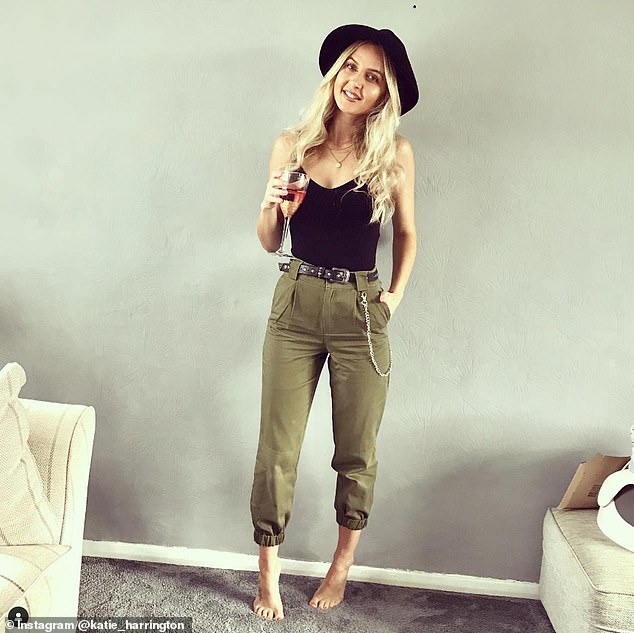 The couple welcomed their son Harlen into the world on 6 May, 2022, with Demi gushing over her little boy on her Instagram page.

Announcing Harlen’s birth, Demi wrote: ‘I am so proud of you Katie despite all the difficulties, you successfully brought our beautiful boy into this world.

‘You have made me the happiest and I will forever be grateful of you!’

Katie documented her pregnancy on her own Instagram page, posting updates on her bump as it grew.

She wrote: ‘Preparation is underway for our baby’s nursery & I’m feeling a lot of movement in there which feels like acrobatics.’

After Harlen’s birth, Demi’s club Manchester City wrote about the defender’s venture into motherhood as the first woman to become a mother while still playing professional football for the club.

The club wrote: ‘Naturally, the family have been inundated with warmest wishes and congratulations and their wonderful news marks another pivotal moment for women’s sport, as Demi has become our first first-team mother.’

Demi said: ‘It’s so important that I share my story,’ Demi declared. ‘I’m open about it because I want to make it easier for other couples and help other people.’ 12 May 22
NBC has opted not to move forward with its comedy pilot “Hungry,” which originally starred…
Lifestyle
0