Opinion: Let The Women Of Louisiana Decide For Ourselves

If one can measure progress by the volume of pollution and traffic congestion, Dhaka must be one of the most progressive cities on earth. In the two years since my last visit the fallout from a boom economy means that everything seems to have grown grimier, more manic, more chaotic. At some stage the construction sites will all be skyscrapers and a new rail system will offer better transport options, but as is so often the case in urban Asia, things have to get worse before they can get better. It's only in Sydney that the more money the government spends on transport the worse things become.

Dhaka may not be a high-profile tourist destination but every two years it plays host to one of the world's most innovative art events. The Dhaka Art Summit (DAS) is funded by Nadia and Rajeeb Samdani, who make their money from the food industry, finance, IT and aviation. The Samdanis are among the most world's most prolific collectors of contemporary art, but have never used the Summit as a showcase for their acquisitions. 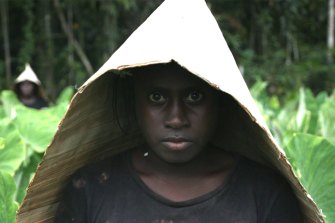 That grandiose display case will come along next year in the form of Srihatta, a new museum being built in the north-eastern city of Sylhet, where the couple were born and raised. The DAS is a very different proposition. Entirely non-commercial, it's not simply an exhibition but a talk-fest in which lectures, seminars and forums play a crucial role. It's a way of putting Bangladesh on the map, attracting artists, intellectuals and museum professionals who would otherwise never dream of visiting the country. Most importantly, it breaks down the walls of provincialism, allowing local artists to see themselves as part of an international art ecosystem.

The Samdanis don't just issue invitations. They are personally responsible for flying in hundreds of participants. Of the 500 artists involved in this year's events, there were 15 representatives of artists' collectives, from Asia to Australia, from Latin America to Africa, who were able to connect with each other and with local art collectives. The Australian invitees were Richard Bell (proppaNOW), and Abdul Abdullah (eleven). New Zealand was represented by the Mata Aho collective.

This kind of grass roots activity is almost unique to the DAS. The strategy owes much to chief curator, American-born Diana Campbell Betancourt, who has been in the driving seat since the first Summit in 2012. Betancourt has been fortunate in working with patrons who not only support her ideas, but get actively involved with all aspects of the event. 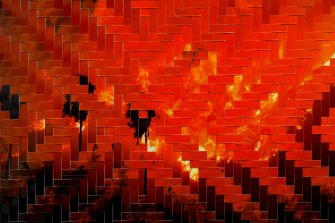 The theme for the fifth DAS was Seismic Movements, which was vague enough to cover every eventuality. Under this umbrella, the display was divided into separate exhibitions spread across four floors of the Shilpakala Academy. These components had titles such as Spatial Movements, Geological Movements, Independence Movements, Social Movements and Feminist Futures. Mixing contemporary and historical work, including a range of new commissions, the displays incorporated a lavish amount of documentation and archival material.

This tendency is also prominent in the Singapore Biennale (until March 22), but the idea of a "summit" seems to invite an emphasis on discourse and documentation. The downside is that it often feels as if artists were more concerned with education than aesthetics. In a previous era this was called "consciousness-raising".

Having found there are serious limits on how far my own consciousness can be raised, I was more taken with works that seek an aesthetic transformation of experience rather than an artful re-presentation. A little spectacle and a touch of poetry go a long way.

Australia's contribution to the show, organised through Artspace in Sydney, was large but deliberately empty. Taloi Havini, who was born in Bougainville but lives in Sydney, has created a spacious open frame structure on a packed earth floor. It functioned as a place where people might sit and take part in communal art activities – an ideal space for those who love to sit in the dirt embroidering with their pals.

Much of the most impressive work was introspective rather than declamatory. For instance, a series of abstract watercolours by Elena Damiani of Peru, which drew on the dust storms that are becoming an increasingly familiar feature of an overheated world. The theme may have been menacing, but the paintings were imbued with a subtle beauty. 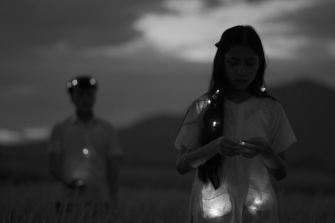 There was a powerful expressive dimension in the textured paper works of Adebunmi Gbadebo, which combined human hair, indigo, denim and fragments of text. Each element added to an historical narrative that began with slaves working in the plantations of Bengal that produced indigo, to modern-day Bangladeshi workers making garments for the export market. The raw, lumpen surfaces of each panel gave force to the content.

Of the video works, I was drawn to O Horizon, a film by the Otholith Group that took an oblique look at the legacy of famous Bengali poet, artist and educator, Rabindranath Tagore, but at 90 minutes it was rather too leisurely for comfort. The stand-out audiovisual piece – and for me, the masterpiece of the show – was Phan Thao Nguyen's Mute Grain (2019), a three channel work, based on a famine in Vietnam induced by the Japanese occupation during the Second World War. Shifting effortlessly back and forth through time, and different viewpoints, the film was filled with breathtaking images.

If Shezad Dawood's fabric hangings were great favourites, one suspects it was because of the artist's adventurous use of colour rather than the reputed allusions to Tagore and Alice Coltrane. A gigantic narrative painting by Nilima Sheikh allowed no opportunity of misinterpretation by including printed statements about the lives of women in the disputed state of Kashmir.

A unique feature of this year's DAS was an exhibition called Lighting the Fire of Freedom, a look at the life and times of Sheikh Mujibur Rahman (1920-75), the political leader revered as the father of Bangladesh. The display presented a potted history of the country's war of separation from Pakistan, which left the new nation in ruins. Sheikh Mujibur had ambitious plans for the recovery but would hold power for only two-and-a-half years before being murdered in a military coup. His daughter, Sheikh Hasina, has gone on to be Bangladesh's longest-serving Prime Minister. A socialist by conviction, Mujib, as he was known, might have been pleased to see Bangladesh's successful capitalists doing so much to support the local culture.