Even if you're not a country music fan you've probably heard of Troy Cassar-Daley. If you are a fan, you'll know the Queensland-based singer-songwriter is both phenomenally successful and arguably the nicest man in the business.

In Victoria late last year for the Queenscliff music festival, Cassar-Daley added in a last-minute gig – and then a quick stop for our brunch between the airport and Noojee, the Gippsland town of 157 where he played the final gig of his 2019 Greatest Hits tour. 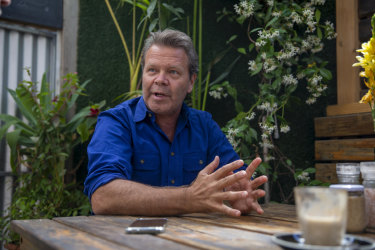 Adding a tiny show at the eleventh hour is typical Cassar-Daley; as comfortable playing to 100 people in a town hall as he is in front of thousands, he tries to respond to all his fan requests; he even has an "ask to play in your city" button on his website.

This is the man who, when he couldn't remember the lyrics to a song requested by a young fan, went back and relearned the song, rehearsed it, then recorded himself playing it on Facebook.

Above and beyond for most musicians of his stature, surely?

"It was good for the soul," Cassar-Daley says. "And good for me to remind myself of the song – makes up for the fact I'm getting old!"

Within 15 minutes of the post going up, the fan had seen it and was "beside himself".

"It was a really old song but his mum used to play it and she was watching it with him too," he says. "This was something good that can come out of social media."

Making time for brunch then, was nothing.

"Thank you for having me," he says as we settle in at Min Lokal in a Fitzroy backstreet.

"It's not often you get a stopover like this – and it's close to Brunswick Street where I used to love coming to eat," he says of the time he spent in Melbourne as a judge on TV talent show It Takes Two.

This morning he's having long black and the cafe's breakfast burger. I order the blackeye beans with eggs, roti bread and yoghurt. 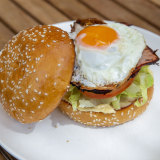 Cassar-Daley is a self-professed "road dog", accustomed to spending months at a time travelling, but 2019 was hardcore: he travelled extensively through every state and territory.

One imagines he knows his way around a roadhouse bain-marie.

"We have done plenty of roadhouses, for sure," he says, adding that he often does some research ahead of his tour dates to seek out decent food.

"You get to 50 and you understand there are places you want to go on your road trip. We hand-pick a few things". When we meet he's just back from Tasmania, where he discovered the state's famed curried scallop pies ("Incredible!").

On the Greatest Hits tour, a pared-back acoustic affair spanning songs from across his 10-album, 30-year career, Cassar-Daley had a new companion to compare food notes with – his 18-year-old daughter Jem.

"And we're still talking," he jokes. "I've loved it. And it's been such a great gap-year experience for Jem." 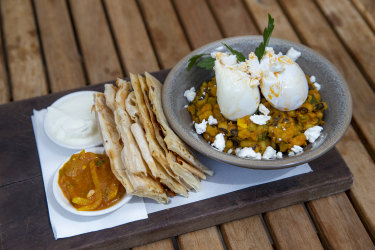 Travelling light – Cassar-Daley, Jem, manager Roxy and sound man Dan – the tour has criss-crossed the country, with more than 80 shows.

Jem, who plays keyboard and sings, opened the shows, and accompanied Cassar-Daley on a few tracks. "It's a wonderful experience to … watch your child ply their trade as a musician," he says. "And to see all the piano lessons paying off!"

He's also enjoyed showing Jem the country, particularly the more far-flung stops. Fiercely proud of his Bundjalung Aboriginal heritage (his mother is Aboriginal, his father Maltese-Australian), Cassar-Daley tries to play at Aboriginal communities when he can.

"On this tour we've covered a couple of interesting ones, really remote – one in Jabiru and then in Oenpelli, which we call Gunbalanya, about three-and-a-half hours north-east of Darwin." 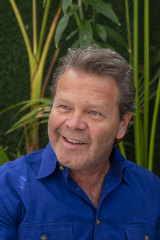 Cassar-Daley plays straight-up country, but is in demand as a collaborator outside the genre.Credit:Wayne Taylor

He talks about traversing the notorious Cahill's Crossing on the East Alligator River in the Northern Territory – one of the world's most dangerous – into Arnhem Land. "Once you get over the crossing though, it's just spectacular," he says. "I dream about that place."

Grafton-born Cassar-Daley's music has undeniable country roots (from busking on Tamworth streets as a teenager to 37 Golden Guitars, two APRA Country Song of the Year awards and innumerable country chart-toppers) but he's long been in demand as a songwriter beyond the genre. He's collaborated with Paul Kelly, Shane Howard, Don Walker (who also grew up in Grafton and knows much of Cassar-Daley's extended family) and Ian Moss.

Earlier this year Barnesy recorded one of his songs.

Effectively, he's almost an honorary member of Chisel – this month he's been  playing on the band's Blood Moon tour. "It's quite strange for me because I've loved them for a long time, so to write for them is a real privilege," he says.

But Cassar-Daley himself sticks largely to straight-up country; all these other musicians, he says, "bend towards me". "Which is lovely – Don loves country music, Paul Kelly loves country music… they've definitely got it in them."

After a couple of US gigs he's back in Australia for another year of touring, including first-time appearances at Bluesfest at Easter and next month's Riverboats in Echuca-Moama. 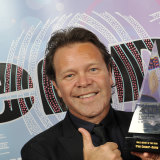 Cassar-Daley with his 2013 Deadly Award for Male Artist of the Year.Credit:Amanda James

"I've always loved the river there, the country it's on," he says, adding that he's tailoring his set specifically. "We do such different gigs, ute musters … and we change the content a lot. For Riverboats I'm taking a full band and it'll be a little bit more ethereal, with a bit more storytelling," he says. "I've got things I've never played much, some songs I've written with Don Walker – it's a bit more that environment where you have the time to tell a short story."

Storytelling is at the heart of Cassar-Daley's music, which is also imbued with his Indigenous culture.

His chronicles of the human condition in songs about rodeo riders, Holdens and working the land sit comfortably alongside quietly political songs such as Freedom Road, a tribute to the late Aboriginal politician and activist Charlie Perkins, and the moving Shadows on the Hill, about a 19th-century Aboriginal massacre near his home town. An eerie bluesy number, it recounts a story Cassar-Daley learnt only recently after a gathering with uncles and cousins on traditional Gumbaynggirr country. The song won Heritage Song of the Year at last year's Golden Guitars and featured in ABC's drama series Mystery Road.

Receipt for lunch at Min Lokal

(Rapper Briggs wants to record a rap version, but Cassar-Daley has lost the original tracks, "but hopefully we'll get around to doing something together one day!").

His straddling of what can seem two different parts of the culture is one of the unique aspects of Cassar-Daley's work. He's a regular at outback ute musters and attends a men's camp every year where "if you wanna cry, you can"; he raises funds for farmers, firefighters and Indigenous causes alike.

"It's bringing two opposite sides of the spectrum together," he says. "The farmers don't think 'oh, he's just a whingeing blackfella' … and the Aboriginal people don't go, ‘oh no, he's selling out'. We should all be proud of who we are and to get people to appreciate your music for what it is, whether it's got a message or not, is something I've been more proud of than anything in my career."

He recently played Shadows on the Hill in a small Tasmanian hall and says it was "one of the most astounding feelings I've had on the whole tour". "It was a lot of fellas that work on farms sitting there listening … all white guys, there were maybe three Indigenous people in the crowd," he says. "But they were happy to listen to this story – and applaud it. Because it's our history."

He's carrying Bruce Pascoe's Dark Emu when we meet ("I'm taking notes and absorbing it as slowly as I can") and he's eager to read Peter FitzSimons' new book, James Cook.

"I'm just as interested in that as I am in Bruce's take on how to grow natural grains," he says. "I think you have to be a well-rounded person in any walk of life, to be able to talk about it. If you only know half the story, you're not going to do any good for anyone."

He's hopeful that change is happening, albeit slowly, happening "There are a few good ripples out there – you get your cranky ones, like Briggs, you've got your more in-between solemn fellas like myself, who are all doing the job to bring people together," he says.

"It's a big mission but I want to help people learn about where we live, and what's gone on here. I'm not about bannering things, or being a grandstander, but I am for the truth." 6 Apr 21
WHITE PLAINS, N.Y. -- Supporters and family of the rapper DMX chanted his name and…
Lifestyle
0

20 Oct 20
Getting into the holiday spirit! The holiday season is going to look very different this…
Lifestyle
0 17 Sep 21
In the 2020s TikTok is *the* place that you discover great hacks and product recommendations,…
Lifestyle
0