There are still 16 aged care homes in Victoria that have not had a single coronavirus vaccine shot months after they were meant to be prioritised in the immunisation rollout, as the state battles a growing COVID-19 outbreak.

Federal Health Minister Greg Hunt acknowledged on Thursday that of Victoria’s 598 aged care homes, 16 of them had not had any doses delivered. Aged care resident and workers were meant to be vaccinated in phase 1a of the rollout, which began at the end of February. 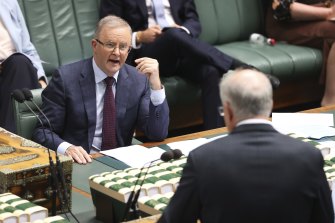 The federal government has responsibility for delivering vaccines to aged care homes, but the rollout fell behind almost immediately and comprehensively missed its original six-week deadline.

“That’s not good enough,” Mr Albanese said. “The Morrison government has to accept its responsibilities to lead rather than to always be looking to not take up what is its job to do.”

On Wednesday night, Mr Hunt had said 29 homes remained unvaccinated but in parliament on Thursday he updated these figures, saying only 16 now remained on the list.

Asked in question time about the failure to vaccinate all Victorian aged care homes, Prime Minister Scott Morrison said that more than 50 per cent of those over 70 in the state had now been vaccinated.

“That is important as we go into this challenge” of another Victorian lockdown, Mr Morrison said.

Mr Hunt said 97 per cent of aged care facilities around Australia had received at least their first vaccination.

“Within Victoria there are 598 facilities and 582 of those have received at least their first dose. Seven are to receive their first dose today and the remaining nine tomorrow.”

Federal Labor MP for the St Kilda area and surrounding suburbs, Josh Burns, asked Mr Morrison why the Jewish Care home in Windsor had not received a single vaccination.

“This is one of those facilities that the minister was referring to earlier. There is a small number of centres that remain to receive their first dose. The Jewish Care residential home in Windsor will be given their first dose tomorrow.”

“It’s infuriating that it’s almost June and aged care residents still haven’t had their first vaccine,” Mr Burns said. “It puts lives in danger. Instead of excuses, the Morrison government needs to outline when vaccines will be completed for Australians – especially aged care and disability care.”

Mr Burns then said he had spoken to the Jewish Care home’s chief executive who told him the COVID-19 vaccinations could not be delivered on Friday because residents had recently had a flu shot. Mr Hunt countered that the government’s health advice was that having a flu shot was not a barrier to receiving a COVID vaccination.

The aged care home has been contacted for comment.