In these COVID-heavy times, the announcement that the Cosmopolitan-swigging women of Sex and the City would return for a new spin-off series provided much-needed refreshment.

The stars of the taboo-breaking comedy-drama – which followed four wealthy thirtysomething female friends working, dating, and sleeping their way through New York – announced on social media that the show, titled And Just Like That…, will pick up the story as the characters navigate life in their mid-50s. 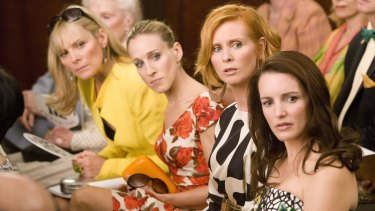 From left, Kim Cattrall as Samantha Jones, Sarah Jessica Parker as Carrie Bradshaw, Cynthia Nixon as Miranda Hobbes and Kristin Davis as Charlotte York-Goldenblatt in a scene from Sex and the City: the Movie.Credit:AP

Except one of the original quartet was missing. Kim Catrall, who played the self-obsessed, sex-loving PR Samantha Jones, will not be joining co-stars Sarah Jessica Parker (Carrie), Cynthia Nixon (Miranda), and Kristin Davis (Charlotte) when production begins in New York later this year. For fans, this is bitterly disappointing – but hardly surprising.

Over the past 15 years, Cattrall and Parker have been involved in a very public feud. Rumours of a rift over pay disparity – Parker was known to take home the heftiest paycheck – swirled around the show's final season. "I felt after six years it was time for all of us to participate in the financial windfall," Cattrall told Jonathan Ross. "When they didn't seem keen on that, I thought it was time to move on."

The stars patched things up successfully enough to make two film follow-ups in the late Noughties, but only temporarily. When Cattrall's decision to walk away appeared to derail plans for a third instalment at the last minute in 2017, the ceasefire was well and truly over. 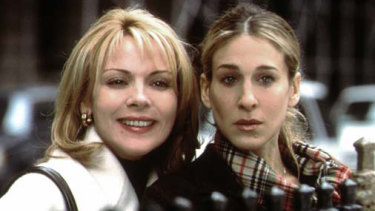 A public feud between Cattrall and Parker has cast a sad tinge over the beloved show. Credit:

But the inevitability of Samantha's absence from the reboot doesn't make it any less devastating. From her maiden speech in the show's first episode, when she declared "Sweetheart, this is the first time in the history of Manhattan that women have had as much money and power as men, plus the equal luxury of treating men like sex objects", to her revolutionary relinquishment of love in favour of self-fulfillment at the end of the first film, Cattrall's character has always been the funniest, most feminist and, of course, the sexiest thing about Sex and the City.

Most importantly, Samantha was the ultimate champion of female friendship. More than a decade before Lena Dunham's Girls made loving but dysfunctional female friendships aspirational, Sex and the City was a mainstream TV show about the nature of the bond between the four women – and provided the dramatic and emotional heart of every episode. Despite Samantha's self-interest, she was none the less the most loyal and least judgmental of the friends.

In losing her, the spin-off risks diluting the show's most radical question: can you convince an audience that a woman can be happy without a man? In the early seasons, the chain-smoking, domesticity-allergic protagonist Carrie seems to be heading towards the bolder answer. But by the end and in the films that followed, her storyline was tied up in a romcom-friendly bow, as she settled down with her on-off lover Mr Big (played by Chris Noth). To many fans, this felt like a betrayal, and not just because Big was horrible. The answer to the show's question seemed to be no.

But not for Samantha. At the end of Sex and the City: the Movie she dumped her long-term boyfriend simply because she did not want a relationship.

The fact that Carrie, Charlotte and Miranda are happily shacked up with men does not bode well for the new spin-off.

I'm struggling to imagine ways Samantha could be written out that are not either actively depressing (a fatal recurrence of breast cancer?) or unsubtly reminiscent of real headlines (she tells Carrie to get lost, moves to Canada, and starts a torrid affair with someone called Trudeau).

But whatever happens, without filthy, fabulous Samantha it's difficult to see how the new series will retain its bold feminism.