The nation’s top cyber spy has suggested it would be unwise to permanently expand the Five Eyes intelligence alliance to include other nations, saying its 80-year history means a lot of thought must go into any significant changes. 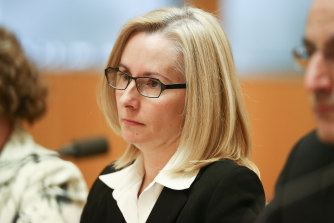 Rachel Noble, director-general of the Australian Signals Directorate, suggested the Five Eyes network should not be suddenly changed.Credit:Alex Ellinghausen

She said the Five Eyes alliance could instead collaborate with other democracies on a needs-basis, saying “we’ll partner with other countries when it is in our mutual interests to do so”.

Japan has said it would like to join the Anglosphere spying network, saying all six countries share “universal values and strategic interests” in the face of a rising China.

Australia and New Zealand joined the US, Britain and Canada to complete the Five Eyes group in 1956, which was the last time any new member was admitted. The Five Eyes was earlier this year a source of tension between Australia and its trans-Tasman neighbour after New Zealand Foreign Minister Nanaia Mahuta said her country would resist efforts to expand the role of Five Eyes in responding publicly to China.

After delivering a speech on Thursday at the National Press Club in Canberra in which she spoke about the growing importance of the ASD’s offensive cyber capabilities, Ms Noble was asked whether the intelligence-sharing network should be expanded.

“It’s a funny kind of phrasing of the question because the Five Eyes is the Five Eyes … we got together after the Second World War and even before that,” she said.

“So when you think about an alliance and a set of relationships, capability and integration that goes back nearly 80 years, it’s sort of a framing issue to go: ‘Oh, can someone just sort of join it today?’

“I think though in the strategic environment that we’re facing … the importance of democratic countries staying together and sharing information, intelligence, capabilities and any insights for those who might seek to disrupt that freedom of will and movement, democracy and our values – then we do have to stand together. And we do already have very good relationships beyond those Five Eyes partnerships to that end.”

“I am very much optimistic … we would like to see this idea become reality in the near future,” he said.

Ms Noble also said she “worried” the world was already seeing a splintering of the internet, with authoritarian countries deciding what their people were allowed to view.

“There’s a lot of countries in the world who already do a great deal of management, curation, of what their people can see through the internet,” she said.

In her speech, Ms Noble said the ASD’s ability to engage in offensive cyber attacks was now a “mature” capability that could “greatly shorten” a ­future conflict.

“Our signals intelligence function gives us an enormous edge over our adversaries. It brings with it the benefits of a Five Eyes alliance,” she said. 2 Oct 21
Love Love Island? Our Factor 50 email brings all the goss direct to your inbox…
Lifestyle
0