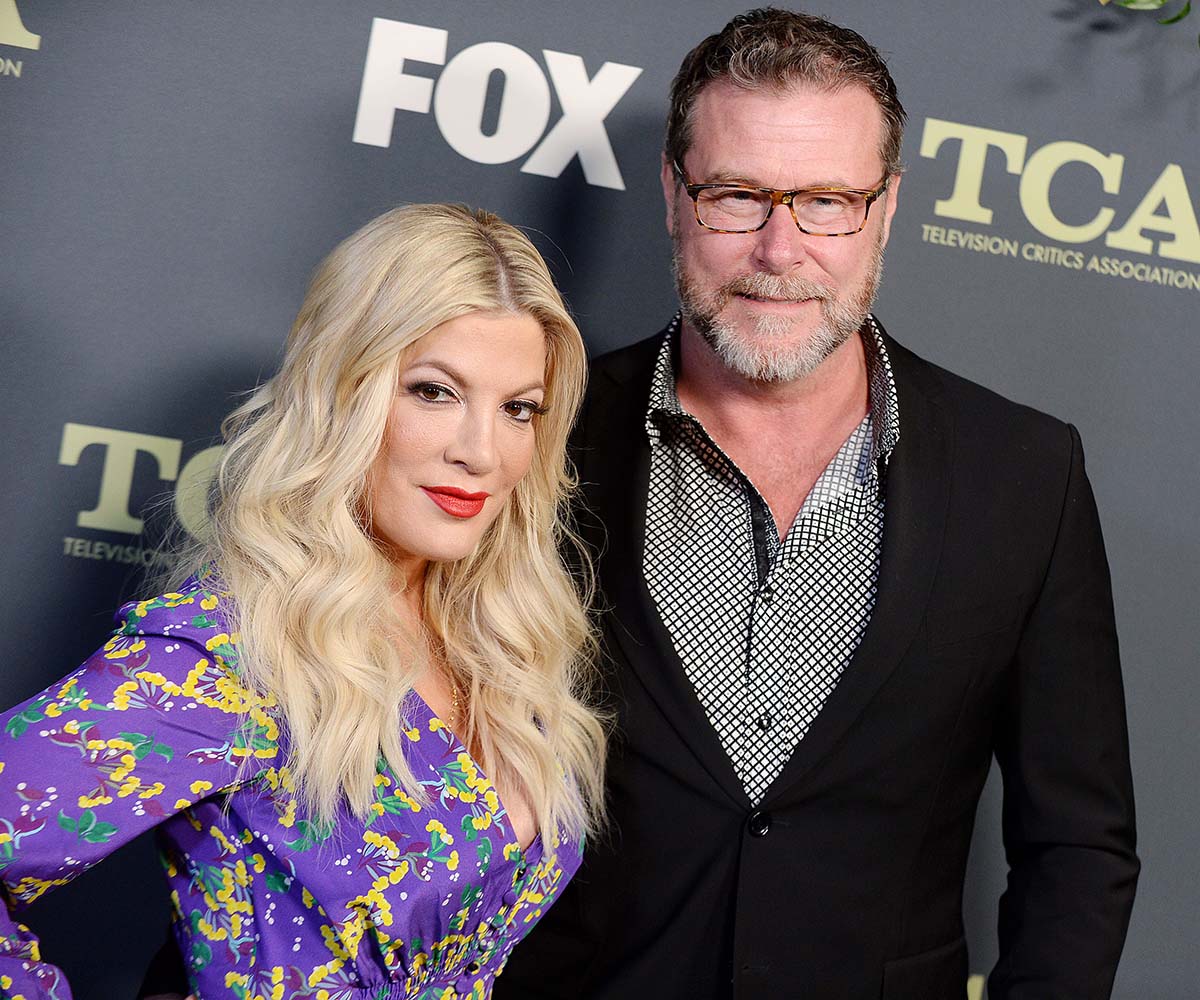 Timing is everything. Tori Spelling gave fans an update on her and Dean McDermott’s relationship after he was noticeably absent from their family’s holiday card.

“Dean must be ‘working’ out of town and couldn’t get home in time for the annual Christmas picture,” one fan commented on Spelling’s Simply to Impress sponsored post on Monday, November 22, alongside a winking emoji and an eye-roll emoji, hinting that there must been more to the story.

The 48-year-old actress raised eyebrows on Monday after she shared her holiday card via Instagram without 55-year-old McDermott in the shot. Spelling posed alongside the pair’s five children — Liam, 14, Stella, 13, Hattie, 9, Finn, 8, and Beau, 4 — and their two goats, pig and chicken. 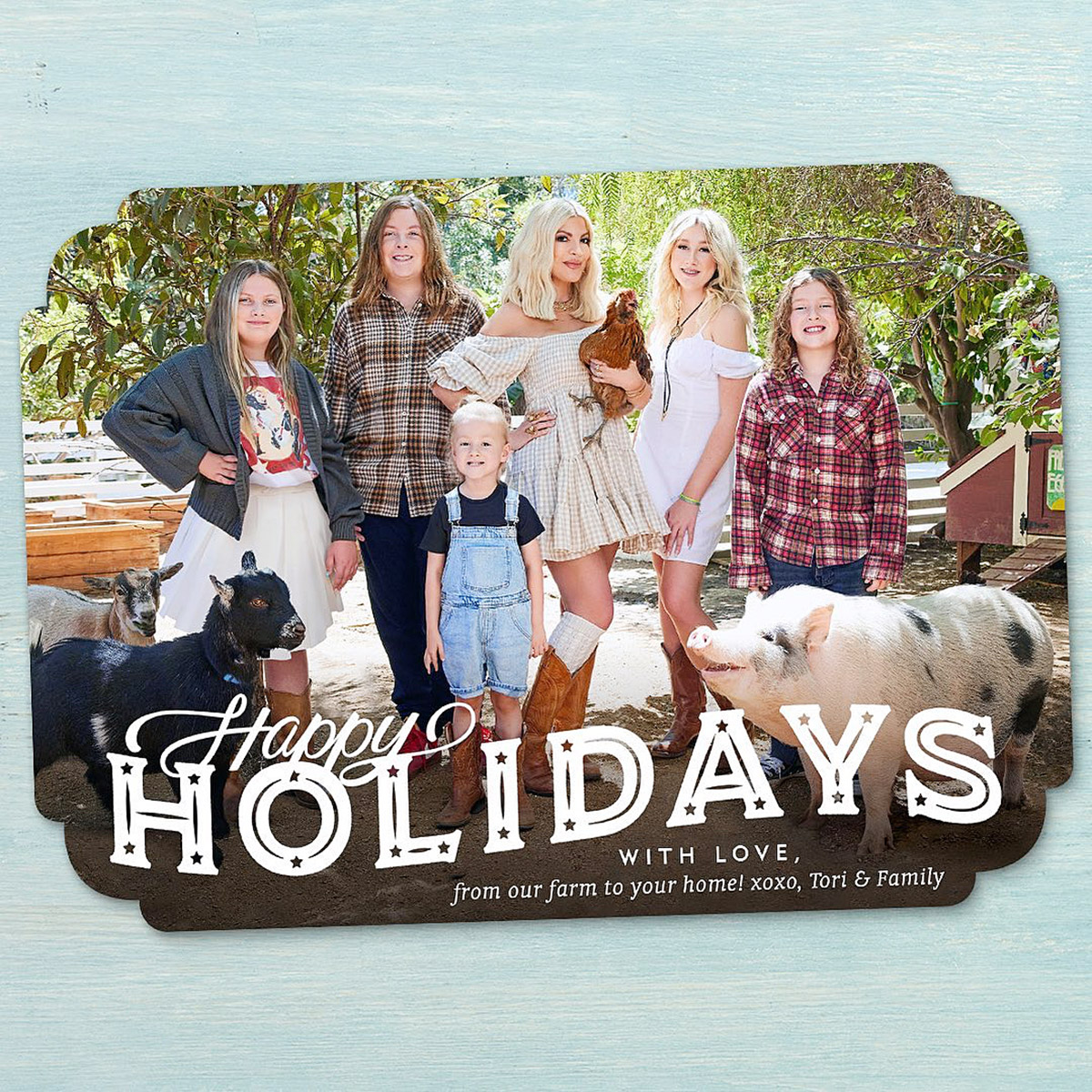 The sTORI Telling author fueled split speculation with the post as eagle-eyed fans noticed that McDermott didn’t even get a shout-out in the text on the card.

“With Love, from our farm to your home! Xoxo, Tori & Family,” the card’s inscription read as the group smiled from their outdoor oasis.

Spelling captioned the snap, “It’s that time again. And it’s a winter wonderland at my house,” before thanking the printing company for its help “once again bringing our happy family to life on my favorite holiday card yet.”

The BH90120 alum concluded: “This is a card our friends and family will ❤️ opening and putting on display! #familyiseverything.”

While some fans questioned where the Slasher actor was in the group photo, other fans praised Spelling for her sweet snap.

“You look so much more healthier and happier Tori????❤️❤️❤️,” one user commented, while a second one wrote, “Beautiful family and mama ❤️.”

Spelling’s photo choice is the latest in a series of head-turning actions from the California native and her husband, who initially sparked divorce speculations earlier this summer.

After the Unchartered TerriTORI author and the Canada native were both spotted without their wedding rings, Spelling revealed in June that she and McDermott were not sleeping in the same bedroom. She explained at the time that it was a result of her kids sleeping with her while the Open Range actor was away shooting a project overseas.

McDermott cleared the air in September, telling listeners of the “Feminine Warrior” podcast that Spelling forgot to put her ring back on after washing her hands when she was seen without it on.

He noted that he lost his own wedding band while playing golf. “I lost my utility ring and then somebody saw that [and said], ‘He doesn’t have his ring,’” McDermott said at the time. “So, now, everybody’s in a titter, so I’m like, ‘Forget it, I’m not going to replace it. Just let them think it.’”

However, Spelling caused a stir the following month when she was spotted outside an attorney’s office carrying documents that read “assets,” “support” and “custody,” causing some fans to think they were headed for a permanent split.

A source exclusively told Us Weekly in October that Spelling “wants a divorce” following a serious disagreement between the pair after McDermott “went missing” for two days. The insider noted that Spelling “feels trapped” in her marriage and has therefore not left.

A second source told Us earlier this month that the twosome “can’t stand to be around each other” after getting married in 2006. “It’s gotten really bad and those close to them feel it won’t last much longer,” the insider said in November.