It is not just Australians who have a weather eye on the threat of a return to the La Nina conditions that contributed to extreme weather that has racked parts of the nation over the past three years.

On Tuesday, the Bureau of Meteorology announced although the 2021-22 La Nina event had ended, according to its modelling there was a strong chance it may re-emerge in spring. 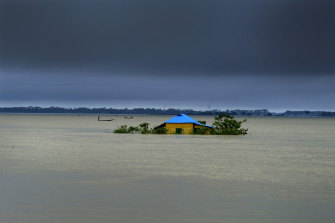 A house is marooned by flood waters in Sylhet, Bangladesh last month.Credit:AP

Weatherzone Meteorologist Ben Domensino said it was not yet clear what impact this might have over summer.

“It’s hard to tell at this stage if La Nina does redevelop whether or not it will persist through next summer. What we can say at the moment is that if it does we’re more likely to see your wetter than average spring over eastern and northern Australia.”

Over the past two years La Nina has not only contributed to widespread destruction in Australia and drought in the United States, but is thought to have exacerbated catastrophic flooding in Bangladesh, India and China. According to UNICEF four million people have been stranded by flash floods in north-eastern Bangladesh alone.

Research professor at Columbia Climate School’s Lamont-Doherty Earth Observatory Mingfang Ting said though heavy rains were to be expected during monsoon season, La Nina appeared to be exacerbating the rains.

“La Nina is definitely one culprit here. During La Nina, the ocean is warmer in the western tropical Pacific, or the warm pool region, allowing more abundant warm, moist air to be transported toward southern China when the weather system is aligned. Another potential contributor is the Indian Ocean Dipole, which is in a slightly negative phase at the moment, which also makes the western tropical Pacific warmer than normal.

“The same concept applies to Bangladesh and north-eastern India where flooding is also happening this year,” she told the school’s State of the Planet journal.

Kai Kornhuber, an extreme weather research scientist at the same school, told State of the Planet the extreme weather was in keeping with what is known about climate change – that warmer air held more moisture.

“The current flood events are another sad example of a series of record-breaking precipitation extremes such as the floods in Central Europe and the Hunan floods of the past year,” he said.

Scientists told the journal Nature that though a triple La Nina was a rare event, it was likely to become more common in a warming world.

“The tropical Pacific is huge. If you shift its rainfall, it has a ripple effect on the rest of the world,” said Michelle L’Heureux, a physical scientist at the National Oceanic and Atmospheric Administration (NOAA) Climate Prediction Centre told the journal.

A guide to the environment, what’s happening to it, what’s being done about it and what it means for the future. Sign up to our fortnightly Environment newsletter here.

30 Mar 20
SPOILER ALERT: Do not read if you have not yet watched “Zoey’s Extraordinary Glitch,” the eighth…
Lifestyle
0

29 Jan 20
At the conclusion of Selena Gomez’s new album, “Rare,” Spotify autoplayed a song from her…
Lifestyle
0