A rapid recovery from the pandemic will help create 1 million jobs over the next four years in a new forecast from Treasurer Josh Frydenberg that will shape an election contest with Labor on economic growth and the pressure on wages.

The jobs surge is central to a federal budget update that will confirm a stronger outlook for the nation’s finances on the assumption that households will not return to the sweeping lockdowns seen this year. 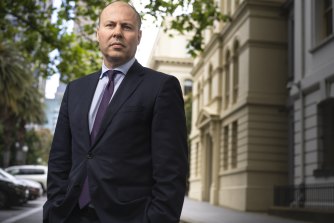 Treasurer Josh Frydenberg will on Thursday announce that a rapid recovery from the pandemic will help create one million jobs over the next four years.Credit:Eamon Gallagher

The budget update on Thursday will forecast a fall in unemployment to 4.5 per cent next year and 4.25 per cent in the following year, a big improvement on earlier estimates and a key factor in predictions for stronger wages for millions of workers.

While Labor treasury spokesman Jim Chalmers has warned of stagnating real wages, the new Treasury forecasts will upgrade wage growth for every year of the next four years.

Mr Frydenberg will argue this should mean a worker on average full-time earnings sees an increase in annual earnings worth $2,500 each year over the next four years.

Deloitte Access Economics director Chris Richardson said the new government forecasts would reflect a resurgence in the labour market during November, when consumer spending grew after the winter lockdowns.

“The job numbers are truly stunning, partly because people want to get out and spend and dollars create jobs,” he said.

“The November jobs result should be a rip-snorter – more than 200,000 jobs. So it will be a good news day. And that shows through in the tax take.”

The mid-year fiscal and economic outlook, or MYEFO, will show an increase in tax revenue that will help reduce the deficits over the next four years, but major new policies will be kept for the federal budget scheduled for March 29.

While next year’s economic statement could be brought forward if Prime Minister Scott Morrison chooses to go to an early election in March, many in the government want to wait for a formal budget and a May election.

Treasury predicted the creation of 850,000 jobs over four years in the budget released in May but has upgraded that to 1 million jobs in the MYEFO to be released on Thursday, estimating a labour force of 13.8 million people by June 2025.

Mr Chalmers blamed the federal government for failing to deliver enough vaccines earlier in the year and therefore being responsible for the contraction in the economy when states imposed lockdowns.

“One of the reasons we had such a deep and damaging downturn this year was because of the mistakes that Scott Morrison and Josh Frydenberg made when it came to vaccines, and quarantine, and economic support,” he said.

“If this mid-year update doesn’t recognise that Australian working families are being left behind because of skyrocketing prices, and declining real wages, and money being sprayed around in marginal seats, then it won’t be worth Australians paying attention to it.”

With both major parties expecting a fight on the cost of living at the election, Mr Frydenberg pointed to the MYEFO upgrade to predict better conditions for workers including higher wages.

He named income tax cuts, the JobKeeper wage subsidy, the cashflow boost for business and the COVID disaster payment for workers as some of the programs that had contributed to the economic recovery.

Finance Minister Simon Birmingham said the labour market was recovering and this would continue.

“As our economy gets roaring again and Australia continues to open up, we should be optimistic about our labour market outlook,” he said. 20 Sep 21
Princess Beatrice, the daughter of Prince Andrew and Sarah Ferguson, has given birth to her…
Lifestyle
0