House prices may be falling as interest rates rise, but the median across Australia’s capital cities has so far only edged back to $1,022,194.

That figure is a hefty cost for many potential buyers and has fallen only 4 per cent in the three months to September, Domain figures show, holding 2.3 per cent higher than a year earlier. 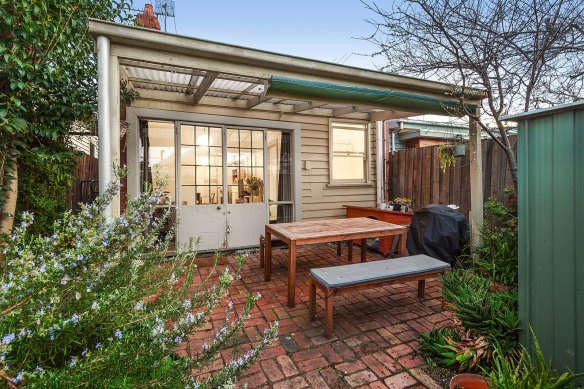 What will a million-dollar budget buy? For that money, home buyers can choose between a luxury apartment, a cute-as-a-button workers’ cottage, or a family home, depending on location.

In Sydney, the most expensive capital, those that have $1 million or so might look to a one-bedroom workers’ cottage in inner-city Erskineville.

The property at 22 Flora Street has been updated, though it still has some original features, and has been listed with a guide of $950,000.

“It’s predominantly first home buyers, but buyers upsizing out of a smaller apartment or something like that who are also looking,” Gillespie said.

He said the market was still competitive, though it had slowed since peaking in March this year.

“Fewer properties are for sale and that’s dwindled even further since spring started,” Gillespie said. “Buyers have a mindset now that they’re not in a rush because the market hasn’t made them rush.”

Another one-bedroom terrace in the same suburb, at 44 Swanson Street, sold for $1.06 million in June, just above the median price.

Buyers looking for a family home at a similar price would likely cast their net further afield.

Recent sales at that price point include a three-bedroom house on 450 square metres in Glenmore Park.

In Melbourne, buyers could expect their budget to stretch a little further.

The home, with a colourful interior, is in one of the city’s most popular inner suburbs, especially for young buyers looking for a family home.

“A mixture of first home buyers and people who may have had a smaller apartment or entry-level townhouse are looking to get in,” selling agent Nelson Alexander Northcote’s Alex Rodighiero said.

In the same suburb, a two-bedroom Edwardian sold this month for $1 million, and was listed with the option to renovate and extend.

Further from the CBD, a three-bedroom house on a 610-square-metre block in Aspendale Gardens sold this month for $1,017,000.

The home at 20 Denahy Court has an updated kitchen and was offered as move-in ready with scope to upgrade further.

In Brisbane, buyers with a $1 million budget might consider a small but luxurious apartment overlooking the river and the Story Bridge.

The two-bedroom apartment at 408/9 Christie Street South Brisbane is advertised for offers over $950,000, and the building also includes an infinity pool and gym.

Place Estate Agents’ Michael Hatzifotis said interstate buyers from Sydney and Melbourne have been looking to downsize in inner-city Brisbane.

“Downsizers are selling their homes in their own suburbs like inner Melbourne and Sydney and then relocating for work,” Hatzifotis said.

Elsewhere, a three-bedroom cottage in Chelmer sold for $1.01 million this month.

The home at 205 Honour Avenue came with two bathrooms and a study.

In Perth, buyers might look at a circa 1920s home that has been updated in Mount Lawley.

The two-bedroom home at 163a Walcott Street is in an inner northern pocket of Perth, and has been advertised for offers over $949,000.

Meanwhile, in Hobart, buyers can find a historic, Federation-style terraced townhouse, for offers over $1 million.

The home at 185 Davey Street, South Hobart has hints of the past, featuring an open fireplace, picture rails and stained-glass. It also has a study.

The circa 1915 home has been fully renovated, and has been advertised as a home with a “strong rentability factor” for investors. 18 Jan 22
'He has to go to the naughty centre': Sassy five-year-old explains why Boris Johnson is…
Lifestyle
0