Elena Kats-Chernin and Justin Fleming’s opera, Whiteley, mixes biography and epiphany to create a study of creation and destruction, of grand vision and sometimes sordid circumstance. The bio-pic narrative, charting artist Brett Whiteley’s life through childhood, love, success and death, punctuated by peak moments of self-realisation, is unusual for opera, which tends to prefer essence over information. 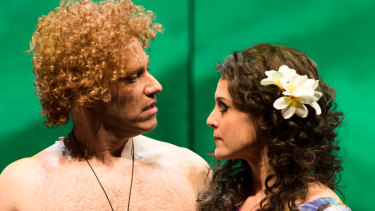 The work sustains interest, however, through Kats-Chernin’s finely-crafted score of variegated mood, texture, tone and style, fine performances, and the themes of Fleming’s libretto which, at key points, take one to the edge of what it is to be human, to create and to cease to be.

In a drama of more traditional operatic shape some of the life events – the parties, drug-busts and OBE – would have been shed and the relationships would be triangulated against essential conflicts and archetypes. But in the age of television we tell stories differently. This was an opera not only about genius but also about the troubled birth of something new in Australian artistic consciousness, in which it became relaxed in its sensuality, transfigured by its beauty and deeply troubled by inner contradictions. In this production all of these are gloriously manifest in Whiteley’s images, whose projections dominate David Freeman’s direction, Dan Potra’s design, Sean Nieuwenhuis’s video and John Rayment’s lighting.

With tousled hair and a shambling mix of insouciant brilliance and existential anxiety, tenor Leigh Melrose sang and portrayed the precocious, sometimes unlovable Whiteley with a vocal range from wiry ferocity to ethereal dreaminess, spanning swaggering moments of elan and despair.

As muse and wife, Wendy, Julie Lea Goodwin embodied beauty and grace of voice and persona, creating gentle radiance of tone and a character of liveliness, bristling energy and quiet mystery.

Kate Amos was frank and subtly defiant as daughter Arkie, unprotected from her father’s excesses, singing with fine edge and unexpected strength.

As the younger Arkie Natasha Green sang with simple undefiled purity. Singing his mother Beryl, Dominica Matthews handsomely completed the trio of reluctant goddesses and witnesses to Whiteley’s demonic addictions which lured him again and again to the abyss, an addiction as much to the intense creative presence he attributed, perhaps wrongly, to narcotic cognitive deformities as to the substance itself. 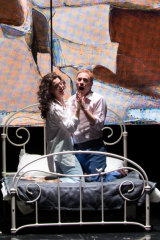 The opera canvases Whiteley’s life through the parties, the drug-busts and the OBE.Credit:Janie Barrett

This was an opera about Sydney and its people, one of whom, Wendy Whiteley, waved quietly during the standing ovation, having just watched the opera of her life.

17 Nov 20
Kay McConaughey and Jada's mom realize they had something in common on Red Table Talk.…
Lifestyle
0