A window cleaner looks so similar to Simon Cowell that even celebrities are stunned by his likeness – including the man himself.

Andy Penfold, 54, from East Sussex, was backstage at a gig five years ago, wearing a new pair of sunglasses, when people mistook him for the judge.

Since then he’s signed up to a lookalike agency and attended events dressed as Simon Cowell.

Celebrities are amazed when they meet him too – with Peter Andre and even Piers Morgan astonished at his likeness. While he even had the chance to meet the man he looks so much like – visiting the set of Britain’s Got Talent.

He constantly has strangers approach him for pictures, while some clients have even cheekily asked him to clean their windows dressed as Simon Cowell. 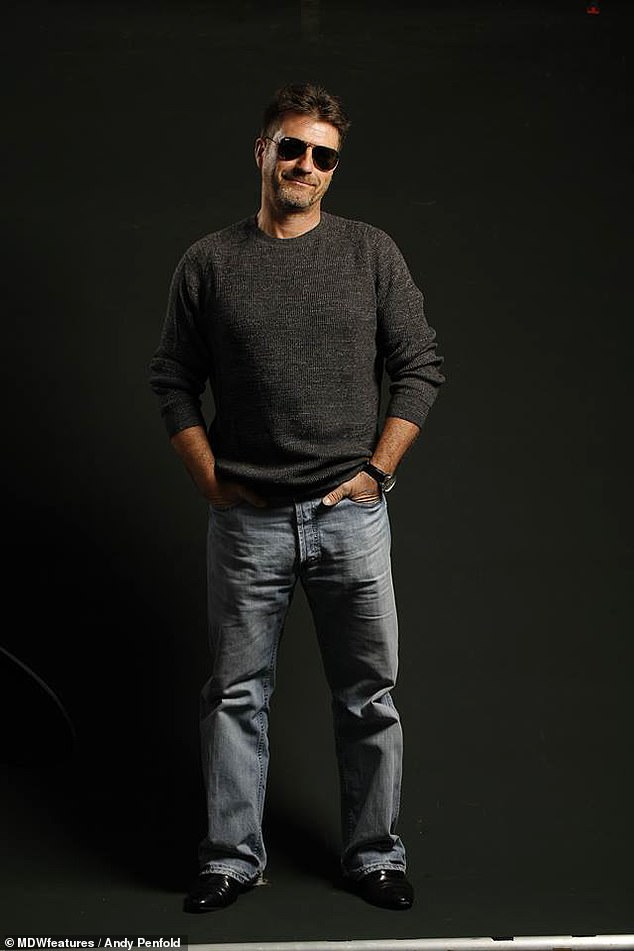 Andy Penfold, 54, from East Sussex, UK, was backstage at a gig five years ago wearing a new pair if sunglasses when people mistook him for the judge 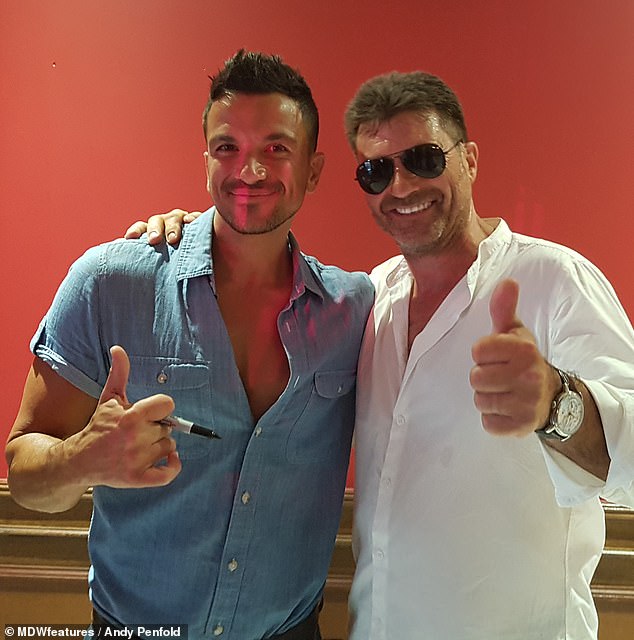 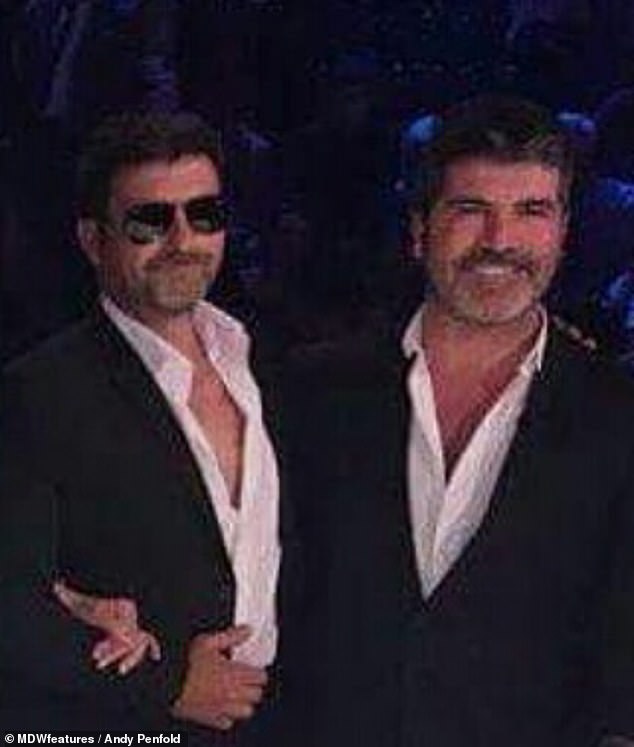 In the summer of 2014, Andy had backstage tickets at the Isle of Wight festival to watch the band Republica perform, as he is friends with the lead singer.

He forgot his glasses and ended up buying a new pair of Ray-Ban sunglasses for the event. When he put them on, he was suddenly ambushed by people there who noticed the resemblance between him and Simon Cowell.

He was then encouraged to send in a picture to a lookalike agency, who signed him, and he has since been attending numerous charity events dressed as Simon Cowell.

On the same year, he was offered a job to feature in a music video with the band Rouge Kiss who were contestants on the X Factor. He was then invited to the set of Britain’s Got More Talent (BGMT) where he met Simon, Amanda Holden, David Walliams and Alesha Dixon, who were all shocked by their resemblance. 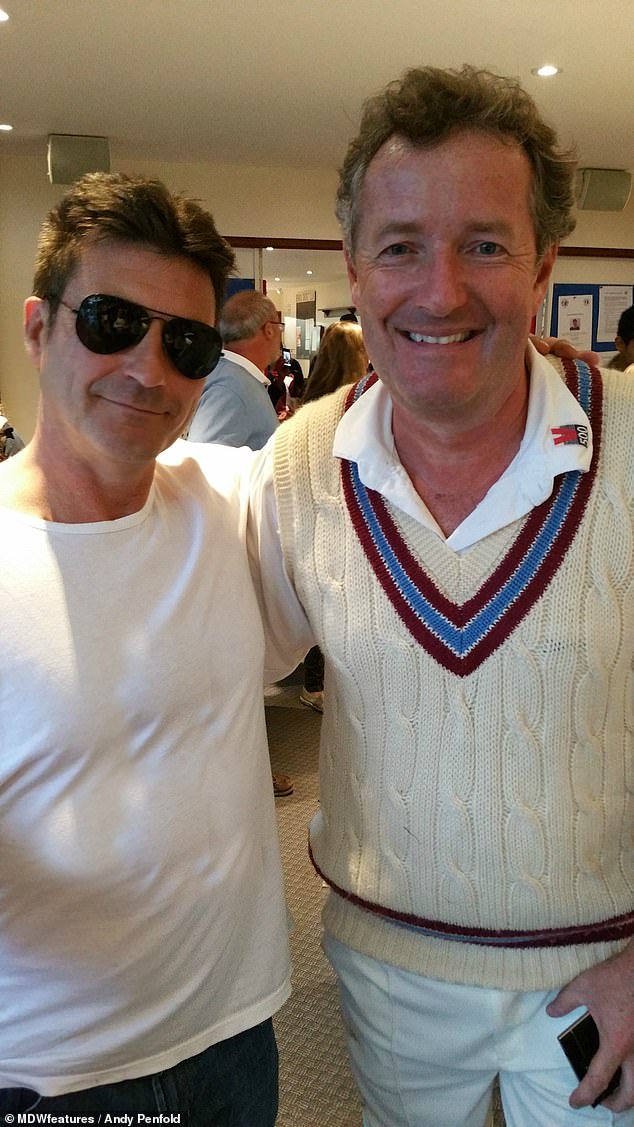 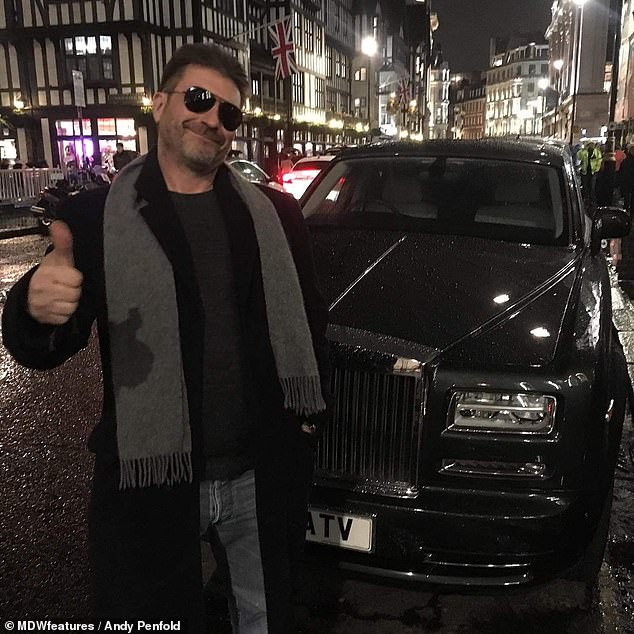 Explaining the first time people noticed his likeness he said: ‘A friend of ours, Saffron, is the lead singer of Republica, and they were playing the Isle of Wight festival, she very kindly invited us as backstage guests.

‘On the day of the concert I forgot my glasses, so I purchased a pair of Ray-Ban sunglasses. All of a sudden, people were around me telling me I looked like Simon Cowell – I guess being in the VIP area helped.

Talking about his new doppelganger role he said: ‘I worked with various brands through the agency such as Thornton’s Chocolate, Intu Shopping Centre, Kerry Foods, Yara UK. 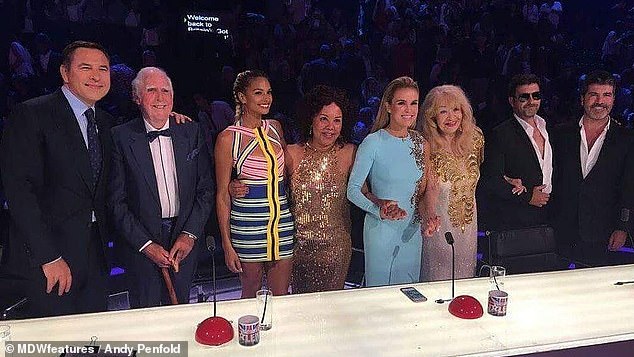 He was then invited to the set of Britain’s Got More Talent (BGMT) where he met Simon, Amanda Holden, David Walliams and Alesha Dixon, who were all shocked by their resemblance. 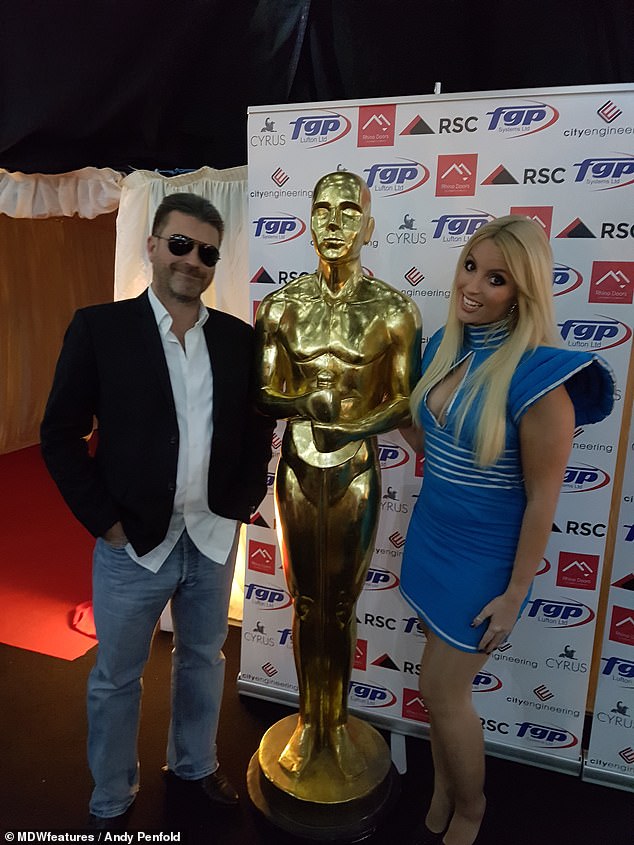 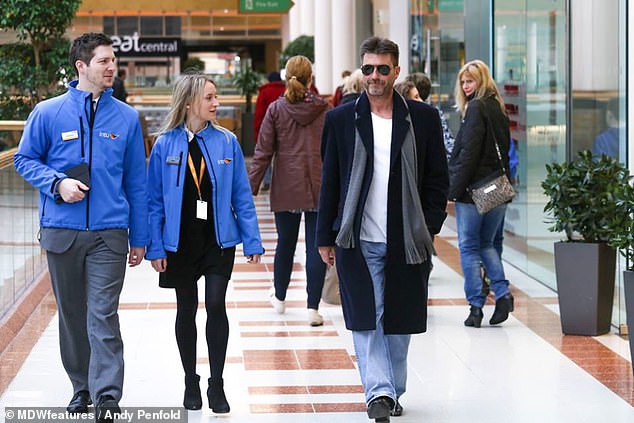 Many people take second glances when Andy, who is dressed as the star, walks past them

‘I worked for Talk Talk and the X Factor Final –  I was there for the whole weekend with their corporate clients at Wembley Stadium, then went in for the final.

Talking about one funny job, he said: ‘Early on, myself and four of the guys from the Rugby Club travelled to Wolverhampton, to do a version of the Full Monty for 250 ladies on a hen night. It raised just over £2,500 for Cancer Research.

‘Also, when I was in Hollywood, we found Simon’s house and I stood outside for a picture. A tour bus drove past and you could hear the narrator say, “Geeze, Simon’s outside”. 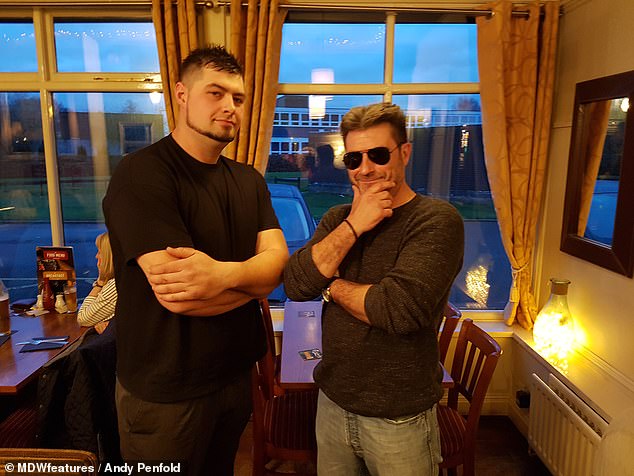 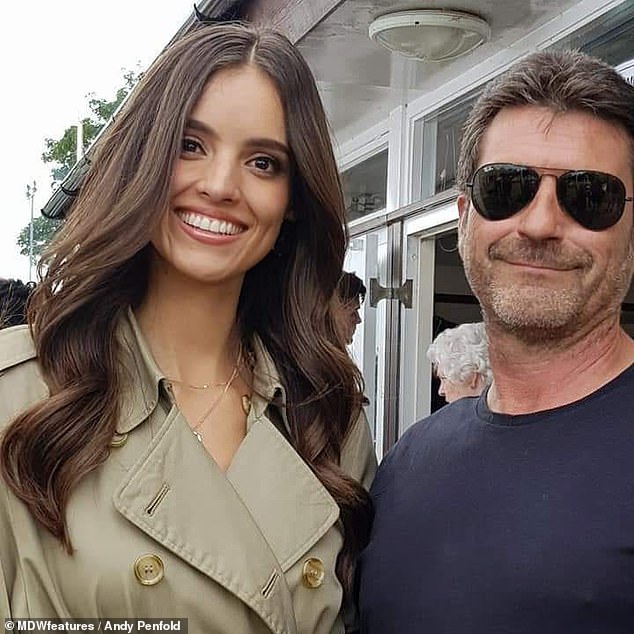 ‘At that point people at the back of the bus went mad with flashing cameras which was so funny. It makes you wonder how far around the world pictures travel.’

Andy admits that it has been a rollercoaster and he has been able to help raise money for charity due to his resemblance to Simon.

At first, he never tried to emulate Simon’s style, but when he discovered how similar they looked, he made more of an effort to keep up with his outfits. 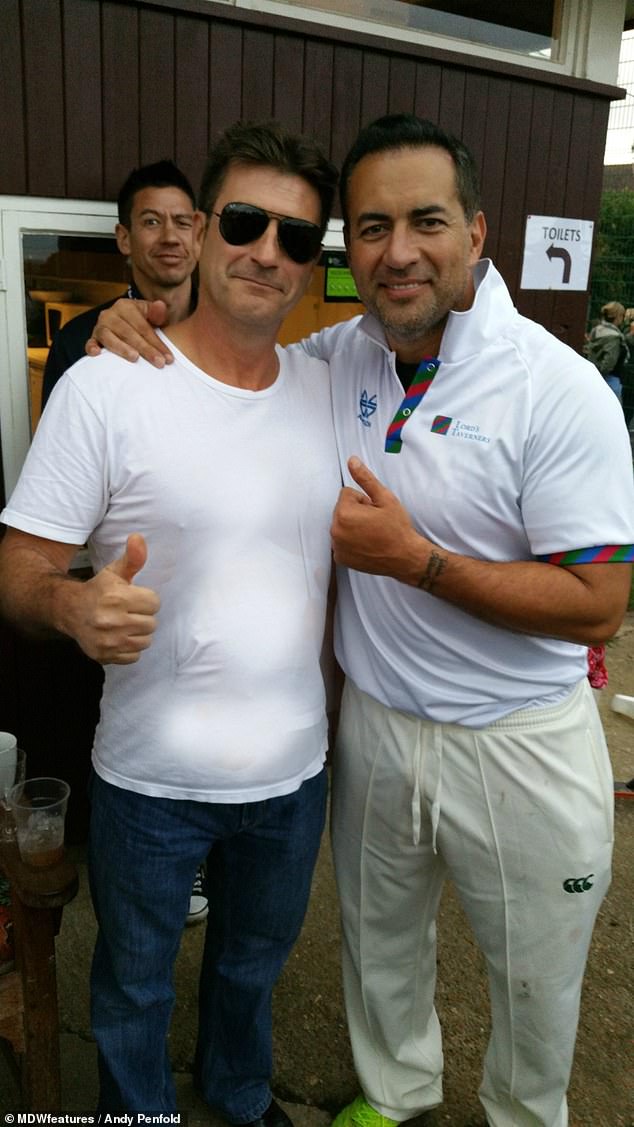 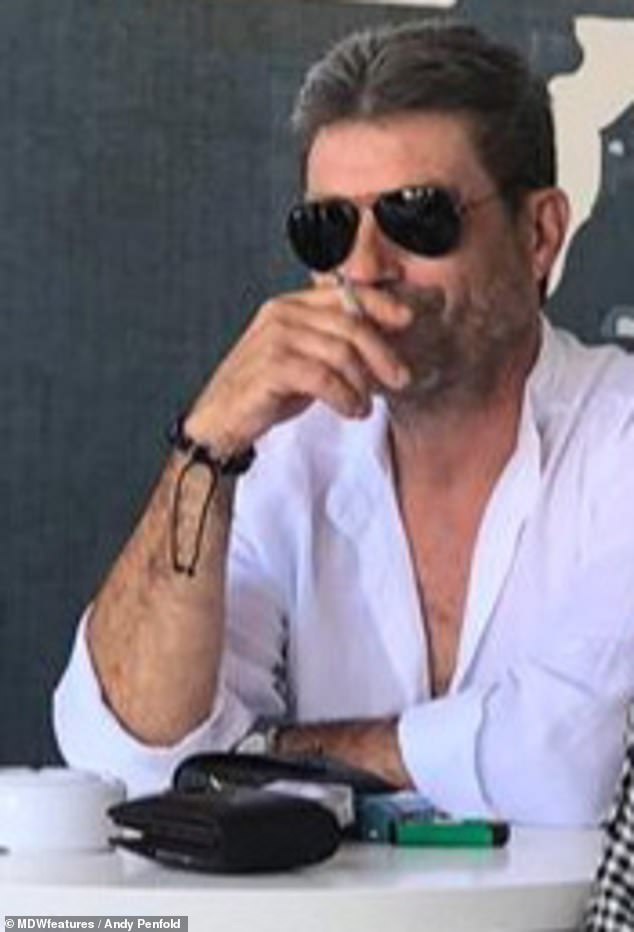 Andy has got Simon’s look down to a fine art – complete with sunglasses, stubble and the open shirt 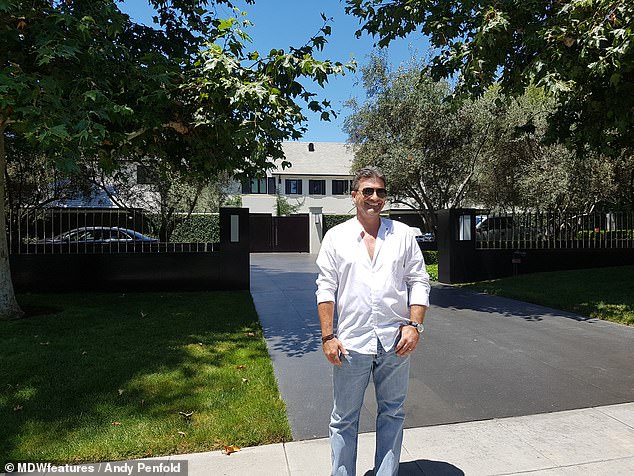 Andy says that one woman actually shouted ‘Simon’s’ name at him and was shaking like a leaf when she met him. Andy pictured outside Simon’s LA home

‘When I am out on, let’s say, official bookings, I slightly adjust my hair – the canvas is there, I am just enhancing it,’ he said.

‘Fortunately, the way Simon dresses are quite easy to follow, I do have jeans slightly altered for looks, and once I had a suit made in Thailand based on his which I wore on BGT.

‘I think he’s an absolute gent, he does a lot for so many people that goes unnoticed, he’s genuine person. I think his reaction says it all on the show, amazing, he was an absolute gent too. I met him twice since. 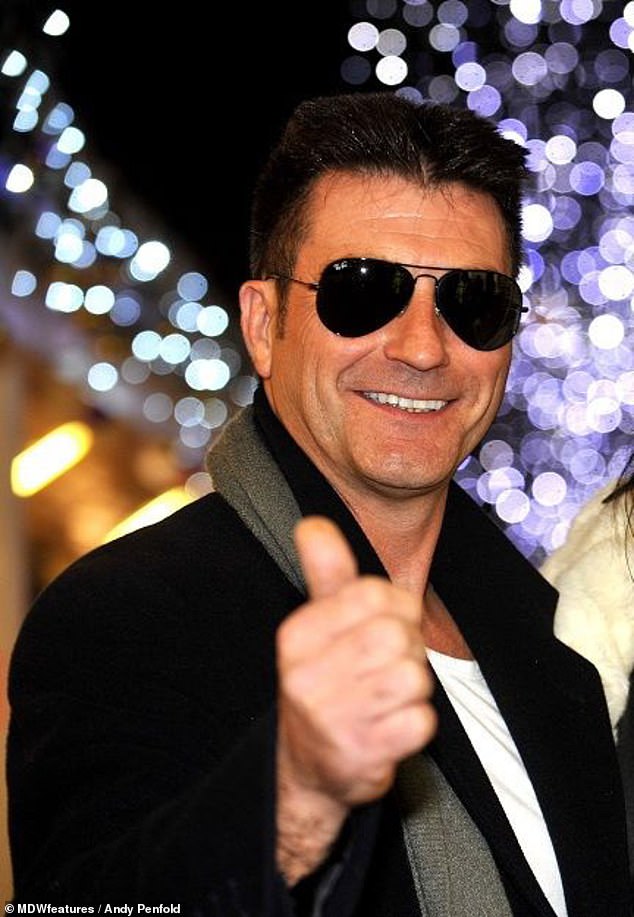 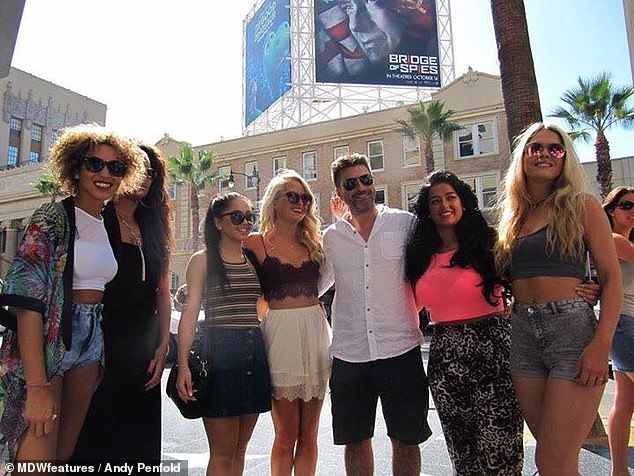 ‘I guess as I’m older, the comparison doesn’t bother me, you still get the odd “why would you want to look like him,” but you just let it go over you.

‘As long as I’m putting a smile on people’s faces, that’s what matters.’

While he find the attention from fans funny: ‘A lady actually stopped her car in the middle of the road, shouting out ‘Simon’ and she came towards me wanting a photo. Bless her she was shaking like a leaf.

‘She only realised at the last minute I wasn’t him, but wanted a photo anyway, and said your damn good.

‘I have had the odd comment about cleaning windows dressed as Simon, but that’s a no from me –  one job pays the bills and one is having fun raising money for charities, and maybe, building up a pension fund.