Maddy Connors and Yuko Nakao have big dreams for their micro-businesses: one aims to end period poverty in Indigenous communities while the other wants to save traditional Japanese metal crafts. Both are passionate about the economic standing of women.

As Australia’s economy recovers from the pandemic, the Global Sisters organisation is working to create a third option other than mainstream employment or welfare for women from diverse and disadvantaged backgrounds to earn money. 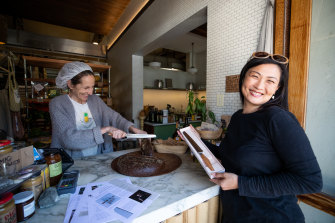 Yuko Nakao delivers traditional Japanese knives to Ludmilla Ivanovic from Iggy’s Bread, which has bought from her growing business.Credit:Edwina Pickles

The organisation has helped more than 5300 women set up or grow their micro-businesses (employing between one and four people) through business coaching and mentorship, access to corporate networks, microfinance, and marketing and sales support. Thousands more signed up for online programs during 2020.

“Everyone knows that COVID has affected women more severely than men, so there are a lot of women out there that need work,” founder and chief executive Mandy Richards said.

“Mainstream employment is just not an option for so many women and for so many completely different reasons, depending on their circumstances and also owing to systemic and structural barriers.

Ms Nakao and Ms Connors were among 30 women who took part in Global Sisters’ annual event to pitch business strategies to entrepreneurs and corporate mentors.

In January 2020, female workforce participation reached a peak of 61.5 per cent before falling away dramatically when the pandemic hit. It climbed up to 61.9 per cent in March this year but dropped again through the Sydney and Melbourne lockdowns.

October’s unemployment rate for women was at 5.4 per cent, compared to 5 per cent for men. 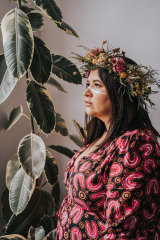 Women who had jobs were more than twice as likely to be working part-time than men, and 1.14 million more women than men weren’t in the labour force at all.

Ms Nakao understands the importance of women’s economic independence, saying she sees friends and family back in Japan who suffered trying to balance societal expectations while pursuing their own professional careers.

She was attracted to Global Sisters initially because of its microfinancing.

Her husband offered that she could borrow money from his landscaping business to grow hers, but she said while “my husband’s my A-team”, financial differences could cause tensions.

“I want to do it myself. And I don’t want to ask him, ‘Can I use this money for this?’ because my decision, my financial decisions and business decisions are different to my husband’s,” she said.

“The craftsmen are ageing and because there’s no money in it, the young people are not doing it,” she said.

Ms Nakao recently took on two casual employees, both mothers, saying she wanted to hire people like her and offer them flexibility because she knew how hard it had been for her to find work when her children were young.

Her pitch asked for network introductions and high-end stockists for her products.

She worked in public health across community and Aboriginal health agencies before she went on maternity leave and then the pandemic struck.

“Not only did I see a gap in the market for selling products, I also saw a gap in what services were providing to Aboriginal people with periods or even menopause,” Ms Connors said.

“Many young women in Aboriginal and Torres Strait Islander communities aren’t attending school … for several days during menstruation which means missing out on reaching their full potential.

“There seem to be less conversations about those things than anything and I think it’s still a really important health concern to be being addressed.”

She aims to build her business to sell the first Aboriginal-owned and designed reusable period products. But further than that, she plans to donate products each month to Indigenous communities to help address period poverty and eventually aim to reduce the stigma and shame around menstruation.

25 Jun 20
The Dixie Chicks have been churning out pop-country music for decades. And now, they’ll do…
Lifestyle
0