Treasurer Josh Frydenberg has slammed the actions of social media giant Facebook as unnecessary and heavy handed following the company’s decision to ban publishers and users in Australia from sharing or viewing any news articles on its platforms.

Mr Frydenberg told a press conference on Thursday afternoon he had been given no warning of Facebook’s decision which it said was taking to carry through on a threat it made in September after being unable to find a solution in discussions with the Australian government. 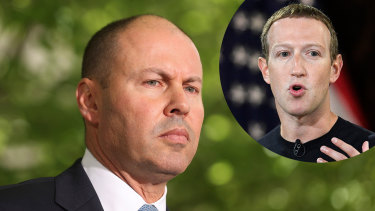 Treasurer Josh Frydenberg was given no warning of Facebook’s shock move.Credit:Alex Ellinghausen

“Facebook was wrong. Facebook’s actions were unnecessary. They were heavy-handed and they will damage its reputation here in Australia,” Mr Frydenberg said. “We certainly weren’t given any notice by Facebook.”

The bargaining code, which passed through the House of Representatives on Wednesday night, will require social media companies to pay media outlets for using their content. The bill is expected to pass the Senate and become law as early as next week.

Facebook’s Australia and New Zealand managing director, William Easton, said in a blog post early on Thursday morning the decision had been made because the proposed code “fundamentally misunderstands the relationship between our platform and publishers who use it to share news content.”

“It has left us facing a stark choice: attempt to comply with a law that ignores the realities of this relationship, or stop allowing news content on our services in Australia. With a heavy heart, we are choosing the latter,” Mr Easton said on the company’s blog.

Facebook’s stance was different to search giant Google, which had also threatened to exit Australia. Google has since struck multi-million dollar deals with major Australian publishers for the use of their content.

Nine’s outgoing chief executive Hugh Marks said Facebook’s decision was “a real shock” and showed why the code was needed.

“They are trying to prove how powerful they are. They’ve certainly proven that. The purpose of the legislation is actually trying to deal with that power, so they are kicking a massive own goal,” he told Sydney radio station 2GB.