The "Shazam! Fury of the Gods" star tweeted to his fans while sitting in his father's hospital room, updating them on his thyroid cancer.

Zachary Levi is staying by his father Darrell Pugh’s side amid his bout with thyroid cancer, but keeping in touch with his fans via social media.

The “Shazam! Fury of the Gods” star responded to a fan’s playful tweet overnight Sunday about where he is with a very sobering response. “Sittin in my dad’s hospital room with him,” he wrote. “He’s not doin so hot right now.”

He went on to detail how Pugh’s cancer had progressed from his thyroid and is now “slowly overtaking his trachea.” He said that while doctor’s may have “a trick or two” to give him some time, “Papa D is not long for this world.” 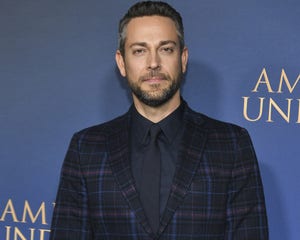 That same fan followed up and asked him what he needs right now, with Levi giving him a response indicating that he has come to terms with his father’s apparent terminal prognosis.

“I’m doin just fine,” he wrote, thanking the fan. “Death does not sadden or frighten me. It’s actually an incredibly powerful part of life. One that we’ll all reach one day.”

He shared that his belief is that when we die we “get to go back to God, the source, and be surrounded by the highest vibration of love.”

While he expressed that he’s come to a sort of peace with his father passing, he did follow up with a call for prayers in an additional tweet. His prayers, though, were not to change his father’s path but rather to help prepare him for it.

“Pray that he be as comfy and at peace as a man could get,” he asked his followers. “And that he head home with no fear or regrets, knowing how loved he is.”

Levi has subsequently been active on his social media, sharing a variety of posts and memes, and continuing to interact with his fans. He has not offered any additional updates about his father as of this writing.

Back in November, Levi had shared with his followers on Instagram a video of him and his father in the hospital ahead of a “big surgery.” Afterward, he shared that the surgery had been successful in removing 90 percent of Pugh’s cancer.

Levi can next be seen on the big screen in “Shazam! Fury of the Gods” on March 17. 17 May 22
Just a few months after the singer died of alcohol poisoning in 2011, NPH and…
Lifestyle
0