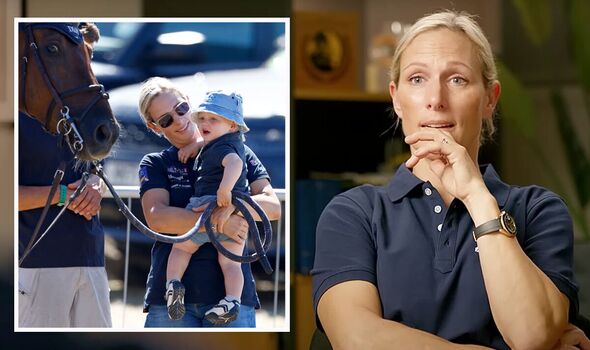 Zara Tindall is a British equestrian and Olympian, and in 2011 she married rugby star, Mike Tindall. Together they have three children; Mia, nine, Lena, four and Lucas, one. In the first episode of Mike’s ‘Mike Drop’ YouTube series, Zara opened up about the “guilt” she felt juggling her riding career and being a mother, as well as the set-up she and Mike had to parent the children when they were younger, and working.

Speaking about her horse Toytown, Mike mentioned it “wasn’t always rosy” as he “missed the Olympics” due to injury.

“It was heartbreaking,” Zara commented. “We had massive highs and lows.”

Mike then joked Zara has “just got a new stallion in [her] life” referencing himself. “I had to share you with Toytown and that was fine. In 2012 you married a legend,” Mike added.

Zara replied: “Who said that?” Before realising the mistake: “Didn’t we get married in 2011?”

Mike swore and corrected himself: “In 2011 you married a legend, and that led to another part of your career – being a mum. We had Mia in 2014, how much did being a mum change how you thought about riding and how much did you want to get back on the horse and back into it after having her?”

Zara explained: “After having Mia, I felt like this was my goal, to get back [on a horse].

However, she struggled, explaining: “But it was hard getting your body back when you’ve been riding for 25 years, and then your body is just completely not doing that.

“Your muscles [are] doing nothing and stretching and creating an amazing thing [a baby] but it’s completely different. And to try to get your body back to where it was, I found it was hard work.”

Juggling motherhood and a career wasn’t easy, but Mike and Zara found a way to make it work, adding: “Mia was along for the ride with us as well. She was very much taken around to the shows – which was easier when we had one.

“I found it hard getting myself back to it. Mentally, you feel guilty as a mother leaving your child to go and do something else.”

“Was that because you didn’t trust dad?” Mike joked. Zara laughed and revealed: “I had to ring you every day to make sure you were doing the right thing.” Mike added: “You gave me a list and timings!”

Zara continued: “You do feel guilty. I felt guilty all the time. Even just going to go and ride. I just thought that’s an aspect of my life now.”

Mike then touched upon the couple’s experience of miscarriage and said: “Seven-year period with kids, your riding’s been on and off, we lost a baby along the way, but you had to stop riding before that so it meant you missed another chunk of time. Do you feel through that period you were able to give your riding everything you wanted to give it?”

Zara replied: “Yes…there’s probably times I would look back on and shouldn’t have gone to certain places but I think – I was lucky…I’d had tournaments and been to an Olympics and been to World Championship and won.

“The stuff I missed – was down to another great chapter in my life and I’m very lucky that I could run them alongside each other.

“I’m lucky that our sport I could do both and still be able to ride at the top. It’s been a massive drive for me and I hope it makes me a better mother.

“They [the children] can experience it with us and with me and all those characteristics about life and competitive life – they will enjoy it as well.”

Mike joked: “Now that you’ve gelded your stallion and you know there’s going to be no more children down the line…” Zara interrupted: “You gelded yourself!”

“What is the drive now? Are there any itches you need to scratch in terms of the horse game going forward?” Mike asked.

“I’d love to win an Olympic gold!” Zara remarked. “So that’s driving me at the moment. I’d love to go to another Olympics.”

Over the years, Zara has visited Australia many times, she said it has “definitely” become a second home for her. “All the people we’ve met here, the fun times – I found my husband here! Best day of my life – it was! It was a fun day actually, we had a boozy lunch with the girls and then I met you!”