Britney Spears is in Maui, Hawaii, with her boyfriend, Sam Asghari, for the second time this summer. While enjoying another getaway to her favorite vacation spot, Spears has shared some of her trip with her followers on Instagram. On August 3, Spears shared some photos and videos of her with a local pig on Instagram, saying that spending time with the “peaceful pig” was therapeutic. In another Instagram post, Spears shared some photos of her in swimwear, and gave a free plug to Target for the company’s “bomb” bikinis. However, it was the very first post of the night that is raising eyebrows.

Spears posted a picture of a wooden door on Instagram. The door, slightly ajar, was the focal point for a lengthy Instagram caption in which Spears revealed that she ended up accidentally locking herself in the bathroom when she decided to take a bath at 2 o’clock in the morning. “I got a new scented lotion from Victoria’s Secret and I wanted to wear it because it helps me sleep better,” Spears explained. “I went to the bathroom and looked at my leftover coffee from earlier in the morning and said ‘gross’ but didn’t throw it away and then I looked for my face wash but couldn’t find it anywhere,” she added. Spears went on to say that she spent “about 15 minutes” looking for her face wash when she thought it was “probably in the other bathroom,” but what happened next has people talking. Read on for more.

Britney Spears' bathroom incident was a clear metaphor — intentional or not 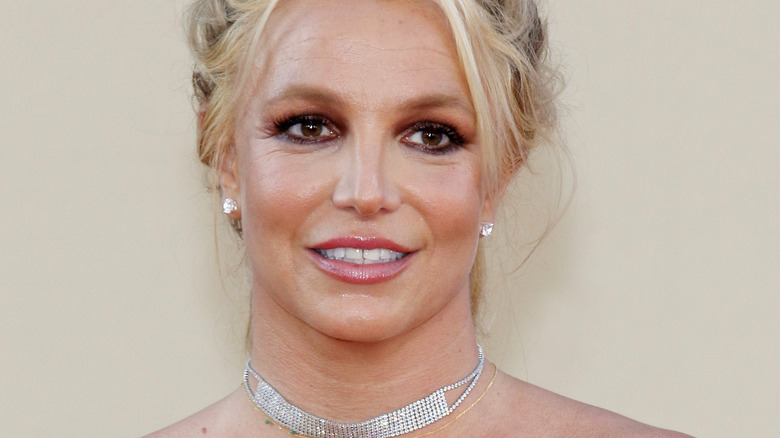 In her Instagram caption, Britney Spears wrote that she tried to open the door to the bathroom she was in, but it was locked. Moreover, the lock was “stuck.” From there, Spears detailed how she yelled for Sam Asghari’s help, but it didn’t do much since the guy can apparently sleep through an “earthquake!” Asghari finally woke up, but he wasn’t able to get his girlfriend out of the bathroom. Security was called, but they weren’t able to come right away, so Spears says she cleaned the bathroom while she waited. As she was cleaning, Spears found herself looking at the door. “I just looked at it for the first time with a yearning of just wanting it to open … would my eyes trick me and make it happen faster ??? My eyes widened and the door was more clear … more vast … I could see it with clarity and brightness … please open door,” she wrote. Just then, the security showed up. They told her it would take about 10 minutes, but after a little while, the door opened… “it finally opened,” the “Piece of Me” singer wrote.

In the comments section, many fans were quick to point out that Spears’ account of being trapped in a bathroom mirrored her real-life conservatorship. As the Daily Mail points out, it seems like Spears’ experience being locked in a bathroom was a metaphor for what else is going on in her life. 6 Jan 21
Pretty sure this is abundantly clear by now, but it has be shouted from the…
Music
0