'Irresistible', a New Movie Written and Directed by Jon Stewart, Will Arrive this May

Looking at the fresh-faced, impossibly handsome seven-man band on stage at Rod Laver Arena on Sunday night, it's hard to believe that GOT7 is one of the relative veterans of K-pop's global explosion. These young men have been on the road together since 2014.

The spinning top logo of the band's "Keep Spinning" tour suggests the momentum will end at some stage, but just not yet. And there was still plenty of literal spinning to do. The punchy, co-ordinated choreography that typifies K-pop's boy bands was in full evidence here, as were the tight rhythms, the catchy, likeable songs, the impeccable staging and light show and the wholesome vibe. 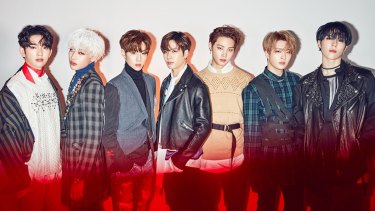 But let's face it: the narrative was wafer thin. "Our overall message is we want to bring you seven guys who started off in a dark place, and we need our fans to help us go to the light," said one, was it Bambam?

"Seven handsome, sexy, beautiful guys," corrected one of the others to the screams of the fans packing the arena and waving the band's signature green light sticks enthusiastically in response.

Neither I nor my accompanying daughter noticed any particular "darkness" in the first half of the show, apart from the tight black costumes. There was not much edge at all apart from a couple of tiny homoerotic signals to the mostly female fans, which elicited more screams.

The second "lighter" phase of the show involved fresh, white and denim costumes and more of the upbeat lyrics and pounding bass of the first half. These young men were modest, charming, repeatedly enthusiastic about being in Melbourne and did I mention handsome?

But their show lacked momentum. By comparison with Korean girl band BlackPink’s drum-tight performance at the same venue in June, it meandered somewhat. One member, Jackson, joked that the encore would be 20 songs long, and he was not exaggerating much.

The fans would no doubt disagree, but these veterans could have benefited from cutting this show a little shorter.

Jennifer Aniston and Brad Pitt were Hollywood’s “golden couple” for years, and although they have long since divorced, people still...

The world's first soft robotic heart is in development which could clear NHS transplant waiting lists. The “hybrid heart” will...