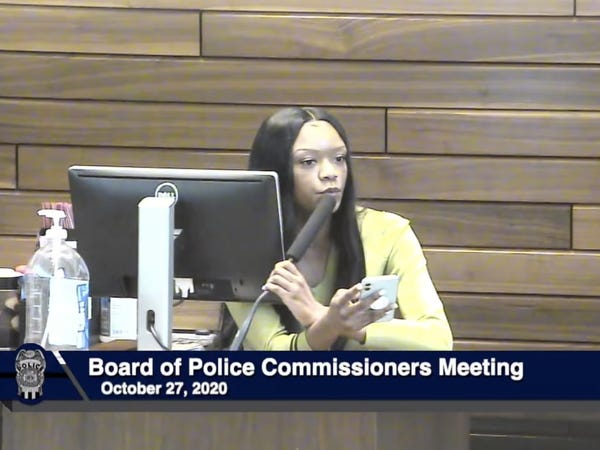 20-year-old Missouri activist Keiajah "KJ" Brooks went viral this past week after delivering an explosive speech directed at the Kansas City Board of Police Commissioners.

Brooks uploaded the video from the October 27 Kansas City Board of Police Commissioners meeting to her Instagram page before it was shared widely on Twitter. One upload has amassed over 2.6 million views; another has over 460,000 views. One viral tweet containing a video appears to no longer be available, but BuzzFeed News reported on October 29 that Brooks' speech had been viewed over 9 million times.

At the beginning of Brooks' speech, she sets the tone: "Fair warning: I'm not nice. And I don't seek to be respectable. I'm not asking y'all for anything. Cause y'all can't and won't be both my savior and my oppressor."

Brooks, who uses she and they pronouns, is a grassroots community organizer based out of Kansas City, where she told Insider she organizes protests and formerly worked for a civil rights organization as she wanted to "do deeper, intentional grassroots work."

She is a co-founder of Tha Chingona Collective, an "organization led by black, indigenous, and latinx women who live lives dedicated to the liberation of our peoples," according to the group's Instagram page. There, Brooks is one of two leaders of the Black facet of the organization.

As KCUR reported, civil rights groups in Kansas City have been calling for Smith's removal since June, when Smith came under fire for his handling of protests against police brutality. The Kansas City Star reported that Kansas City police have shot and killed twice as many Black men in the first three years of Smith's tenure than in the first three years as the previous chief, and the deaths of three Black men at the hands of police have eroded trust in the department.

In the first minute of her speech, Brooks accused police of using Black children as "photo opportunities," referencing a presentation given at the beginning of the meeting showing police officers at an event "taking it to the streets" and interacting with children and others in the neighborhood.

"I'm not here begging anything of soulless white folks and self-preserving Black folks," she says. "So I'm gonna spend the next two minutes reading yall for a filth, something i'm sure no one has ever done."

What follows is approximately three minutes of direct, personal insults directed towards the board's members, in which Brooks calls board president Don Wagner an "old white person with nothing but pure apathy seeping through the bulging veins of his paper colored skin" and saying that treasurer Cathy Dean "didn't have anything else to do at 8:00 in the morning but be rich and white and retired."

Members of the Board of Police Commissioners did not immediately respond to Insider's request for comment.

Those scathing insults are a large part of what made Brooks' speech go viral. "I think everyone's really angry, and they're kind of living their anger out through me," she told Insider.

That viral response, Brooks said, has made her be able to focus on grassroots organizing and activism, allowing her to be a full-time activist, but has also brought her recognition within the community itself. She also had to call out people for impersonating her on Venmo, posting her own Cashapp on Twitter.

Brooks told Insider that she wrote the speech during the meeting itself, and that many others present were being "really cordial" and "walking on eggshells."

"In the words of Assata Shakur, 'We have nothing to lose but our chains,'" Brooks told Insider. "There's literally nothing that we gain by being kind to these politicians, by sitting in meetings with them, by trying to be respectable, by just kissing their bottoms. We don't gain anything by doing that because we're not showing up as our true and authentic selves."

"I'm not gonna hold my tongue out of fear of hurting someone's feelings when there are people dying in the city," she said. 1 Oct 21
Jay-Z, the founder of Roc Nation, which collaborates with NFL and Pepsi for the LVI…
Music
0