The Backstreet Boys have never done a Super Bowl halftime show, but they had the chance!

The boy band performed the national anthem at the 2001 Super Bowl game in Tampa, Florida, while *NSYNC, Britney Spears and Aerosmith took over the halftime show. As Nick Carter tells ET, things could have been different.

“It’s interesting because we were presented the opportunity to perform at the halftime at the Super Bowl and it was in Tampa, my home town,” the singer told ET’s Lauren Zima while promoting his charitable game night with AJ McLean and *NSYNC’s Lance Bass and Joey Fatone. “At the time we came from the era of, we loved the Whitney Houston rendition of the national anthem. And for us, we got the choice and we passed on the halftime.” (laughs)

“But it was a memorable experience for everyone,” he noted. “And everyone was able to share [the stage] and *NSYNC did a great job at halftime, and I like to say we did a really good job at the national anthem as well.”

When asked if looking back he would have done things differently, Carter broke out some “Shape of My Heart” lyrics.

“Looking back on the things we’ve done… Would I have switched? I want to do it in the future. I say maybe another halftime when the Bucs go back to the Super Bowl,” he said, adding that it would be “pretty cool” if BSB and *NSYNC did one together. “And that again is going back to the era we came from, the late ’90s. It was a really beautiful time and I think everybody wants that again. They want that feeling coming out of this, everything that we have gone through together and society for the past year and a half. We want to be a part of that story, of love and growth and just coming out of the dark. I think that’s why this event is so special to us.”

In celebration of Pride Month, Carter, McLean, Bass and Fatone are hosting a Bingo Under the Stars event at The Grove in Los Angeles on June 18. The experience will also include surprise guests and the four singers performing a few pop classics and fan favorites from both groups.

“Maybe it’s the first of many things to come and, hey, if they want us to do a halftime at the Super Bowl, I’ll tell you what, there’s only one Backstreet Boys and there’s only one *NSYNC, and I think we do pretty well at it.”

The event came together after Carter and Bass got together and started thinking of projects they could do together. Carter had also worked with Fatone on his 2016 sci-fi movie Dead 7.

“Two rival bands for one good cause for Pride Month. We are going to be performing, doing something very special at The Grove and it’s going to be all for Pride,” Carter shared. “So we’re really excited about that. It’s the first time ever that Backstreet Boys and *NSYNC have ever done something together like this.” 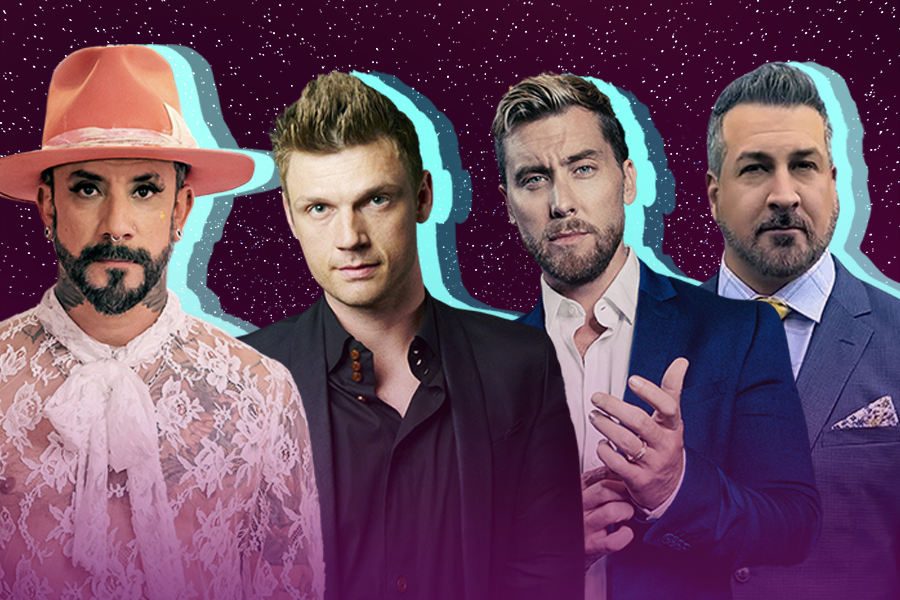 With the boy band rivalry now in the past, the singers are looking forward to working together in the future.

“Who knows where this relationship will go in the future, maybe it will blossom, maybe there will be a world tour together,” Carter expressed. “We did some stuff with our friends from the New Kids on the Block. It was a huge tour with Backstreet Boys and it was so fun. So you never know what could come from this.”

Carter did tease, however, that he and Bass were talking about the possibility of doing a podcast together. “That’s still on the table. There’s a little bit of a scheduling thing that we’re working through, but that’s one of the things,” he shared.

As for Carter and the rest of the Backstreet Boys, they rescheduled their DNA world tour for 2022 and have a Christmas album in the works.

“We have a lot of interesting surprises that we have in store for this year. We have pushed back our DNA world tour until next year, which I think will be a lot better for the whole world as we are still at the tail end of the pandemic,” he said. “So this year, there is something. I have mentioned it a little bit on our social media, got in trouble by our managers a little bit. Pulling it back off, you can go deep diving if you want, you can find it, but it has to do with an album that we are recording right now that is a specialty item and there are a lot of things that are going to come from it this year.”

Visit Bingo Under the Stars for more information.