“Grossed half a Billi on the Divide tour…”

Ed Sheeran is learning the ways of the hip-hop megastar. The above commercially revealing, braggadocious lyric pops up within “Take Me Back To London”, the fourth track on Sheeran’s new album, No. 6 Collaborations Project, which is currently the most popular long-player in the United States, according to Rolling Stone’s Top 200 Albums chart.

Sheeran’s boast might be frightfully un-British, but statistics prove that it isn’t hollow. According to industry trade title Pollstar, the singer-songwriter’s Divide tour grossed a world-record $432.4 million in 2018 alone.

It’s not just Sheeran’s bankability that makes him unique among music’s top live earners today, however. Another attribute marks him out as an even greater anomaly: his age. At 28 years old, Sheeran, alongside Travis Scott, is the joint youngest artist within the top 10-grossing stars in Pollstar’s latest global Midyear data for 2019 (covering November ’18 through May ’19). 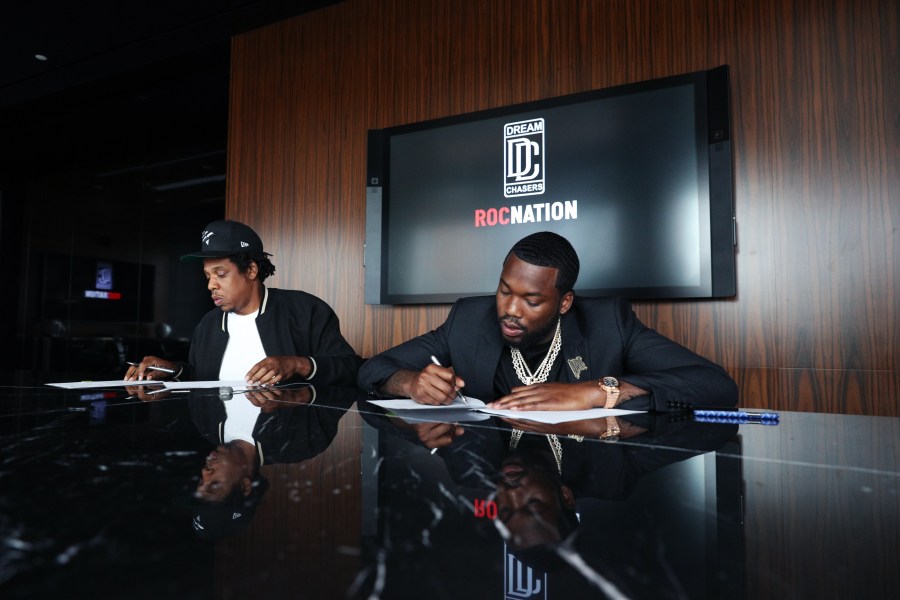 The next-youngest artist in this top 10 is Justin Timberlake who, at 38, is a full decade older than Sheeran. Here are two standout numbers to remember: Half of Pollstar’s 2019 global midyear top 10 artists are over 50 years old, and three of them (Elton John at no. 1; Fleetwood Mac at no. 3, Bob Seger at no. 9) have surpassed their 70th birthday.

(Before we get into it, a quick note on methodology: I have taken the average age of any band members up to a maximum of the five most prominent people in any case, meaning, for example, that the excellent Neil Finn, a touring member of Fleetwood Mac this year, is not counted within that band’s average age; I have also counted only the age of the main featured performer where he or she is the headline act backed by a branded band, like Bob Seger and the Silver Bullet Band or Bruce Springsteen and the E Street Band; in addition, for Trans-Siberian Orchestra, who are today made up of a wealth of nonfeatured performers, I have taken the age (56) of the one remaining founding member, Al Pitrelli.)

The average age of Pollstar’s top 10 global touring acts in the first half of this year, then, was 52.6 years old. This is rather thought-provoking news for the music business — because it represents the first time in recent memory that this number has topped half a century.

In fact, a trend appears to have taken hold over the past five years of Pollstar’s midyear top 10 global artists: They’re getting older and older. Consider that the average top 10-grossing act in H1 2015 was just 39.8 years old, more than a decade younger than this year’s crop. 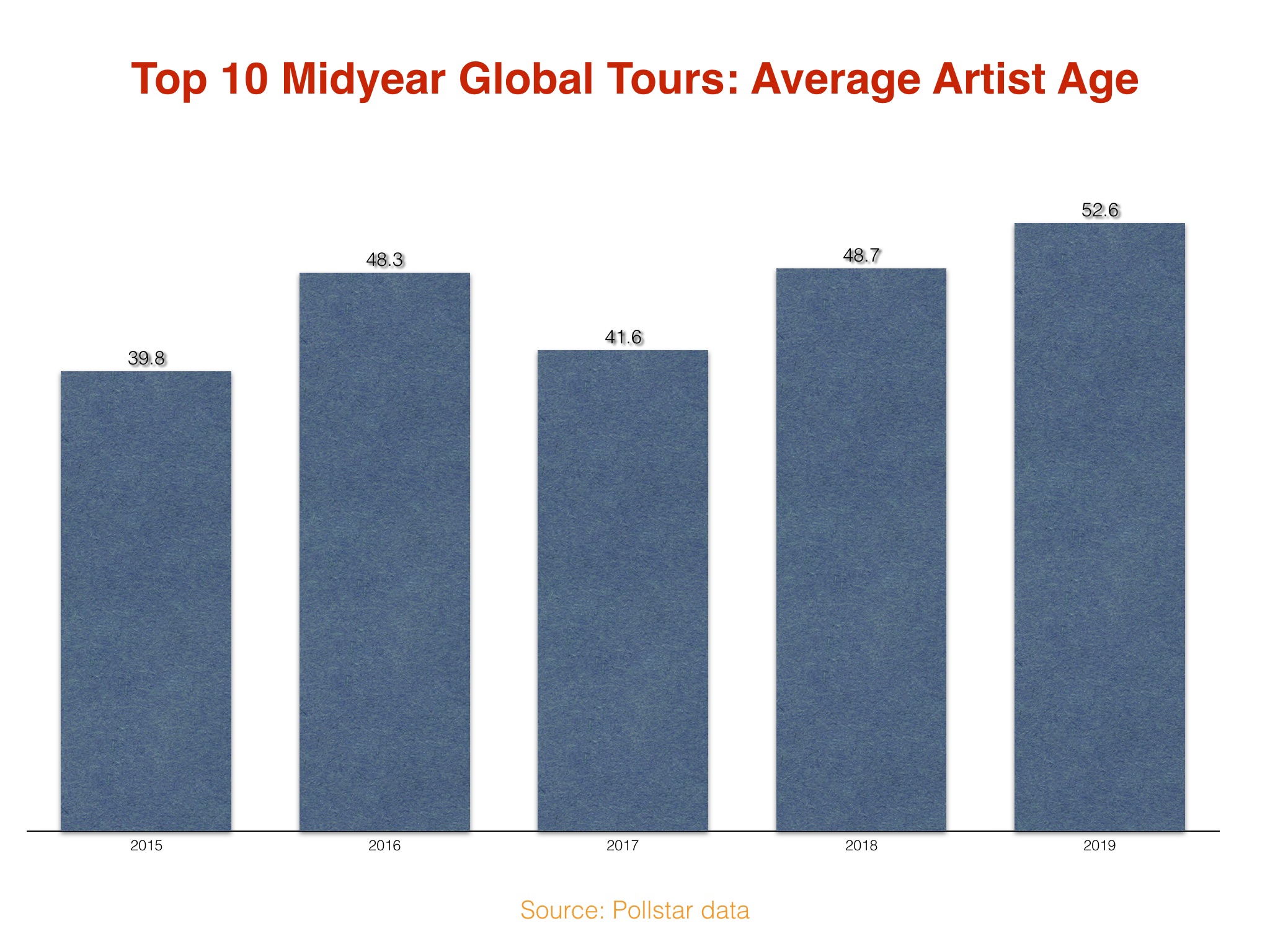 Such numbers will obviously raise concerns about the lack of new talent breaking into the upper ranks of blockbuster live tours – a worry that becomes all the starker when we consider how things have evolved in recent years.

2015’s Pollstar midyear top 10 list, with its average age of 39.8, contained just three acts under 40, including Sheeran and Disney Latin collective Violetta; yet it was topped by One Direction (average age then just 21), who grossed $108 million worldwide in the six months measured by Pollstar.

Generally speaking, this average age of 40-or-thereabouts applies for much of the past decade. In the full year (i.e., 12 calendar months) of 2009, for example, the average age of Pollstar’s top 10 touring acts was 41.1, thanks to then-under-40s like Britney Spears, Pink, Coldplay, and the Jonas Brothers all landing in the list. In the full year of 2013, this number fell as low as 35.3, due to the majority of Pollstar’s global top 10 touring artists (60 percent) being members of the under-40 club (Bieber, Bruno Mars, Rihanna, Swift, and One Direction) at the time.

Another important angle on all of this: As the world’s biggest live artists keep getting older, the average age of the biggest recorded-music acts is generally moving in the other direction.

According to a recent Nielsen report, the most “consumed” top 10 artists in the United States in the first half of 2019, across all formats, were, in order, as follows (with average age in brackets):

The average age there: 29.2. Without the anomaly of Queen (whose popularity recently got a uniquely big profile boost with the Bohemian Rhapsody movie, of course), this figure falls to 24.7.

Nielsen hasn’t always presented a plain artist list like this in its previous midyear reports, but it has traditionally revealed which albums are the most “consumed” in each six-month period — across streaming, digital track and album downloads, and physical purchases. We can therefore fairly measure the ages of the artists behind these albums as reflective of the biggest acts in each case. In H1 2017, thanks to artists like Kendrick Lamar, Migos, Future, Sheeran and the Chainsmokers, the top 10’s average age came out at 28.2; in H1 2016, with a top 10 led by Drake, Adele and Beyoncé, and also featuring Prince and Chris Stapleton, it was 32.1.

You’ll notice these artists are specifically U.S. bestsellers, while the Pollstar concert numbers cited above concern global tour revenues. Yet we can safely banish any thought that the vast difference in average top 10 artist ages (recorded music versus live) is down to a regional discrepancy: according to Pollstar’s 2019 midyear figures, the top 10 highest-grossing tour artists in North America alone (led by Pink, Timberlake and Elton John) shared an average age of 55.8 — even higher than the equivalent average age in Pollstar’s H1 2019 global Top 10.

Coincidentally enough, 55.8 is almost exactly double the age of young Ed Sheeran (28), who continues to prove himself a contemporary blockbuster pop star on streaming services and in record stores, as well as one of the most commercially successful touring acts in history.

Food for thought on that matter: According to Pollstar data, in the four years between the start of 2015 and the end of 2018, Sheeran’s global tours grossed $673.8 million. His average per-show gross last year was just over $8 million. With an additional 50-plus Sheeran concerts either already played or scheduled in 2019, you can reasonably expect him to add another $200 million-$400 million to that tally over the course of 2019.

This all means it’s looking eminently possible that, over the course of just five years (2015-2019 inclusive), the live shows of a singer-songwriter from the small town of Framlingham, England, could — driven by a relentless tour schedule and unmatched work ethic — actually get close to generating a full billion dollars. Forgive me: I mean “a full Billi.”

Tim Ingham is the founder and publisher of Music Business Worldwide, which has serviced the global industry with news, analysis and jobs since 2015. He writes a weekly column for “Rolling Stone.”