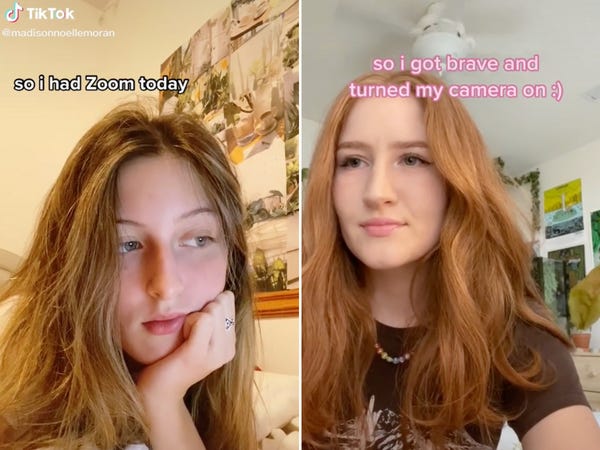 When Madison Moran, a sophomore at Michigan State University, started her fall semester online, she quickly noticed that none of her classmates had their cameras turned on. This left her professors teaching to dozens of small, black boxes.

Fifteen minutes into a three-hour lecture, Moran decided to switch her camera on. She filmed the event, and the teacher can be spotted smiling at the appearance of Moran's face.

"At least if she sees one face, she can communicate with someone and not feel like she's just talking to a blank screen," Moran told Insider.

She posted the video on TikTok, and it quickly gained 2.7 million views.

i genuinely feel bad for teachers/professors. it must get so lonely sometimes. they’re really trying, ya know? ##zoom ##msu ##michiganstate

Moran said the action changed the tone of the classroom. With her and another student using their cameras, it was enough encouragement for other classmates to do the same.

Now she estimates about 10 people consistently turn their cameras on in the class.

"They've all been talking to the teacher, and she's been laughing a lot more," Moran said. "She's really sweet and she clearly cares."

Rachel Greathouse, an adjunct art professor, said switching to online classes was a lot different than she had initially imagined.

"I think it's just that the human element is missing," she told Insider. She mentioned that in an in-person classroom, she could notice cues and gauge her students.

Now, with her classes online, those cues are missing. She estimates that less than half of her students are online during the synchronized classes, and only one or two will have their cameras on.

"With teaching, you're kind of putting on a little bit of a performance," she said. "You have to be interesting to keep people engaged, and it is hard when every camera is off … so you kind of feel like you're talking to a wall."

The few who do have their cameras on have made a difference, she said.

Greathouse mentioned that in one class, she has a student who has his camera turned on, sits with his dog, and spends the time genuinely laughing at her jokes. She told Insider that students like that make all the difference.

However, Greathouse said it was important to her that students have the option to have a camera on or off.

"You never know why they don't have their camera on," she said.

For some students, having their camera on might not be something they're comfortable with, so Greathouse said it's never been a requirement in her classroom.

Moran said she felt like having her camera on forces her to focus on the class.

Others have quickly followed Moran's trend by turning on their cameras

"My parents are both teachers, and my mom called me crying the other day because her students had their cameras on for the first time. Thank you," one TikTok user wrote.

Another added: "As a teacher, thank you for doing this. Students don't realize that we're looking at [a] wall of black screens all day."

Other TikTok users have followed the trend. Madison Christian posted a similar TikTok, which featured her turning on her camera during one of her forestry classes.

In the video, Christian says she's nervous but that she wants her teacher to feel appreciated.

It looks like he did, and viewers can hear a sweet "yeah" from the professor before the video cuts off.

"If anything I've done were to go viral, I'm glad that it was this video," she told Insider of her TikTok, which had 2.6 million views at the time of writing. "I honestly feel a bit silly having something so simple be seen as such an admirable thing."

"Overall, I think the video has made people consider the little things that they can do to make life more enjoyable for others," Christian added. "I am happy to have helped spread that message."

If you're a teacher, student, or parent who wants to share their story on what it's like to go back to school right now, get in touch at [email protected]. 14 Aug 21
Has a golden age of music videos returned? You might think so, looking just at…
Music
0