Kelly Clarkson is very much separating herself from her estranged husband, Brandon Blackstock. The ex-couple — who share two children together — made it clear they were going their separate ways in June 2020 when Clarkson filed for divorce while citing irreconcilable differences (via Entertainment Tonight).

The two never issued an official statement regarding their split after almost seven years of marriage, though their divorce hasn’t exactly been super private — or even overly cordial for that matter. Many of the developments in their split have played out in the public eye through the gossip columns, including the revelation that Clarkson will have to pay her ex $150,000 a month in spousal support while their case is still in court, as well as another $45,000 “every month or so for child support” (via TMZ).

The “American Idol” alumni will not be responsible for paying for the ranch in Montana they once shared, where Blackstock is reportedly living more permanently after pulling back a little on his job. Blackstock is actually Blake Shelton’s manager, but reportedly will be spending minimal time taking care of the country star’s career and instead intends to become a full-time rancher (per Us Weekly).

Well, now Clarkson is making it even clearer that she doesn’t particularly want to be connected to the manager turned rancher any longer. Read on for what she’s asked the judge to do in their increasingly nasty divorce case. 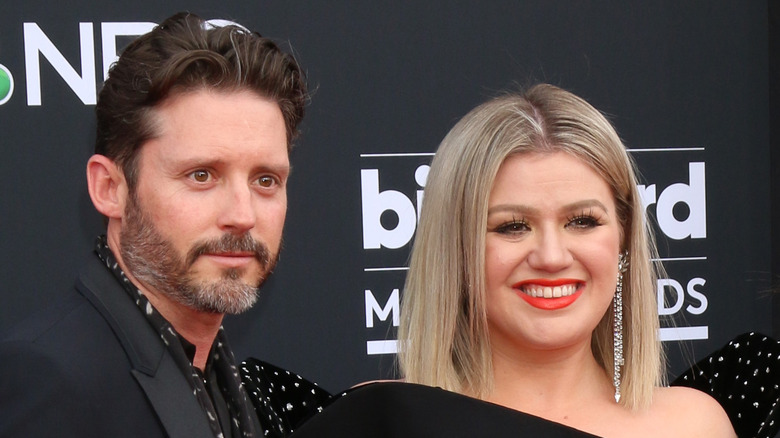 Bye bye Kelly Blackstock and hello (again), Kelly Clarkson! Though she never changed her name professionally, in her private life, Clarkson went by Brandon Blackstock’s last name after they tied the knot in 2013 — but no longer. According to an August 11 report from The Blast, the “Since U Been Gone” hitmaker has officially filed to go by her maidan name once again as she and her ex continue to fight it out in court over finances and the custody of their children. The former couple share daughter, River and son, Remington.

That’s not all the star has requested though, as it sounds like Clarkson is ready to be divorced as quickly as possible more than a year after she initially filed to end her marriage. The Blast confirmed that “Clarkson is asking for a default judgment in her ongoing case, which will officially make her divorced.” Sources claimed that Clarkson’s requests may well be granted pretty soon as Blackstock supposedly “isn’t putting up a fight in this department” as they both agree they want to be divorced asap, while the outlet also noted that “most of the time the judge signs off on these sorts of requests right away.”

While we’re definitely sad to see things didn’t work out for these two, we’re just hoping they can keep things cordial for the sake of their two children.

20 Feb 20
Justin Bieber and James Corden are showing off their dance moves — with a little help.…
Music
0

29 Jul 21
DaBaby released new video “Giving What It’s Supposed to Give” on Wednesday. In the clip,…
Music
0