Pianists and string players often hold the monopoly on the soloist's spotlight, especially on Melbourne's stages. So it was a rare pleasure to see one of Australia's finest woodwind virtuosos, oboist Diana Doherty, taking centre stage at Melbourne Chamber Orchestra's latest outing.

Best known to concertgoers as the principal oboe of the Sydney Symphony Orchestra, Doherty is a performer of such technical command she can master even the most challenging music with expressive ease. 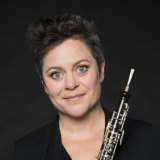 If I were to be overly pedantic I might point out that this program's title was a little misleading. Not only were Doherty and the musicians of the MCO playing on contemporary instruments, not period instruments (as the concert's epithet might suggest), but little if any effort was made to observe historical techniques.

While such details have become the de rigueur expectation of early music performance, their absence here proved only a minor shortcoming. Whatever it lacked in Baroque authenticity, the performance more than made up for in emotional sophistication, thanks to director William Hennessy's charismatic leadership.

A tasting menu of concerti grossi, including a sprightly account of Handel's chromatically mischievous Op 6 No 8 in C minor, whet the audience's appetite for a pair of flawlessly executed Baroque oboe concerti (Vivaldi's double Violin and Oboe in B flat and Albinoni's G minor). But it was the Victorian premiere of Joe Chindamo's Sanctuary for oboe and cor anglais that emerged as a highlight. Alongside Alexandre Oguey, Doherty delivered a bravura display, easily shifting gear between moments of quiet lyricism and hectic, jazz-infused exuberance.