Season 4 of 90 Day Fiance: Happily Ever After? has been full of disappointment for Nicole Nafziger but the latest episode has viewers wondering if she was dumped by fiance Azan Tefou.

After Azan told Nicole to cancel her latest plans to visit him in Morocco, the breakup conversation started. However, Nicole says it’s just rumors and that she and Azan are still going strong.

Nicole’s entire 90 Day Fiance storyline is centered around trying to get to Morocco and, at one point, Grenada so she can get her hands on Azan. The problem is, he is not in any rush and keeps canceling her plans.

The first big disappointment came when Nicole was forced to cancel her trip to Grenada with May and her stepdad. Azan called it all off the night before and said he had a family emergency.

While Nicole seems to know what was going on (or at least what he said was going on), she refused to tell anyone what his “family emergency” was.

All was forgiven though, as Nicole searched for plane tickets to Morocco. She was pleased as punch that she could use the refund she received on the Grenada tickets to help pay for the Morocco trip.

Nicole was really excited to announce her trip to see Azan and even hinted that it would be THE marriage trip after having canceled so many times now that most viewers seem to believe Azan has absolutely no plans to marry Nicole.

At this point, Nicole knows how pretty much everyone, including her own family, feels about her relationship with Azan. And let’s face it, from the outside perspective, things look pretty bad.

We’re guessing that if Nicole were ever to tell the whole truth (for example, what exactly that “family emergency” was) it probably still would look pretty bad.

Even though it’s not far fetched after Nicole was forced to cancel another trip to see Azan without any explanation for 90 Day Fiance viewers, that there might be some questions about whether or not they were still together.

The breakup rumors clearly struck a nerve too, because Nicole responded recently to clear things up.

In her Instagram stories, the 90 Day Fiance star shared a comment that claimed Azan dumped her because she didn’t have money for him and insisted that it was “100% not true.” 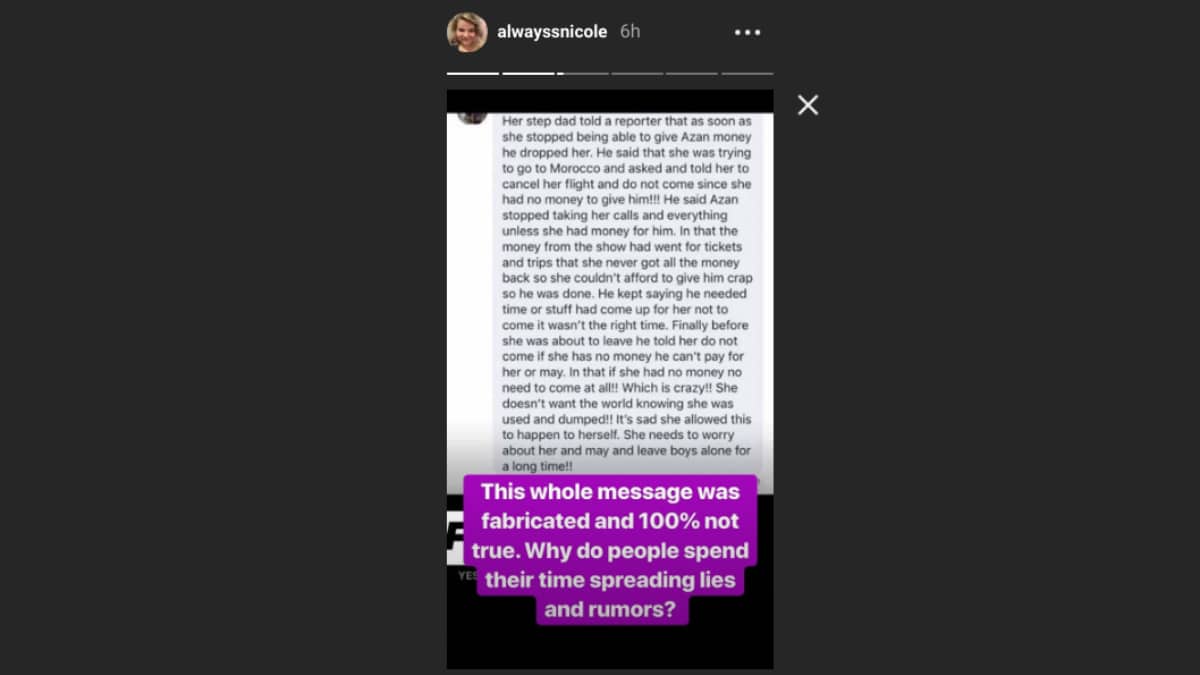 At this point, 90 Day Fiance viewers don’t seem convinced though, and Nicole still hasn’t been back to Morocco to see Azan. 26 May 22
This year has produced several films if terrorist attacks in France. One Year and One…
TV & Movies
0