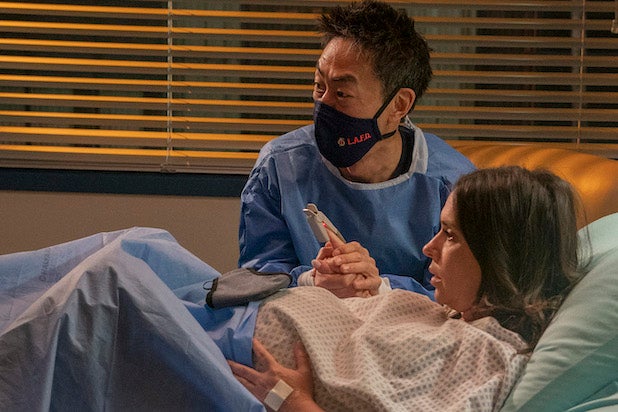 (Warning: This post contains spoilers for Monday’s midseason premiere of Season 4 of “9-1-1.”)

Maddie (Jennifer Love Hewitt) and Chimney (Kenneth Choi) welcomed their baby girl into the world on the long-awaited return of “9-1-1” Season 4 Monday, an episode that ended with the joyous birth amid much chaos and potential tragedy. But since that last part is par for the course on “9-1-1,” let’s first dive into the delivery of that adorable little one, who, believe it or not, was played by a robot.

“I was really nervous because I was like, wait, we’ve all had to come back to work, does this mean that newborn babies have to come back to work, too? As a real-life mom I was like, oh my God, please don’t let us have a real baby,” Hewitt told TheWrap. “So I thought it was really responsible and great of them to actually choose to do this robot animatronic baby. And now I secretly want to get #robotbaby trending. So it was good in that way, but it definitely has been weird, too. We’ve only been able to start using a real baby to kind of go back in and put those moments in in the last couple weeks. And so we’ve pretty much, predominantly only been working with the robot baby.”

She continued: “And it’s really, it’s a trip because they look so real and they are real. But then, like, all of a sudden the guy will forget to tell you that he’s, like, turning on the movements. And so you’ll be holding it and it will turn its head, but it doesn’t turn its head like a real baby. And then you’re like, ‘Ah!’ So I’ve had a couple of nightmares about a robot baby off camera. But, on camera, I love her to pieces.”

OK, setting aside the fact that in real life it’s a robot baby, Maddie and Chimney’s on-screen daughter made her parents very happy with her arrival, even though she caused them a great deal of stress in the days before her birth while they attempted to come up with the perfect name. Ultimately, they didn’t choose one in time. At the last minute, Maddie chooses to name her Jee-Yun, after Chimney’s mother.

Hewitt personally loved watching Maddie and Chimney agonize over the choice and seeing what Maddie came up with in the end was truly “perfect.”

“I’m glad that they kind of showed that struggle because, in my real life, I will say that when I was pregnant with my son and my daughter, I still stand by the fact that even with labor, the hardest part of having children is naming them, because it’s their name!” the “9-1-1” star said. “It’s who you send them out in the world to be. And it defines them so quickly. And people get really judgy about it. So you never wanna feel like, do my friends hate the baby name? So I love getting to play that kind of stressed-out feeling about the baby name because it is such a big deal. But I love that they chose to connect it to Chimney and to give him that moment. And I just loved the way Kenny played that moment. It made my heart go very full the way he did that. So I loved what they got to.”

Now back to the chaos and potential tragedy of Monday’s “9-1-1,” which juxtaposed scenes of Chimney at Maddie’s side while she was in labor with scenes of his brother Albert (John Harlan Kim) almost bleeding out in the wreckage of the pileup the 118 spent the whole hour responding to. Luckily, he turned out OK, but Hewitt thinks the balance of life and almost-death for the episode was warranted.

“I love that they tied them together, particularly in the time that we have all found ourselves,” Hewitt said. “And we’re seeing so much of people’s human spirit choose to live and push through, even in these circumstances. And just like surviving this time. I think it’s real and I think it is what life is.”

Maddie and Chimney are now settled at home with Jee-Yun, with the promise that visitors will be allowed soon, especially Buck (Oliver Stark) — Uncle Buck, that is. And we’re really hoping you got the show’s reference to the 1989 John Candy film, and so is Hewitt.

“I’m so curious to see how many people actually get it… If they’ll just think that we’re crazy, you might not understand why we’re why we think that’s funny. But it will be dropped to the appropriate amount of time, I promise.” Brooke Vincent announces her pregnancy with OK!When you subscribe we will use the information you provide to send you these...