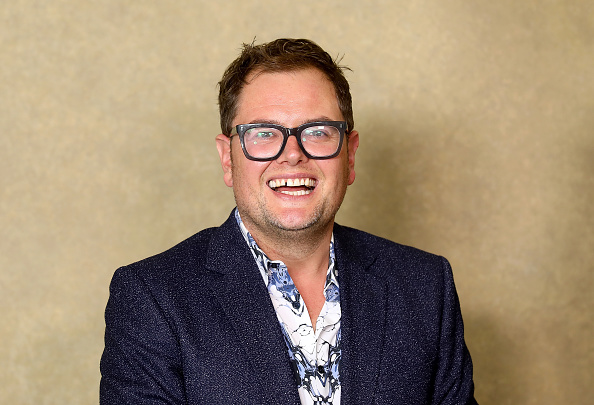 Alan Carr has opened up about his plans for the next year following his current tour, explaining he wishes to take some time off as he needs to sort out his ‘work/life balance’.

In January this year, it was confirmed that the comedian and his husband, Paul Drayton, were divorcing after three years of marriage, having been together for a decade prior to their wedding.

A statement released at the time read: ‘They have jointly and amicably made the difficult decision to divorce and go their separate ways. We request that their privacy is respected at this sensitive time.’

Alan, 46, is currently on tour in Scotland with his Regional Trinket show, which details some of the challenges he has been facing in his personal life.

Speaking to Laura Boyd for STV’s What’s On Scotland programme, he said: ‘I wrote it before Covid. We had a week to go and it was all written and done.

‘It was about me getting married and Adele getting ordained especially to marry me and Paul.

‘But then, during Covid, the relationship fell apart, and I was divorced when we came out the other end.’

The RuPaul’s Drag Race UK judge continued: ‘So it’s probably my most personal [tour], but it sort of works and it’s quite raw and I go to places I don’t normally talk about. It’s like therapy really.’

He explained that while his year has been ‘amazing’ professionally, on a personal level, ‘it’s been a bit rubbish’.

The presenter added: ‘I’ve got to sort out that work/life balance. Next year, you’ll probably see a bit less of Alan. I’m going to sort myself out. I think I’m ready for it and, who knows, I might find love.’

Alan speculated if perhaps a ‘nice Scottish man’ is on the horizon for him, recalling one man who he spotted in Scotland who did pique his interest.

‘There was a man wading in the rivers [in Inverness] and I like a man in waders…’ he recollected.

During a recent appearance on Lorraine, Alan described how his tour has been like ‘therapy’ for him following his split from Paul.

Outlining how the writing process for the show came ‘from the heart’, he said: ‘It’s quite emotional, uplifting and it was actually my therapy really.’

What’s On Scotland is due to air tonight at 7pm on STV.