Like everyone else on the planet, the couple played by Anne Hathaway and Chiwetel Ejiofor in Locked Down are trapped indoors, left to grapple with their pandemic fears and frustrations while also dealing with being stuck together. But whereas others turned to baking sourdough bread or doing puzzles, Linda and Paxton hatch a plan to steal a diamond from a shutdown department store.

Locked Down has comedy and drama, romance and a heist to boot, but it’s also a movie about the first COVID-19 lockdown coming out as we find ourselves in a second and begs the question: Can viewers enjoy pandemic content as the pandemic rages on around us?

“I can only speak for me and what I felt when I was reading the [script] — and so, by extension, what I was hoping that an audience would get out of it — was that it really reflected what we’ve been experiencing in a certain way,” Ejiofor tells ET’s Rachel Smith. “And I felt it did that with a real sense of hopefulness and a sense of uplift and a sense of optimism and this real idea of joy and finding what is joyful in your life.”

Hathaway agrees. “I know I need a bit of release,” she weighs in, adding that in addition to highlighting the need for joy, Locked Down “hopefully highlights the absurd, without being disrespectful of or diminishing of the pain and the loss that people have experienced that we’ve all felt this year. But these are strange times, to say the least, and our ways of coping with them have been deeply human.”

“If you’re in the camp that I’m in,” she continues, “I think human beings are deeply funny, and if you feel that way, then there’s a very good chance that you’ll enjoy this film.” 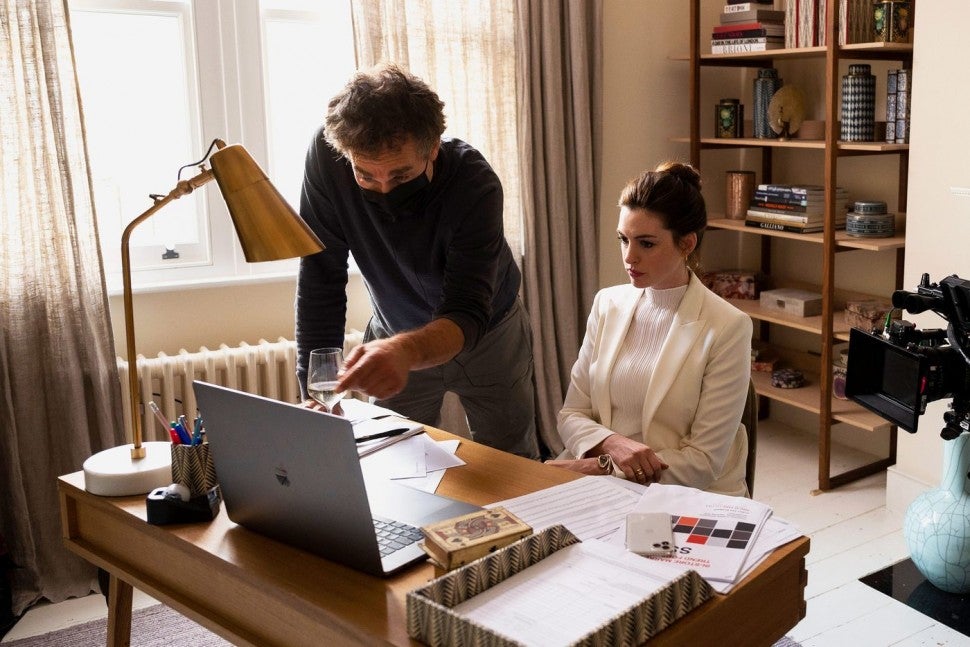 Locked Down was written by Steven Knight (who also penned Hathaway’s Serenity) during last summer’s quarantine. By September, director Doug Liman was on set with his leads in London, shooting under COVID-19 safety protocols: Diligent testing and mandatory mask wearing, with many of the supporting cast — including Mindy Kaling and Sir Ben Kingsley — appearing via Zoom.

“This was at a time when the film industry was, for the most part, completely shut down, so it was a real privilege to be able to go back in and make a film,” Ejiofor says. Hollywood had only recently begun testing the waters of returning to set, with made-in-lockdown movies such as Songbird getting cameras up in L.A. and Locked Down in the UK.

Yet, “I felt perfectly safe,” Ejiofor affirms, “because I knew that everybody [was being] very, very diligent and taking all the requirements very seriously.”

“We had to be COVID tested and it was the up-the-nose COVID test. Some people found that quite difficult and really challenging, and not a single person complained,” Hathaway adds. “They would have a physical reaction to the experience — it would be very uncomfortable to them — but they all knew it was what they had to do. We would be in hot rooms, they’d be carrying heavy equipment, and they would not complain or take their mask off, because they knew it was necessary to keep each other safe. Nobody felt that more than me and Chiwetel, ’cause we were the ones who had to take our masks off in order to make the film.”

“I just really want to shout it out to them,” she concludes. “They really took on that extra dimension of filmmaking, more so than even we had to.”

Locked Down premieres on Thursday, Jan. 14 on HBO Max.