The Bachelorette star Becca Kufrin has learned that her ex-fiance has moved on.

She announced her split from Garrett Yrigoyen in early September after weeks of speculation that they had ended their engagement.

While we don’t know the exact date they ended their relationship, it appears that Garrett Yrigoyen was more than ready to move on.

Becca hasn’t commented on Garrett moving on so fast, but she has been sharing some passive-aggressive comments on social media, and fans believe she may be sending him a message.

So far, she’s shared two posts that could be seen as shading Garrett.

Becca Kufrin appears to shade Garrett after their split

“Sunday lesson,” Becca shared on her Instagram Story over the weekend, according to US Weekly. “Be mindful of how you react to people when you feel disrespected.”

This week, she shared a post from the E2 Family Winery, where she said goodbye to sober October. She revealed that she was drinking because of election night, but added that she was saying goodbye to things in her life that sounded like a good idea at some point but that she’ll never do again.

“Thank goodness we’re into November, and election night is the perfect excuse for a glass of @drinkbourdon (or 7). Goodbye Sober October. Like some other things in life, you seemed like a great idea at the time but something I’ll never feel the need to do again,” Becca wrote. 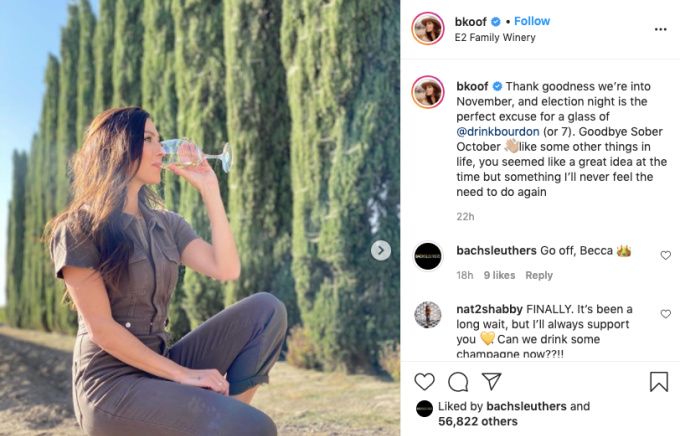 Is she talking about The Bachelorette or dating Garrett? She didn’t clarify in her post or in the comments.

On the weekend, Garrett seemingly went public with a new relationship by sharing a photo of himself and a mystery woman who has since been identified as “Alex.”

Garrett didn’t confirm a relationship, but when someone asked him if she knew what she was getting into, he laughed it off, saying that they would find out.

After the breakup, it was primarily Becca who handled the split in the public eye.

She released a statement to confirm the news on her social media, and she discussed the split at length on her podcast.

Garrett never released a statement about the split, but he did go ahead and delete all his photos of Becca from his Instagram feed.

He also took a trip with his friends, avoiding any questions about his breakup.

The Bachelorette airs Thursday at 8/7c on ABC.

Get the best celeb exclusives and video house tours to your inbox every evening with our daily newsletter Tess Daly...