‘American Idol’: Top 5 Are Revealed as 2 Fan-Favorites Are Booted Off

‘American Idol’: Top 5 Are Revealed as 2 Fan-Favorites Are Booted Off

After a week off, Bill Maher was back on Friday with a new episode of “Real Time,” and he spent a considerably amount of the show giggling about the ongoing scandal engulfing Florida congressman Matt Gaetz.

The funniest bit came during the episode’s mid-show gag, where Maher brought back is recurring “24 things you don’t know about…” sketch, where he parodies the way glossy celebrity magazines promote people.

“One of our favorite segments on the show, as people know, is 24 things you don’t know about. Which one of those tabloids stole from us and did as their own. I hate that the people rip us off like that,” Maher joked at the start of the gag. “But we thought you know, it’s such a good thing to let people know about somebody who they’re getting curious about, and this week everyone’s curious about this Matt Gaetz guy. So we thought what better time to do Matt Gaetz: 24 things you don’t know about me.”

Quick catch up for those of you who need it: The New York Times reported last week that the Justice Department is investigating whether Gaetz, 38, violated federal sex trafficking laws by having a sexual relationship with a 17-year-old and paying for her to travel over state lines. According to the Times, the investigation was opened under Attorney General William Barr in the final months of Donald Trump’s presidency. It’s part of a larger investigation into one of his political allies, a former Florida county tax collector named Joel Greenberg indicted last summer on multiple federal charges, including for the sex trafficking of a minor. Greenberg has pleaded not guilty.

There have been a lot of twists and turns in the investigation since then, such as the news he sought a blanket pardon from Trump last year, and that the investigation is looking into the possibility Gaetz used Venmo to pay prostitutes. Gaetz denies the accusations, though Greenberg is apparently set to take a plea deal that may see him testify against Gaetz.

Anyway, back to Maher. He listed off several fake facts about Gaetz, and rather than belabor the point, we’ll just list them:

“My favorite dating app is Venmo.”

“I recently sponsored a bill to name a post office after Charlie Sheen.”

“I’m the first member of Congress to scent my press releases with Axe body spray.”

“I’d say Billy Eilish is hot, I guess, if you’re into older chicks.”

“I’ve been to over two hundred proms.” 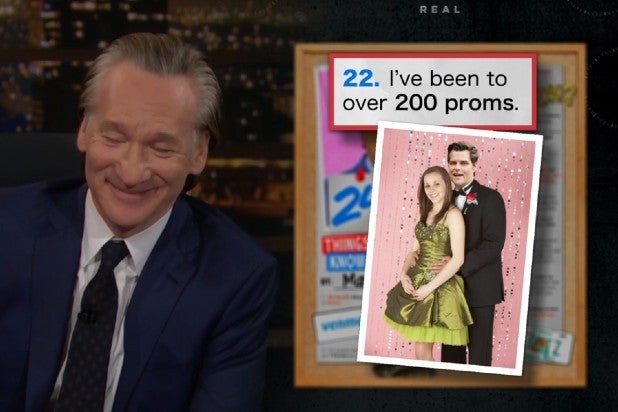 “I think all those Republicans who talk shit about me behind my back need to man up and tweet it from a fake account with a bogus name.”

“My go-to pick up line is do you come here often or does your mom just drop you off in the morning?” 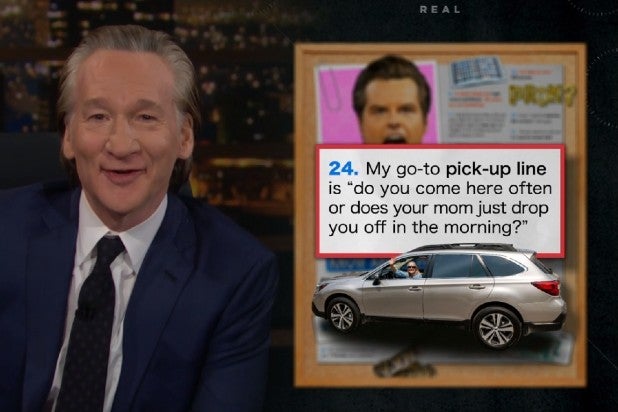