Breaking Dad returns to ITV this evening with its third series as The Chase frontman Bradley Walsh and his son Barney head on an action-packed road trip around Europe. To discuss all about the new series, the father and son duo joined Amol Rajan and Alex Jones on BBC’s The One Show to tease what’s in store – including a terrifying attempt at Dutch sport Fear Yeppin, also known as Canal Jumping. However, upon watching a clip from the new episode, Bradley detailed how it inspired him to go on an impressive weight loss journey.

Amol introduced the clip from Breaking Dad as Barney and Bradley watched a professional athlete take on the hair-raising sport.

As the cameras returned to the studio, Amol and Alex let out a laugh at the prospect of seeing Bradley take on the jump, adding: “Bradley, you don’t know what to make of that! Did you have a go yourself?”

The Chase star jumped in: “Amol, let me tell you mate, in Dutch that is called ‘Fear Yeppin’ and I promise you the word ‘fear’ – because when you start climbing that pole, there’s no way down.”

The One Show hosts let out a laugh once more before they turned their attention to a snap from Bradley’s attempt at the sport. 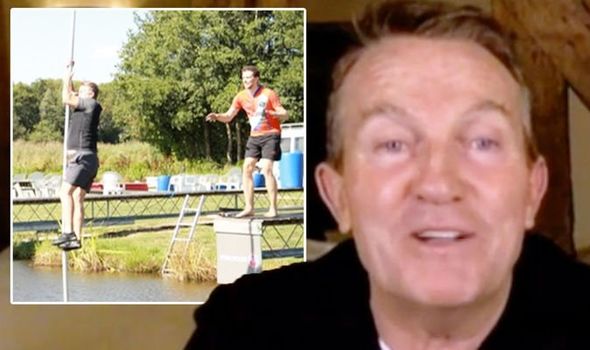 We will use your email address only for sending you newsletters. Please see our Privacy Notice for details of your data protection rights. Bradley Walsh embroiled in BBC and ITV ‘bidding war’

In a photo from the ITV series, Bradley can be seen clinging onto the pole used in the sport.

As it flashed up on-screen, Bradley began to laugh as he joked: “Look at the size of me, look!”

Bradley held his hand to his face in embarrassment while son Barney explained the intricacies of the stunt.

“Originally, because it was low-lying ground, it was a way for farmers to get to one side to the other but it was never that extreme,” Barney chimed in as his father continued to giggle.

“And they turned it into a sport and it’s a bit of an ancient sport in the Netherlands,” he added.

Bradley then revealed he and his son had met the world champion at Fear Yeppin before Alex chimed in with her thoughts: “I think there’s no doubt you get wet in that scene.”

The quartet shared a chuckle before Bradley detailed how that scene, in particular, led to him shedding “nearly a stone and a half.”

“Alex, you and I have worked together before,” Bradley began. “Since those days there, on that Fear Yeppin, I’ve lost nearly a stone and a half.

“I saw a photograph of myself welded to that pole and I thought ‘that’s it!’”

Alex then joked: “Well, every cloud then, Bradley!”