Kris Jenner Used to Carry Around $1,000 in Cash Everywhere But Stopped Because of 1 Reason

The untold truth of Ross Lynch

She captioned the picture, “Throwback thursday with two of my favorite ex-housewives Kim and Carlton #throwbackthursday#tbt #redbottoms 👠👠👠.”

According to the source, Brandi, Carlton and Kim had a sexual encounter that not only included the trio but may have also included a man. 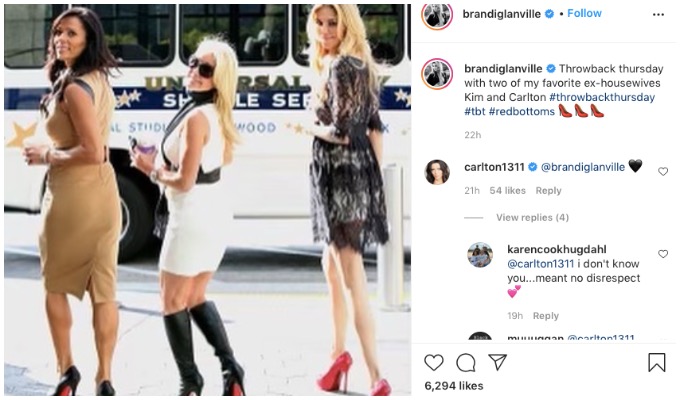 Zack said Kim was an obvious choice because she and Brandi are close friends.

“Let Kim Richards get some,” he said. He went on to say that Brandi had been hooking up with twenty-something-year-old men and speculated if one of them hooked up with Brandi and Kim together as well.

Denise Richards was the first to mention that Brandi slept with another woman from the group.

The former Bond girl said that Brandi claimed to have slept with every woman she ever met. Denise also said that it was someone not currently sitting at the table but did not reveal the woman’s name.

Real Housewives of Beverly Hills star Sutton Stracke also chimed in to confirm she had also heard Brandi had slept with one of the ladies in the group aside from Denise, but she did not name names.

Brandi is trying to get back on the RHOBH

Brandi has made no secret of her desire to return to the RHOBH. The former reality star discussed returning to the show with Andy Cohen on her podcast Brandi Glanville Unfiltered.

Andy told Brandi that she wasn’t friends with any of the other women on the show. He did, however, throw Brandi a bone by saying she was as close as she had ever been to returning to the Bravo hit.

The Real Housewives of Beverly Hills is currently on hiatus on Bravo.

Kris Jenner is the matriarch of the famous Kardashian-Jenner family. She and her family rose to fame on the show...