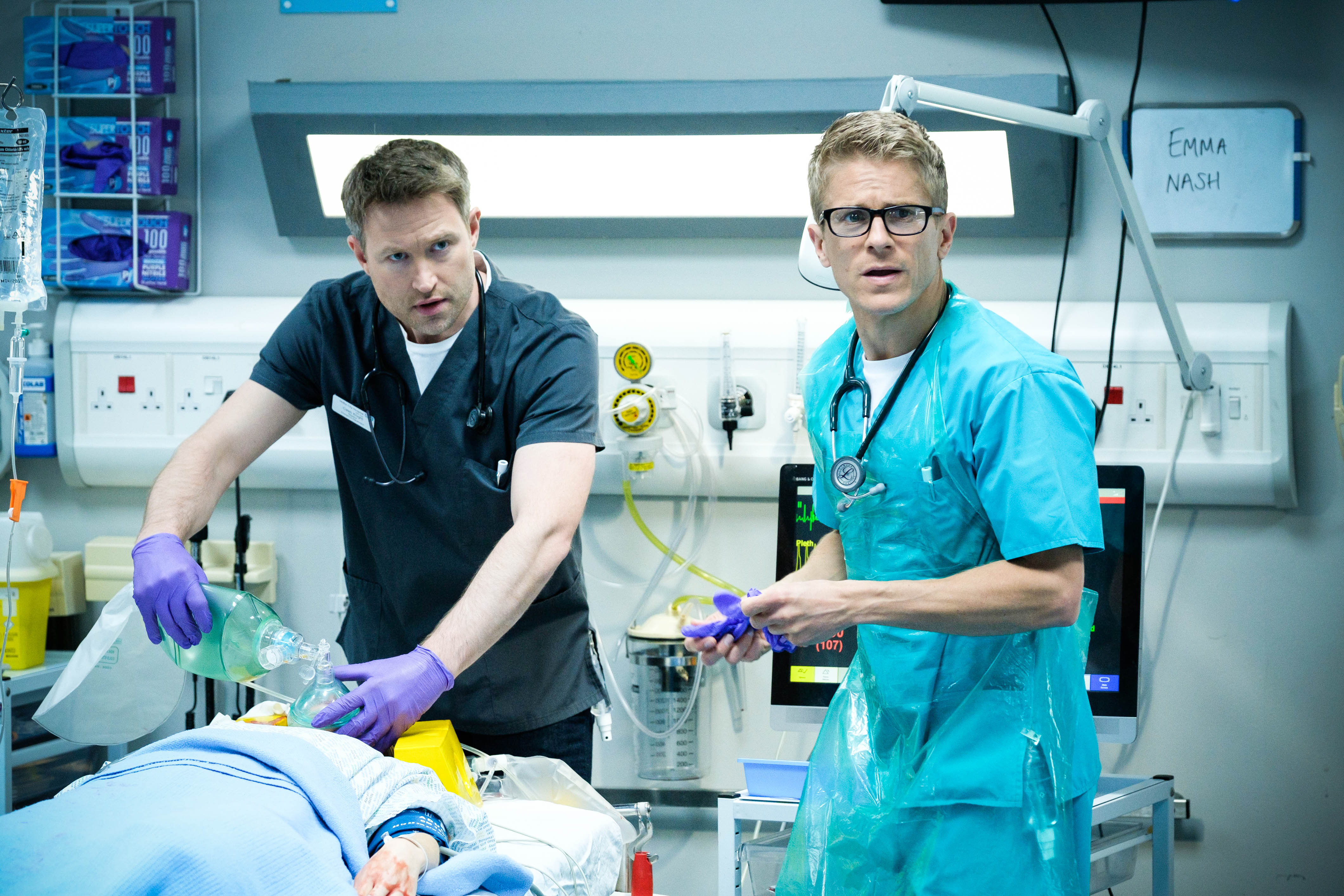 As Casualty celebrates its 35th birthday, it’s as popular as ever.

For millions of fans, it’s must-see TV every Saturday night – and still winning awards and accolades to prove it.

Just this year, Casualty picked up a BAFTA and the Soap and Continuing Drama Award in the RTS programme awards for the second year in a row. Not bad for a show that’s been running since 1986.

The reason for its success can be explained in one word: heart. Casualty is about ordinary people in extraordinary situations – doctors, nurses, paramedics and other hospital staff working together to help people who might be experiencing the worst moment in their lives.

Emotions are heightened, there’s stress and tension, people’s flaws and good and bad sides are shown, but with Casualty there’s always caring and compassion.

The basic format has remained the same since it began. We meet some people going about their lives, until someone gets ill or there’s an accident, the paramedics scoop them up and take them to the ED where hopefully they’ll eventually recover – while usually having their emotional woes sorted out by the compassionate staff, who are also dealing with their own troubles at the same time.

But within this very loose framework there’s been scope to explore all sorts of issues and to bring in many different types of character. The personal lives of the hospital staff have also taken centre stage, with romances, marriages, break-ups and bereavements all part of this very human drama.

There’s always something that you can relate to in any episode – a situation or character or dilemma that strikes a chord. Casualty has always been ready to expand this into storylines that deal with topics that are less talked about or hidden, such as domestic abuse, people trafficking, assisted dying, disability, dementia and mental health.

These themes are always approached very seriously by the writers and production team, with relevant charities and support groups consulted so the story is presented in a way that avoids stereotypes and goes for realism and empathy.

There have been hard-hitting scenes such as the 2010 story where beloved character Megan Roach returned to Holby with terminal cancer, and begged her old friend Charlie to help her end her life.

As two characters and actors who’d been in the very first episode, Brenda Fricker and Derek Thompson gave heartbreaking performances as Charlie’s instincts and training fought against his compassion for his old friend’s suffering. It was a beautiful but brutally difficult watch.

More recently the show has been exploring coercive control, with a female character, Tina (Adele James), behaving in an increasingly abusive way to her partner Jacob (Charles Venn). It’s rare to see such an issue covered in mainstream television, but Casualty has never shied away from difficult topics.

A recent storyline about Marty (Shaheen Jafargholi)’s mother Bibi (Fisun Burgess) suffering terrible pain after having a vaginal mesh operation highlighted a little talked-about aspect of women’s health, and the writers were also able to feature the fact that women’s pain is often ignored because it’s studied less and kept quiet.

Through the character of Jade Lovall (Gabriella Leon), who features prominently in the special feature length episode that launches series 36, Casualty has shed light on the everyday difficulties of a deaf person working in the NHS. One episode in which Jade met her birth mother was written and directed by people with lived experience of deafness and Gabriella Leon is deaf herself. It was accompanied by special sound design to take us into Jade’s world.

At work, Jade generally has no problems because of her disability and the only time we’ve really seen her struggle was when lip-reading became impossible when everyone was wearing PPE.

This came in the opener of series 35, a special that dealt with the first wave of the coronavirus pandemic. It broke with format to tell a powerful story from the point of view of Charlie and Connie (Amanda Mealing) looking back over the months when Covid threatened to overwhelm the NHS and a beleaguered and overworked staff had to go to work day after day fighting a virus that was little understood and nobody really knew how to treat.

It was raw, angry stuff that tragically hit home to the heart of the department as beloved character Noel (Tony Marshall) died of Covid. It was a powerful tribute to the work of NHS staff throughout the pandemic.

The show’s willingness to take risks with format has been another reason why it’s stayed fresh and relevant for 35 years. An astonishing episode in 2017 was filmed in one continuous shot, but it didn’t play safe – there were stunts and explosions, and at one point the cameraman had to run upstairs and then be lowered over a balcony to the ground, filming all the while. It was an amazing feat of teamwork and choreography by the cast and crew, really pushing the boundaries of what was possible.

Something that could only be possible in a show that has run for so long is to follow a love story that spanned decades almost in real time. Charlie and Duffy (Cathy Shipton) met when they started working in Holby’s ED at the start of their careers in 1986.

A close friendship quickly developed, but over the years fate sent them on different paths and other relationships and marriages intervened. Duffy left Holby altogether, and it wasn’t until 2016 that the pair finally acknowledged their feelings for each other and kissed. Married in 2017, they then faced the anguish of Duffy being diagnosed with dementia. Her eventual death was all the more poignant because viewers had loved and grown up with Duffy and Charlie as characters. ‘We wasted a lot of time, you and me,’ Charlie told his wife, ‘But we’re here together, exactly how it was supposed to be.’

Charlie will no doubt be on hand to help Ethan (George Rainsford) as he faces the loss of his own beloved Fenisha (Olivia D’Lima) – as will Noel, Ethan’s late brother Cal (Richard Winsor) and former fan favourite Big Mac (Charles Dale) in an episode that once again experiments with the format to go back in time.

The history of Casualty, its past stories and characters, are part of what it is now, and part of why it will continue to thrive, push boundaries, thrill and entertain us for many years to come. 18 Jan 21
https://www.youtube.com/embed/XBwRZNmubj4Ryan Reynolds is marking Betty White's 99th birthday with one of their most prized shared…
TV & Movies
0