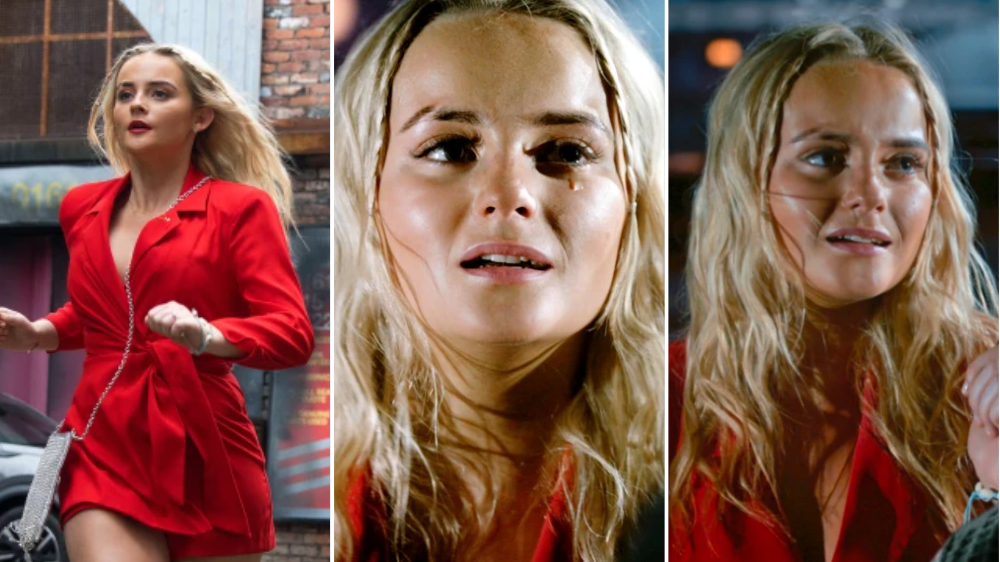 It’s the end of an era for Kelly (Millie Gibson) in Coronation Street as she bowed out of the soap following tonight’s dramatic scenes.

Kelly first appeared on our screens in 2019 when she came looking for her father, Rick (Greg Wood). Instead, she bumped into Gary Windass (Mikey North) who, unbeknown to her, had murdered him a few days prior.

Since then, Gary has taken her under his wing, supporting her through the death of her mum, Laura (Kel Allen), who had taken the rap for Gary’s crime.

In recent weeks, she has grown close to Aadi Alahan (Adam Hussain), and the pair were set to get married, which is when things started to go downhill for poor Kelly.

Ahead of her engagement party, Kelly discovered the horrible truth about her dad’s death, and the real culprit behind it.

Desperate for revenge, she sought out Kieron (Pat Lally) and ordered a hit on Gary. Yes, this is the same Kieron who kidnapped her only a few weeks back.

However, Kelly had been double crossed, with Kieron set to make the hit look like a murder-suicide.

Taking to the roof of an old mill, he ordered Kelly to jump. Although, his plan was scuppered when Aadi ended up getting shot.

Following the shooting, Kelly made the heart-breaking decision to break up with Aadi (talk about kicking a man while he’s down) and leave Weatherfield altogether.

After giving her statement to the police, she returned to Victoria Court, where she confronted both Maria (Samia Longchambon) and Gary.

Gary finally revealed the full story behind Rick’s murder and told her that he didn’t care if she’d told the police the truth.

As Kelly left, she revealed that she had kept his secret, but that she needed to get away and go somewhere she could be ‘just Kelly’.

She made her way onto the cobbles, bags packed, as the closing credits began to roll.

Kelly’s time on the street may be over, but we can’t wait to see what Millie Gibson does next. 7 Sep 21
Toy company Mattel is staffing up its television department. The Barbie and Masters of the…
TV & Movies
0