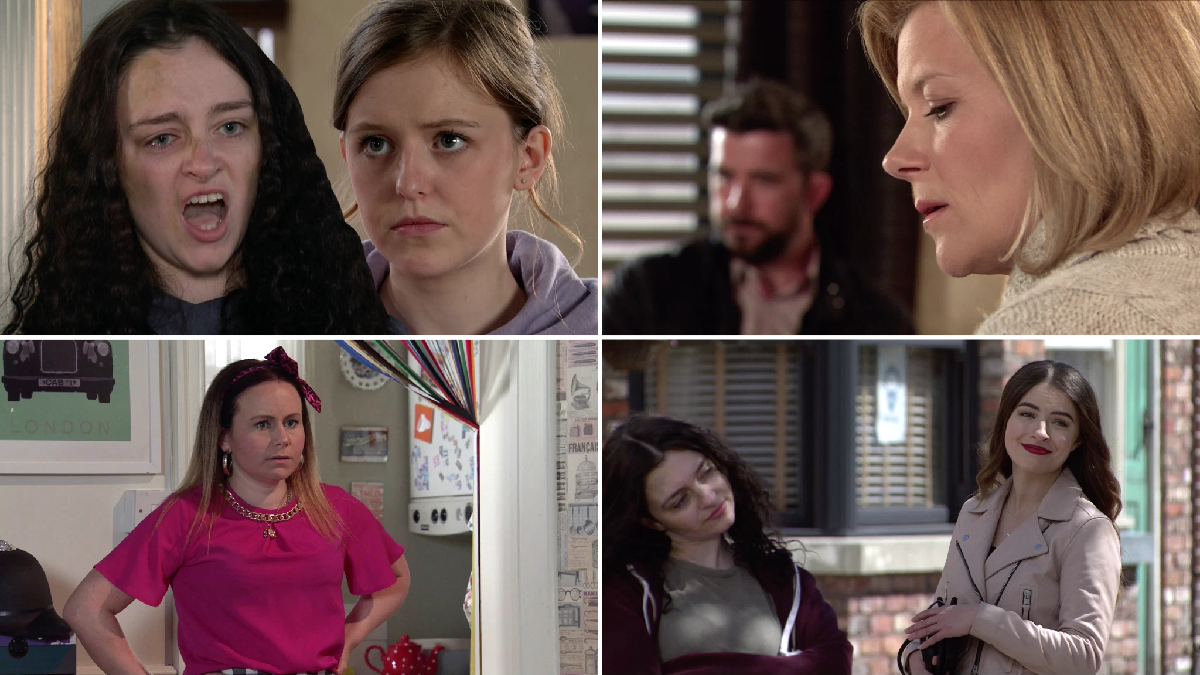 It’s a week of desperation in Coronation – Nina Lucas (Mollie Gallagher) is desperate to blot out her agony with alcohol while Harvey Gaskell (Will Mellor) is desperate to threaten Leanne Battersby (Jane Danson) out of testifying.

While things for Nina spiral out of control, she faces huge danger when she is approached by a stranger while Leanne remains adamant and Harvey begins to fear for his fate.

Having spent the night in the ginnel, Nina staggers home and lies to Roy about where she has been.

When Roy suggests Nina could work on her graphic novel, she rips at the pages, declaring it rubbish, just like her life. Roy and Asha tape it back together and post photos on Nina’s Instagram, but Nina is furious.

At the Corner Shop, Nina tries to steal another bottle of vodka, however Carla clocks her, warning that alcohol won’t solve anything.

Knocking back the wine, Nina flirts with Noah, until he advises Daisy to see her home. Daisy is about to hand Nina over to Roy, but she leaps in a taxi, leaving Roy worried sick.

When Aled’s consultant confirms he’s an ideal candidate for a cochlear implant operation, Chesney is thrilled but Gemma is not convinced.

When Gemma says she doesn’t want Aled to have the operation as there are too many risks, Chesney is shocked and asks Freda to come round to Number 5 to talk about the pros and cons of the op.

Gemma remains resolute that Aled isn’t having the operation. Chesney despairs, pointing out that Aled is his son too.

After a troubled Mary tells Bernie what she heard Dev saying to Steve, Bernie takes her revenge. Mary tears a strip off Dev for making a fool out of Bernie. Dev presents Bernie with flowers and hopes they can still be friends.

When Evelyn calls to pick up the girls, she’s gobsmacked by Tyrone’s new look. Embarrassed, he reveals Alina chose his new clothes.

Billy gets a call from Summer’s school, who are concerned about her work.

Nina has been out all night again. Roy is worried and when Nina is ill prepared for a meeting at the factory, she ends up telling Sarah to stick her job.

In The Rovers, Nina drinks with a much older guy, Hughie, who she met in town the night before. Daisy is disapproving and when Hughie suggests they go back to his hotel, Daisy confides in Abi over how worried she is about Nina.

In the hotel bar, Nina spots Tommy Orpington at a table with Corey. As Tommy shows off Corey’s ‘Best New Talent’ award, Nina tells Tommy how Corey kicked her boyfriend to death.

As they go to leave, Nina picks up the award and follows them. What will she do?

Nick, Leanne and Simon return home. DS Glynn pays Leanne a visit and underlines how important her evidence is in order to put Harvey away and prevent him from ruining more lives. Will Leanne agree?

Emma invites some friends to a cocktail evening that Curtis is running at the Bistro. Fiz’s heart sinks when Alina arrives dressed to the nines, closely followed by Tyrone in his new skinny jeans. But Fiz has the last laugh.

Summer is diagnosed as suffering from stress and anxiety. Gemma is furious when Chesney misses their second sign language lesson.