Who are Caroline Quentin's children?

Countryfile fans saw the programme return this evening to give a look back over some of the most beautiful activities its presenters and guests had taken part in over the years, after revealing just how much those across the UK had taken to the outdoors during the coronavirus pandemic. At one point, viewers caught up with actress Nina Wadia who was followed around the Scottish Highlands to take on a risky sport – but she soon encountered difficulties and warned her instructor she was struggling, telling him: “I can’t do that!”

Nina is a much-loved face on TV screens having appeared in popular dramas such as Death in Paradise and EastEnders over the years.

But tonight she was seen doing something very different as she travelled to the tranquil scenery Scotland had to offer.

However, she soon stepped things up a gear as she revealed what activity she would be showing off to viewers this evening,

She announced: “I think because of the roles I’ve played on TV, people might not know that I very much love adrenaline sports!” 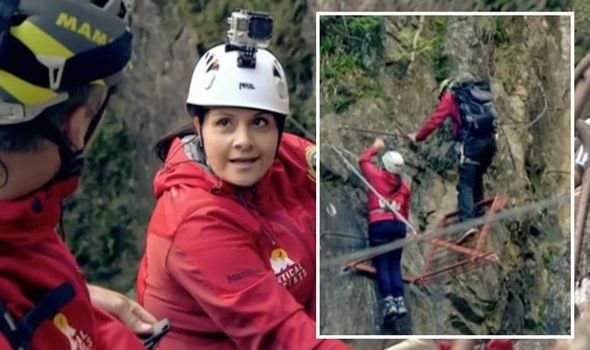 As she drove off into the beautiful scenery, Nina added: “There is a waterfall up this way and it would be amazing to go and explore around there.

“I’ve had an absolute love for doing anything that makes my heart jump and makes me think, ‘I’m probably going to die doing this!’”

She was introduced to her instructor named Ben, admitting: “I love doing stuff like this, except I like to start at the top and land down.”

Nina warned she had never done the activity named Via Ferrata before – but it didn’t stop her wanting to try it out.

As they made their way up the steep terrain, Nina warned him: “Now, go slow.”

The pair were seen swinging off some apparatus as they explored the rocks, with Ben explaining what she would have to do next.

“Now, get back on,” he instructed her – but she was clearly struggling to do so and became panicked.

Nina seemed hesitant to continue, telling him: “I can’t do that! What do I hold onto?”