John Lithgow will go down in history as one of the most formidable opponents Dexter (Michael C. Hall) ever faced. Lithgow played season 4’s Trinity Killer, who had a pattern of three sorts of victims and three methods, and he would repeat the pattern. At first, Dexter admired him because he lived a happy family life as Arthur Mitchell. However, over Thanksgiving, Dexter would learn the Mitchells’ life was not so idyllic. 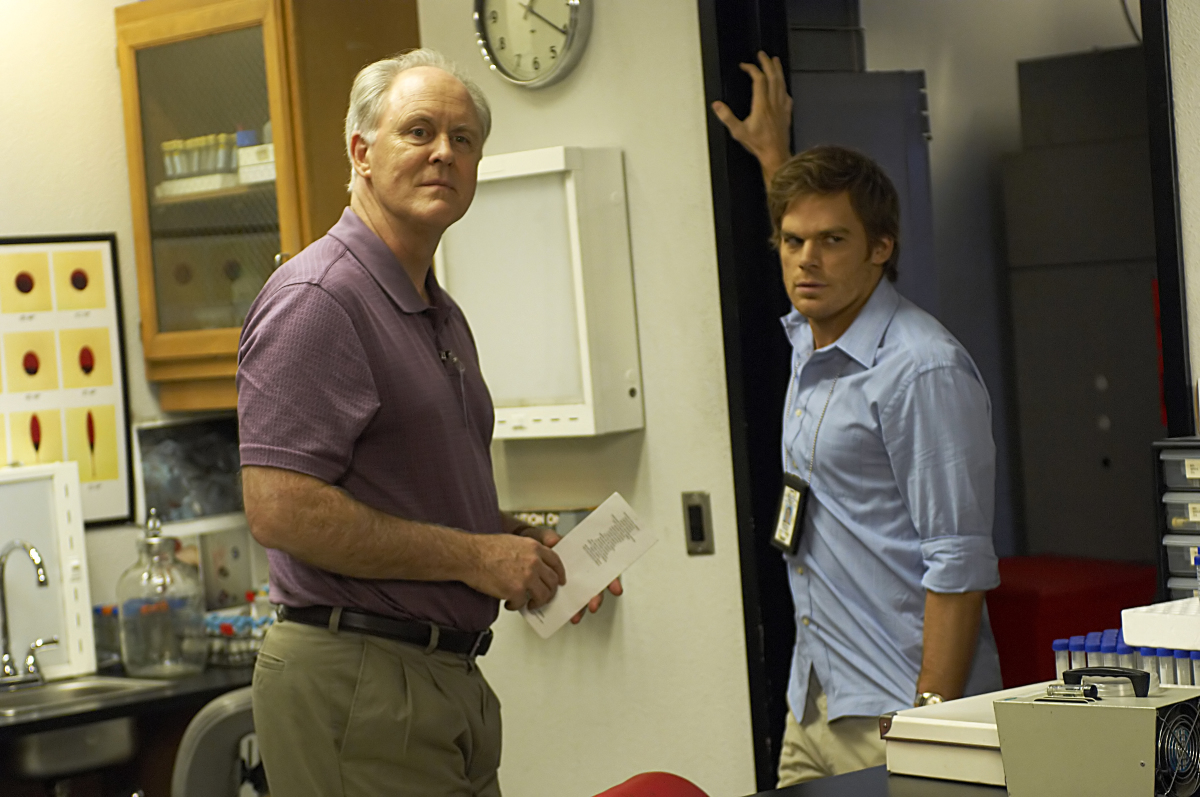 Lithgow reminisced about his time on Dexter on the Dexter: New Blood Wrap Up podcast on Nov. 2. Trinity has not shown up yet on the Showtime revival series, although Lithgow already confirmed he’s back. This Thanksgiving, celebrate with the Trinity Killer and the macabre dark comedy of the Thanksgiving episode of Dexter.

Dexter and the Trinity Killer became nemeses at Thanksgiving.

At the Mitchells’ home for Thanksgiving, Dexter observes his wife and children walking on eggshells around Arthur. Arthur also shows Dexter the coffin he built and Dexter discovers the locks on his daughter’s bedroom door. Dexter observes hints at Arthur abusing his son, too, but Arthur is careful to do it behind closed doors and make excuses. Dexter would explore violent morality in season 6’s Doomsday Killer (Colin Hanks), too. In the Mitchell house, Grace at the dinner table is when it explodes.

“It was wonderful storytelling,” Lithgow said on the Dexter: New Blood Wrap Up podcast. “The way they constructed that plot, I really can’t think of any story where the revelations are so orgasmic when they happen. The incredible Thanksgiving scene when Dexter finally, he reveals to the Trinity Killer that he is the killer and it all arises out of a squabble at the Thanksgiving dinner table among the members of my perfect family.”

The themes of spousal and child abuse, and serial killers, are no laughing matter. Arthur’s psychological manipulation proves more insidious than the likes of The Ice Truck Killer‘s overt murders, and Trinity does those too. Yet, Lithgow could see the Thanksgiving scene in terms of comedic structure. The Dexter writers set up all the pieces, but it explodes into violence instead of shenanigans. Plus, the episode, “Hungry Man,” was the ninth in season four. Viewers had been waiting two months for Dexter to really confront Trinity.

“That scene had the perfect structure of a great Marx Brothers scene or a perfect sitcom,” Lithgow said. “Everything starting so civil and genial and within three minutes, [Arthur’s son] is smashing the urn and [Dexter is] taking out a butcher knife and putting a belt around my neck and dragging me through three rooms of the house, throwing me on the kitchen floor and putting the knife right up to my neck.”

John Lithgow and Michael C. Hall had a good laugh about the Thanksgiving scene

Hall and Lithgow had already had eight episodes of playing nice as Dexter assumed the identity of Kyle Butler. They had their separate murderous activities, but “Hungry Man” was where the truth finally came out. Lithgow and Hall couldn’t help but see the comedy in what they were acting out. And consider after this scene, Dexter goes home to have Thanksgiving with Rita and Harrison.

“We did this amazing master shot of all this action and as soon as they said cut every time, Michael and I would just laugh our heads off,” Lithgow said. “It was such high stakes drama and it made it so hilariously funny to us somehow. It was the result of this extraordinary chess game, the way this story developed. Who is going to find out what about the other? Because each of them has such a complicated set of secrets.”

9 Nov 20
NICOLE Scherzinger is going through a purple patch in her love life at the moment.…
TV & Movies
0 4 Jul 21
Coronation Street: Daisy tries to set Jenny up with NeilWhen you subscribe we will use…
TV & Movies
0