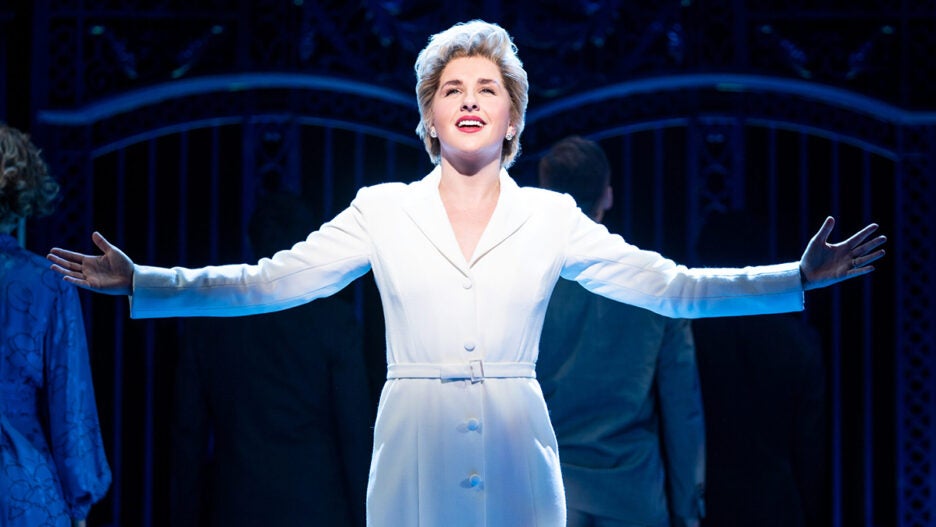 Broadway has a history of making classic rock musicals about powerful blonde women who have used their looks, their style and their fashion sense to captivate a nation. Andrew Lloyd Webber and Tim Rice did just that in the late 1970s with “Evita,” a show with a lumpy book that nonetheless succeeded on the back of a dynamic lead female role and a pulsating rock score full of memorable hooks.

Like that show about Argentine powerhouse Evita Perón, Joe DiPietro and David Bryan’s new musical “Diana” lands (at Broadway’s Longacre Theatre) a quarter century after its heroine’s death. But despite the best efforts of a hard-working cast and design team, this production is about as welcome as Prince Andrew at a royal gala.

It’s not clear why DiPietro and Bryan, two New Jersey boys who found Tony-winning success with the 2009 musical “Memphis,” decided to write a show about Princess Diana — but it’s clear that ignoring the adage “Write what you know” is just the first of the many stumbles in bringing this misguided production to barely two-dimensional life. 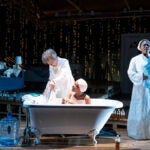 We meet Diana (Jeanna de Waal) as a 19-year-old kindergarten helper just after she’s first met Prince Charles (Roe Hartrampf), a stern and priggish figure whose stiff upper lip extends from head to toe. Charles’ still-married girlfriend, Camilla (Erin Davie), helps to play matchmaker — and then continues to consort with Charles on the side. (“I admire your patience,” Judy Kaye’s Queen Elizabeth declares when they finally meet, post-divorce.)

But DiPietro’s book plays less like a song-studded version of “The Crown” than some provincial British pantomime — from the bawdy comic relief of Diana’s step-grandmother Barbara Cartland (Kaye again) to the casual cruelty of Hartrampf’s Charles who at one point elicited oh-no-he-didn’t boos from the audience. Yes, actual boos and catcalls. Hell, the second act opens with a cringey number called “Here Comes James Hewitt” that introduces Diana’s extramarital lover shirtless and on a saddle. (Cue the horsey double entendres.)

Director Christopher Ashley mercifully sets the pace at a gallop — even the Netflix filmed version of the show, which started streaming last month, doesn’t allow for a slow fade between scenes — which barely gives an audience a moment to consider the absurdities of plot and characterization.

The real star of this production is costume designer William Ivey Long, who faithfully reproduces Diana’s signature fashion looks — including that famed wedding gown and the slinky Christina Stambolian off-the-shoulder black dress that inspires a painful song about how “Revenge looks best in a f— you dress, a f—ity f—ity f—ity f—ity f— you dress.” Indeed, this is the rare show where the (many) costume changes, some of them onstage and mid-song-and-dance number, elicit more applause than any single song in the entire show. 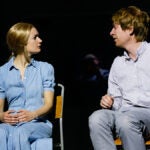 Stealing a page from Lloyd Webber and Rice, Bon Jovi veteran Bryan fills his score with bombastic guitar riffs as well as a series of interchangeable, mostly derivative power ballads — which de Waal delivers with great skill and an enviable vocal range. (Kaye’s Elizabeth also gets a nice second-act number, set to military drums, about her pre-coronation days as “An Officer’s Wife” — perhaps convinced there was a time when she was just like us, or at least just like Diana, a lonely queen-in-waiting with an absentee and unfaithful husband.)

But the lyrics, credited to both DiPietro and Bryan, can’t hold a candle (in the wind or otherwise) to the work of artists who have a grasp of the subject matter, or for the natural contours of storytelling and wordplay. “Harry, my ginger-haired son,” de Waal’s Diana sings into an onstage cradle at one point, “You’ll always be second to none.”

The idea of sloppy seconds is apt, since DiPietro and Bryan keep inviting comparisons to earlier, better works. When Tim Rice name-checked a high-end designer like Christian Dior in “Evita,” he cleverly turned the fashion icon into a verb (“I came from the people, they need to adore me / So Christian Dior me from my head to my toes”). But the “Diana” duo settle for a knockoff, outlet version that’s not even ready to wear: “A pretty, pretty girl grows more famous than before / When she decides to wear the latest from Dior.”

It’s certainly not poetry; it’s barely even prose. An English rose deserves so much better.

5 Apr 21
Hi, are you mildly curious about whether Peter Weber is single? Cool, welcome. As a…
TV & Movies
0 9 Feb 21
Marcella: ITV release trailer for brand new seriesWhen you subscribe we will use the information…
TV & Movies
0