Did Quentin Tarantino tack on anything extra as part of his ninth film? 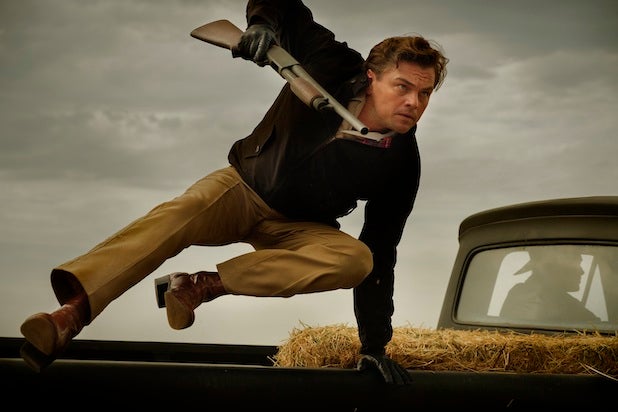 “Once Upon a Time…in Hollywood” is Quentin Tarantino’s ninth film, and while his movies have always in one way or another been something of an ode to cinema and to the lesser-known films and stars of Hollywood, this movie is especially so.

Leonardo DiCaprio’s character Rick Dalton plays a fading TV cowboy who wasn’t able to pull off the transition to becoming a movie star like Steve McQueen. Tarantino said that both Dalton and the fake movies in which he stars are actually an amalgam of many actors who went through similar trajectories: guys like George Maharis, Ty Hardin, Edd Byrnes or Vince Edwards. If you forgot about some or all of those actors (or never heard of them), that’s kind of the point Tarantino is making.

And throughout “Once Upon a Time…in Hollywood,” Tarantino has fun with that premise by staging clips and designing movie posters for each of those fake films within Rick Dalton’s career, which are peppered throughout the movie’s narrative.

So while we know Tarantino loves to indulge in this sort of stuff and frequently has released new director’s cuts of his films with footage that didn’t make it into the theatrical version, he’s not usually one to add more after the credits have rolled. But all the same, does “Once Upon a Time…in Hollywood” have a post-credits scene?

The answer is yes. The film has a mid-credits scene featuring DiCaprio as Rick Dalton that plays as the credits are rolling. It’s nothing crucial to the plot or a teaser for something new if you absolutely have to get out of there, but it’s a fun scene all the same that feels like something that could’ve played during the film if Tarantino had chosen.

Leave now if you don’t want to read spoilers for the mid-credits scene in “Once Upon a Time…in Hollywood.”

The credits start to play over the film’s final shot and do so for about a minute. But shortly after the freeze frame fades out, we see another glimpse of Rick Dalton as the credits continue to roll. It’s a clip of Rick Dalton shot in black and white and filming a commercial for Red Apple Cigarettes. He proudly touts that these cigarettes come factory rolled and have less burn on your throat than any other brand!

“Better drag, more flavor, less throat burn,” Dalton says with a straight face. He takes a puff and holds a smile for a moment, and then spits out the cigarette and throws down the package, saying that the cigarettes “taste like s—.”

For any Tarantino experts out there, Red Apple Cigarettes have actually appeared quite frequently in Tarantino’s other films. They’re a fictional brand of cigarettes that can be seen smoked by Tim Roth’s character in “Pulp Fiction” or as a billboard ad in “Kill Bill,” among others. They even had them in the Civil War! Kurt Russell’s character can be seen with a pack as well.

Tarantino then ends the credits by digging deep into his ’60s archives. He plays an audio clip of the “Batphone Secret Number Contest.” In it, you can hear “Batman” stars Adam West and Burt Ward introducing a contest on KHJ Boss Radio in which listeners had to decipher a series of clues that led to the number of the Batphone that’s seen in the show. The listener with the first correct answer would get to visit the set, have lunch with West and Ward and win a 1966 color TV. The contest aired in Jan. 1966, and you can listen to it here.

11 Sep 20
We will use your email address only for sending you newsletters. Please see our Privacy…
TV & Movies
0 28 May 21
Over the years, Vivica Fox has had her fair share of high-profile relationships. Some of…
TV & Movies
0