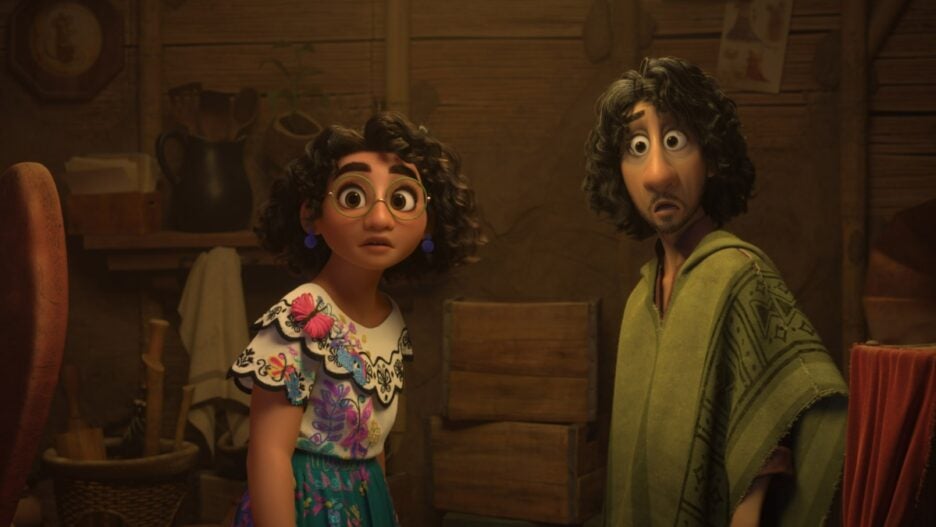 “Encanto” is Disney’s latest animated classic, a story of family and hope in Colombia, where the Madrigal family has been gifted with magical abilities. Featuring a handful of new songs by Lin-Manuel Miranda and absolutely stunning animation, “Encanto” is a new favorite. It’s also surprisingly complex, with its early 20th century setting allowing for real life tragedy to punctuate the storybook magic. And the ending is even more complicated – and requires a proper deep dive.

Warning: huge spoilers for Disney’s “Encanto” follow. If you haven’t watched yet, turn back now!

The Story So Far

“Encanto” is a tale of magic. During the prologue we know that a magic candle was gifted to Alma (María Cecilia Botero) following the death of her beloved husband. (The film takes place in the “first part of the 20th century,” according to the filmmakers.) The candle granted her family transcendent gifts, and created a safe haven for her family and others, with mountains rising in the distance, keeping everyone safe.

When we rejoin the family, it has grown considerably – the family tree has sprouted many branches. But our main character is Mirabel (Stephanie Beatriz), a young member of the Madrigal family and seemingly the only one not given a gift. Still, she has a great relationship with the enchanted house (it has a distinct personality) and she takes care of the kids before they are assigned their gift (when they get their gift they also get their own room, which has magical qualities, able to expand to fit whatever their unique ability is).

On the night her nephew Antonio gets his gift (he’s able to talk to animals, including an unamused capybara), she sees a shocking vision of the casita cracking and the magical candle flickering out.

While she thinks that she is the only one who sees this, her super strong sister Luisa (Jessica Darrow) also notices it. It sets Mirabel on a path to reconnect with her estranged uncle (emphasis on strange) Bruno (John Leguizamo), whose gift is to see the future, and who “disappeared” many years ago. In meeting and befriending Bruno, she attempts to stop whatever is happening to the magic, before it goes away forever.

But before she can complete her mission, the flame of the magical candle blows out. The house goes quiet. The mountain range that encircles their community cracks, leaving their village exposed. Could the lack of magic signal the end of the Madrigal family?

What Happens in the End

Mirabel connects with Abuela Alma, her grandmother, who Mirabel feels has always been to harsh on her. (Alma blames Mirabel for the calamity.) She explains that her beloved husband was murdered while they were attempting to flee. Mirabel gains a better understanding of her grandmother and her grandmother gets a better understanding of Mirabel. Together, they return to the house, where each of the family members, all of them non-magical now, chip in to fix the house. They come together, not because of their powers, but because they love one another. Once the house is fully mended, they hand Mirabel a doorknob with an “M” on it. She puts the doorknob on the front door and turns it and the house returns to its magical glory (and the powers return to the family members). As it turns out, Mirabel’s gift was saving the family (and the casita). No, you’re crying!

What It Means (With Director’s Commentary!)

There is one key piece of the “Encanto” world that doesn’t get put back together, specifically the mountain range that now has a a big crack in it. When TheWrap asked directors Byron Howard and Jared Bush and co-director Charise Castro Smith if this was key to the film’s finale, Bush confirmed that it was. Then Castro Smith elaborated.

“It was always this concept of when this kind of terrible foundational moment happened to the family, they were closed in and protected, but they were also sort of closed off from their past,” Castro Smith (who also co-wrote the screenplay with Bush) said. “It was really intentional for the mountains to not completely close back up because now they’re able to see their past and interact with it in a healthy way without blocking it off. So you caught a very important detail there.”

In narrative terms, the opening of the mountains means that more people can visit or live in that perfect slice of Colombian soil. Which could also mean big things if the story of “Encanto” is expanded or elaborated upon in the years ahead (considering how many Walt Disney Animation properties are being revived for Disney+, it seems likely). Perhaps the question of what an outsider would think of the Madrigal family and their magical abilities will be answered.

“Encanto” is in theaters now and on Disney+ this Christmas. 29 May 20
Gabrielle Union's departure from America's Got Talent continues to make headlines. As fans of the…
TV & Movies
0

25 Jul 20
NICOLE Scherzinger, 42, stunned in a black bikini in a loved-up selfie with her boyfriend…
TV & Movies
0