After making history at the Oscars, Nomadland‘s Chloé Zhao is on to her next feat: her own film in the Marvel Cinematic Universe. This fall, we’ll see her imprint in the superhero franchise with Eternals, which follows a group of godlike beings in the comics pantheon. Like most installments in the MCU, the cast is loaded with A-listers and the production is already shaping up to be larger than life. Here, everything we know about Zhao’s superhuman feature.

Eternals will release on November 5.

The film will get a wide release on Friday, November 5. With cities across the United States slowly reopening, it might be safe to assume that Eternals will release in cinemas rather than online at Disney+. We’re going to want to see this on a big screen. 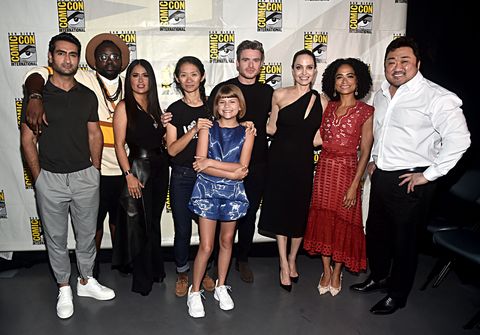 The plot takes place after the events of Endgame.

Eternals takes place somewhere in the wake of Earth’s big standoff with Thanos. “Following the events of Avengers: Endgame, an unexpected tragedy forces them out of the shadows to reunite against mankind’s most ancient enemy, The Deviants,” the official synopsis from Marvel Studios reads.

But let’s backtrack to the basics: Who are these supernatural creatures anyway? They were created a long time ago when the alien Celestials came to Earth and experimented with the human race, according to Screen Rant. The result were powerful, immortal beings known as the Eternals and evil, less-evolved creatures known as the Deviants. The Eternals have disguised themselves among humans for centuries, protecting the planet against their destructive counterparts.

The cast is absolutely stacked.

We already have our first look.

We’re still waiting for official trailers, but Marvel did share a sneak peek at Eternals in a video previewing the studio’s upcoming projects. Jump ahead to the 2:20 mark below for a glimpse of Zhao’s aesthetically pleasing MCU film.

Fans might have also caught some behind-the-scenes photos while Eternals was in production, such as this moment of Jolie filming in costume or this sweet snapshot featuring Harington and Hayek.

Brian Tyree Henry plays Phastos, the first openly gay superhero in the MCU. Little America star Haaz Sleiman plays his husband, and they have a child together. The two share a kiss on-screen, which Sleiman described as a “beautiful, very moving” moment. “Everyone cried on set,” he told NewNowNext.

Marvel boss Kevin Feige says Phastos’s relationship “was always sort of inherent in the story and the makeup of the different types of Eternals,” he told The Hollywood Reporter. “I think it is extremely well done, and I look forward to that level of inclusion in our future movies being less of a topic.”

Makkari is depicted as a hearing man in the Marvel comics, but will be portrayed by deaf actress Lauren Ridloff in the film.

“I am more thrilled than overwhelmed about being given the opportunity to represent the deaf community,” she previously said of her role. “I’m very thrilled about that—just to bring in that storyline within the MCU. I think there’s plenty of room for more stories like that.”

Of the inclusive casting, Zhao told THR, “I wanted it to reflect the world we live in.” 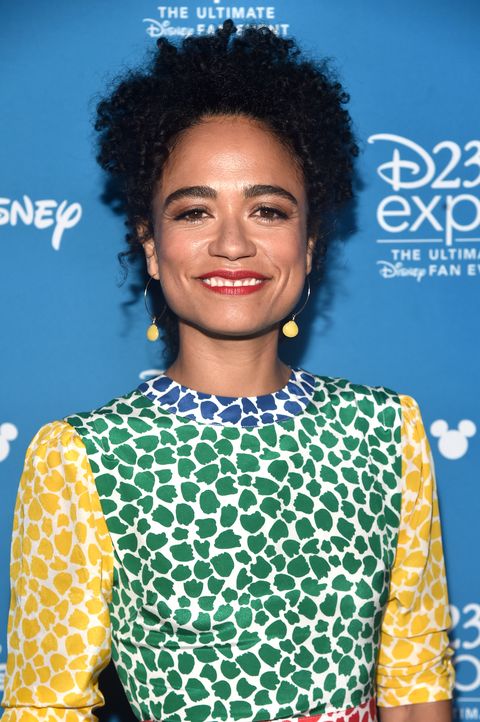 Nomadland viewers might notice some cinematic similarities between the Best Picture winner and the MCU project. “I shot exactly the way I wanted to shoot,” the director also told THR. “On location. A lot of magic hour. Three-hundred-sixty degrees on the same camera as I did on Nomadland. Same rigs.”

Feige noted that Zhao insisted on filming on location, even though most Marvel movies are heavy on green screen and visual effects. While watching an early cut of the footage, he was stunned.

“And I had to keep saying, ‘This is right out of a camera; there’s no VFX work to this at all!'” he told Variety. “Because it was a beautiful sunset, with perfect waves and mist coming up from the shore on this giant cliffside—really impressive stuff.”

He noticed some visual parallels in Nomadland too. “That is not just what she wanted to bring to Marvel. This is a signature style,” he remembered thinking.