Filmmaker who so often strays from conventional narrative continues to with a focus on her father, Ira Sachs Sr. 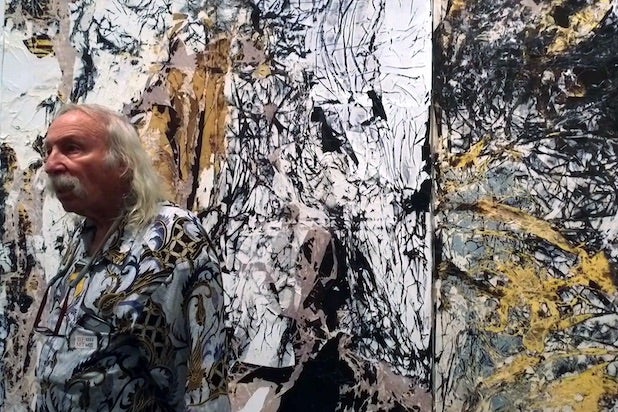 A documentary as fragmentary and frustrating as memory itself, Lynne Sachs’ “Film About a Father Who” is the second film in the last year in which a nonfiction filmmaker has constructed an elusive look at her own father. But where the twists in Kirsten Johnson’s “Dick Johnson Is Dead” are playfully morbid, Sachs’ film is darker and more disconcerting; Johnson may entertain us by staging her father’s death, but Sachs disturbs us by delving into her dad’s life.

The result is another challenging piece of work from a filmmaker who has never been particularly interested in conventional narrative. “This is not a portrait,” she says at one point in the film. “This is not a self portrait. This is my reckoning with the conundrum of our asymmetry.”

“Film About a Father Who,” which opens in virtual cinemas on Jan. 15 to coincide with a retrospective of Sachs’ work at the Museum of the Moving Image in New York, is in certain ways as thorny as that definition. And it’s also a conundrum itself — a film that was clearly made with affection, but one from which the audience is liable to walk away without much of its own affection or sympathy for the central figure, Ira Sachs Sr.

At the beginning of the film, he’s established as a charming, amusing figure: a “hippie businessman” who made work calls on an early mobile phone from the ski slopes of Park City and lived by Nietzsche’s quote, “Don’t trust the flatlanders,” a man for whom every Thursday was “Bob Dylan Day,” and a big spender who owned two Cadillac convertibles but painted them both the same shade of red so his mother wouldn’t think he was unduly extravagant.

But that was just his cute, colorful side. Beyond that, Ira Sachs appears to be a deeply selfish man who, in the words of one of his daughters, “had his own language, and we were expected to speak it.” He’s an inveterate philanderer who has nine children with five different women — a lifestyle despised by his mother, who says she can only accept him “as a child who’s handicapped.” And he’s a deeply scarred person who will rarely if ever acknowledge his own hurt, or the hurt he caused others.

The details emerge piecemeal over the brisk 74-minute running time, but they’re organized in a way that feels purposefully disorganized. The narrative is full of stops and starts, jumping around in time and format from 1965 to 2019. Cameras, often as not, are in the frame; much of this footage documents somebody documenting Ira. (Lynne isn’t the only filmmaker in the family; Ira Sachs Jr. is a director who made “Love Is Strange” and “Frankie,” among others.) Eventually, it all starts to jumble together and look the same: Ira Sr. with young women, with kids, with different young women and different kids, and always with the same grin on his face and, often, with the same refusal to answer questions.

“He’ll give you a truthful answer,” says one of his children at one point. “But you gotta ask the right questions, which you won’t.”

It starts to feel repetitive as the film turns into a chronicle of Ira’s many girlfriends, with the family struggling to catalog them all: “Then there were the subsidiary girlfriends: Mitzi, and somebody named Sunday or Monday or something … “

Late in the film, the family, already confusingly large, expands even more as Lynne Sachs introduces two additional children that her father kept hidden for 20 years because his mother had threatened to cut him out of her will if he had any more kids. Those children, too, struggle to come to terms with their father, making the film less about Ira Sachs Sr. than about the family that can’t figure out how they should feel about him.

But that confusion is key to “Film About a Father Who,” which was named after Rainer Werner Fassbinder’s deeply ambivalent 1974 movie “Film About a Woman Who … ” At one point in the film, Lynne Sachs says that she’s been working on making a film about her dad for 26 years — and if judging by the footage, she hasn’t really come to any conclusions about him after 26 years that she couldn’t have come to after 16 years, or six years, that’s part of the point.

In another section of the film, Lynne Sachs reminisces about her dad with one of her sisters, and they conclude that while their mother lived a life punctuated with orderly commas and periods, their father’s existence was all exclamation points and question marks. In a way, that’s what “Film About a Father Who” is, too: jagged and disorderly, confounding and charming and sometimes irritating — just like the man at its center.

There's a new magic school on the block, and it's home to some very familiar characters. While the distinguished Alfea...