On Friday, Good Morning Britain hosts Ed Balls and Kate Garraway were joined by Vice President of PETA programmes Elisa Allen and TalkTV broadcaster Kevin O’Sullivan to debate a sex ban for men who eat meat. However, the proposal was hit with backlash and Kevin claimed it was “sexist”.

The breakfast show discussed a report from the German branch of PETA which stated that 44 percent of men were responsible for more greenhouse gas emissions.

As a way to curb the rise, the charity suggested their partners should go on a sex strike.

Guest Kevin O’Sullivan hit back at PETA as he stated: “I want to say from the outset I don’t eat meat and I didn’t stop eating meat because I was banned from having sex.

“I kind of congratulate PETA for this initiative because it’s very eye-catching, we’re discussing it, it’s been in all the papers but of course it’s absurd.” 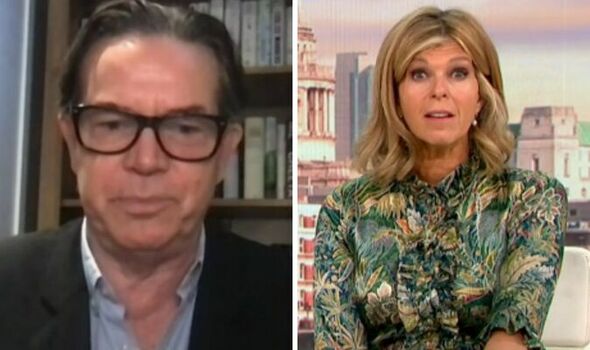 The broadcaster added: “It comes out of the PETA organisation in Germany which seems to have depicted all men as blokes with big grills by the barbeque cooking up huge steaks and scoffing them.

“While their wives exist on a diet of lettuce, for a kick-off I think this proposition is sexist.”

The debate also sparked backlash with viewers who took to Twitter with anger, this included @Fairsquare00 who wrote: “Just when you thought PETA couldn’t get more ridiculous.”

@DanJames16 tweeted: “These vegans are unbelievable.”

@GGenaral5 stated: “This is a genuine news story tonight like what the actual f**k.”

As @CarlBarnard15 added: “The world has officially gone mad!! Ban men from having sex (only men) because they fart too much and produce to much gas emissions and she’s deadly serious.” (sic) 21 Jun 21
GMB: Rachel Johnson discusses father's 2020 holidayWhen you subscribe we will use the information you…
TV & Movies
0