The 54-year-old nailed his portrayal of the philanthropist, donning a white suit, black pants and black ribbon tie. He was also joined by Celina Smith, who will play Annie on the highly-anticipated live musical special, which is set to air this December.

At the 2021 Macy’s Thanksgiving Day Parade, the 12-year-old showed off her singing skills by singing the iconic “Tomorrow” from the musical. Celine and Harry later teamed up for a sweet performance of “I Don’t Need Anything But You”.

Additionally, Harry took to his Twitter account to share a picture of himself at the festivity. “Happy Thanksgiving! Coming at you live from the #MacysParade! Who saw the #AnnieLive performance? My girl Celina Smith blew me away!! See you next Thursday on @nbc !” the Grammy-winning actor wrote. 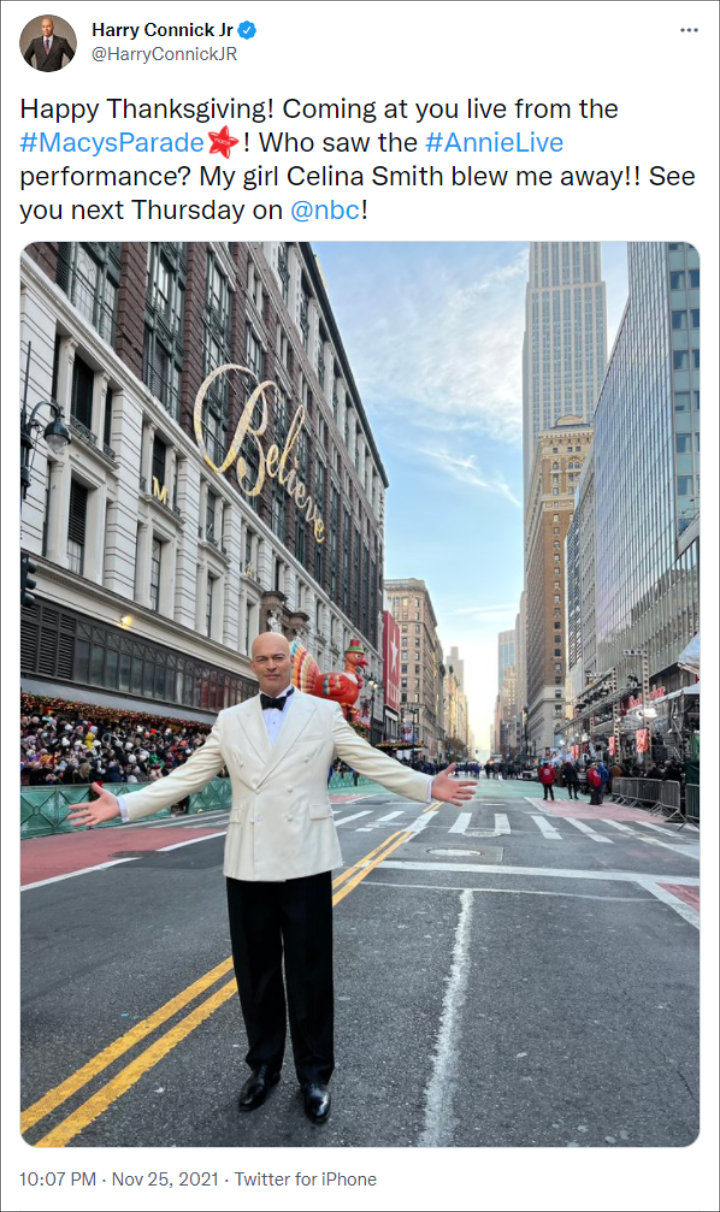 In related news, NBC has treated fans to a trailer for “Annie Live!” The brief video, which was unleashed on Thursday, shares a glimpse of the highly-anticipated live musical that also stars Taraji P. Henson, Nicole Scherzinger, Tituss Burgess and Megan Hilty.

For those who wondered if Harry really shaved his head for the character, the star revealed to “Today” hosts Hoda Kotb and Jenna Bush Hager last month that he wore a bald cap for the role. “I’ve never had a bald cap on. I kept looking at myself. I was blown away. How do you do that? It’s such an art form,” he explained. “If this was Broadway and eight times a week, I don’t know if I could put the bald cap on every day.”

Back in June, the legendary performer showed excitement for being cast in the upcoming live special. Noting that he watched “Annie” countless times with his three daughter, the actor said, “It’s such a classic show and it’s a show that I’m so familiar with, just from seeing it a million times. And it’s one of those things where you watch it and enjoy it and never really imagine yourself a part of it, so when I was asked to play Daddy Warbucks it was kind of surreal because that’s such an iconic role.”

18 Apr 21
Sunday Brunch: Jimmy Carr says he’s ‘quite hungover’When you subscribe we will use the information…
TV & Movies
0 3 May 21
Jinger Duggar followed her family's fashion rules for years, but when the "Counting On" star…
TV & Movies
0