In recent months, the tech giant hasreportedly reached out to media companies about such deals, per Bloomberg. We don’t know what kind of companies Apple is engaging with (indie production studios or established networks), and we don’t know what sort of shows they’re targeting (hits like “Serial” or brand new projects), perHot Pod. 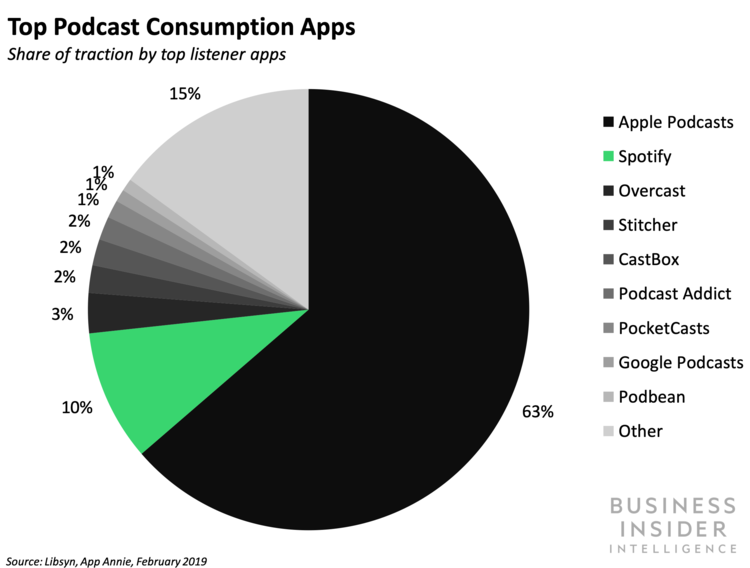 What this move is about: Apple likely views exclusive originals as a way to protect its dominance of podcast listening, which has slipped in recent years as rivals like Spotify bear down.

Since Apple launched its Podcasts app for iOS in 2012, it has dominated share of podcast consumption and arguably driven much of the format’s growth, but rivals are fast on its heels. Apple’s share has slipped from 80% to 63% in recent years.

Smaller distribution apps like Stitcher (2%) and Overcast (3%) have earned a sliver of the market, but Spotify is the true thorn in its side. Despite onlyadding podcasts in 2015, Spotify has gained a10% share of podcast listening as of February 2019, perLibsyn analysis of App Annie data.

But its ambitions go far beyond that: In the first half of 2019, Spotify spent over $400 million on podcasting-related companiesGimlet,Anchor, andParcast; secured exclusive deals with popular personalities like Amy Schumer, Jemele Hill, and theObamas; and it continues to remove friction from podcast discovery and delivery on its app. Securing exclusive podcasts for its platform could give Apple some increasingly necessary insurance against Spotify’s advancements.

What it’s not about: Despite recent (Luminary-inspired) buzz about podcast subscriptions, it’s pretty unlikely that Apple aims to convert the exclusive rights it obtains into a paywalled, “Netflix for podcast” product.

Apple currently makes no direct money from podcasts distributed on the Podcasts app, and hasn’t shown a desire to do so. Plus, at least so far, subscription-based podcast services likely aren’t compelling enough for consumers who are acclimated to accessible, free content. The chief example is Luminary, which launched this spring, and has reportedlystruggled to build traction, despite exclusive shows with the likes of Trevor Noah and Lena Dunham.

The bigger picture: Apple could be moving toward free, high-quality exclusive content as a marketing device to attract and retain consumers — a member perk somewhat like Amazon Prime Video is to Prime.

It’s conceivable that Apple views exclusive podcasts as a path to further boost the overall value of its hardware ecosystem, in tandem with its broaderServices push. I’ve previously argued that Apple could launch some kind of abundled offering that combines its various services, Apple Music ($10 a month), Apple News+ ($10 a month), the forthcoming Apple TV+ and Apple Arcade for gaming (pricing TBD for both).

In theory, podcast exclusives — even for free — are well-situated in that array, and even if Apple doesn’t decide to roll out a subscription podcast tier, having exclusive shows nevertheless enhances Apple’s media mix in a way that makes its hardware more appealing. Similarly, it’s been speculated that Apple TV+, which will have several premium offerings featuring high-profile talent like Oprah, would be offered forfree for Apple device owners.