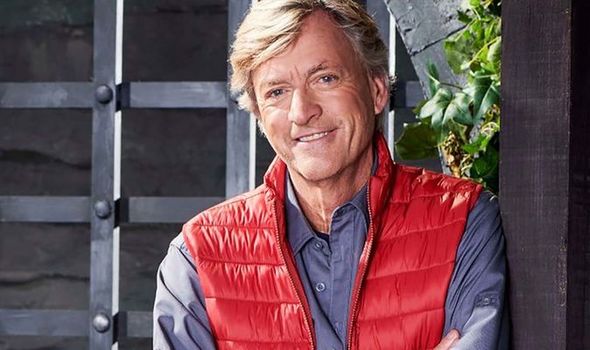 The 65-year-old TV presenter has been in isolation for two weeks without Judy as he prepares for the opener on Sunday. And he insists he is already finding it difficult.

Daily Express columnist Richard said: “On Sunday, that’s our 35th wedding anniversary actually. So that will be the first wedding anniversary that I’ve missed and it’s a big one. I gave her a present before we left and a card which she will open on the day.

“We’re going to really miss each other. I’ll miss her a huge amount.

“I spend every day of my life with her, either working with her or in the house.

“She wasn’t exactly doing back handsprings of delight up the stairs or down the corridor, but I didn’t just do it without talking to her.

“We talked about it and I explained why I thought I probably should do it.

“She agreed and she thought I would get a lot of pleasure out of it and a lot of stimulation out of it.

“So she said go for it and it will be something to talk about.

“She doesn’t enjoy being on her own but she’s got lots of support from the kids. She’s missing me, but she gets it. She’s okay.

“We will make up for it when I get out. It is the longest time by far we ever spent apart.

“I think the only other time we’ve spent more than a week apart was two or three years ago when I did The Circle on Channel 4, and we were apart for about 10 days. And already we’ve been apart for almost two weeks.

“We had to hand in phones and laptops and everything. So I can’t even talk to her.”

Richard and Judy, 73, met in 1982, when he joined Granada Television to work in a presenting team that included Judy.

Richard continues to front shows, and was most recently seen on Good Morning Britain.

Looking ahead to I’m A Celebrity, which is being filmed in Gwrych Castle, North Wales, Richard said: “I watch it and occasionally you see a ‘celebrity’ who clearly doesn’t want to be there.

“And they start wailing and moaning.

“And you think, “Well, what did you go in for? Surely you understood what this programme was.’

“I think, going on this, it’s a bit like going to a great big party with silly forfeit games, and that’s how I’m regarding it. I’m regarding it very much as a piece of entertainment, not just for people watching it, but for me doing it.”

He might not have to wait too long for a bit of drama, with bookmakers listing him the favourite to do the first trial.

I’m A Celebrity…Get Me Out Of Here! starts on ITV on Sunday at 9pm 19 Mar 21
ALESHA Dixon has been a household name since her early days in Mis-Teeq, and more…
TV & Movies
0 7 Nov 21
Nicole Kidman is one of the world’s biggest stars, an actor known as much for…
TV & Movies
0